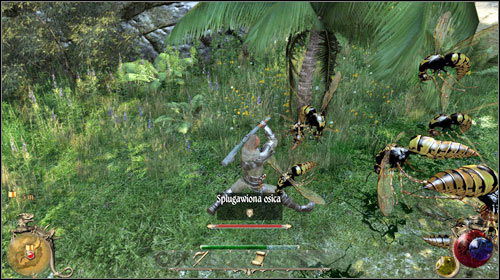 After you give the speech about monsters in [Science Career], you will be waylaid by Professor Apis, who will offer you a science grant. You will learn more in his office (M23:9), he will give you an offer of gaining some information in exchange for 2000 auras. Your task indeed consists of getting rid of the Blighted Vespines from the apiary, in which researches on increasing the honey production using pheromones are being conducted. The apiary can be found in the jungle (M23:61). Once you go through the gate, you will be instantly attacked by a wasp hive. After getting rid of them, return to Apis (M23:9) - you will unfortunately learn that you didn't do very well and it won't be enough to get the whole grant. You'll receive only 500 auras. 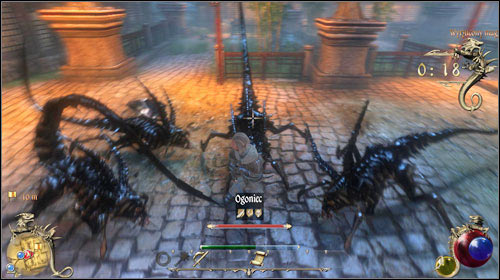 The expelled mage will ask you for help in saving his mother, who is trapped inside her house and surrounded by monsters. The house is south of town. Shui Biana will be waiting for you in front of the door (M23:34). The tricky man knows how to open it, but won't do it until you don't agree to a certain bet. In exchange for an entrance fee of 10 auras, you will be able to fight the Tailers in the garden. If you can kill them before the time (40 seconds) run out, you'll receive a prize of 2000 auras. Accept the challenge and fight them.

The task isn't easy - make sure you have lots of health potions stacked. The monsters will attack you all at once, you might not make it without having a high enough level. The time isn't as important here - if you don't make in 40 seconds, you just won't receive the 2000 auras.

After defeating all the monsters, Shui Bian will open you the door to the house (M23:35). Go inside. Go through the basement to the second part of the house - look out for the monsters living in the basement. You will find Tai Lin's mother's body. Return to him (he can be found by his house (M23:36)) and talk with him about what happened.

You will unlock [Obsession].