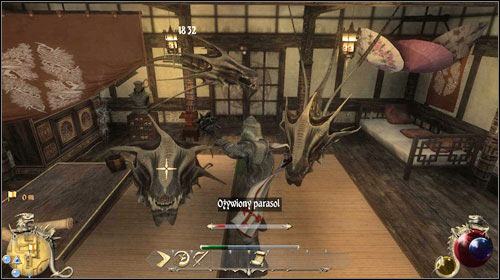 The local mystic umbrellas merchant has some fears about the items she's selling, as one of them has recently eaten its owner. She will ask you to check out on two of her clients, out of which the first one is Hai Mer. His house is quite nearby (M23:25). Inside you will find three Cursed Umbrellas. I'd suggest using a two-handed weapon, thanks to which you will be able to attack all of them at the same time. 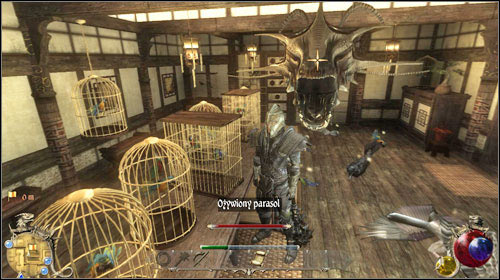 The next client is Oro Ave, a known bird breeder. To go his place (M23:38) - inside you will find only his daughter. Iga will tell you that the man went to a bird exhibition. Luckily it's being held nearby (M23:3). Apart from dead birds, you will also find one Plu Via's Cursed Umbrella there. After you deal with him, return to Plu Via (M23:22), where you will get attacked again. Talk with the shop owner. 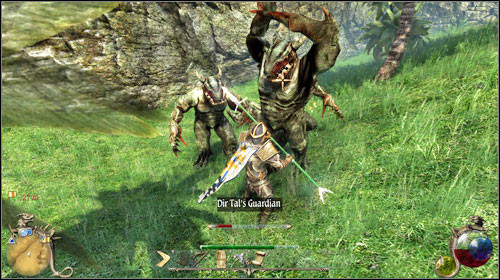 Talk with the frustrated woman. You will learn about the Scavengers - people who decided to live in the Swallows - where once the University has been placed, before the explosion. The man who the woman loved has been killed, but his body was found only recently. Their stare indicated a recent death, which surprised her. You will be asked to get the bracelet which Dir Tal used to have. The body is nearby town, by the river (M23:39). Once you get there, you will find a dead gargoyle. Pick up Dir Tal's bracelet and a couple Dir Tal Sentinels will show up. The creatures are very powerful; the fight can be quite problematic. After returning to Sol Pan (M23:38), you will learn that the man enchanted the bracelet with summoning magic, so that no one could ever take it. You can receive the next mission in her house.

You will unlock [Betrayal].