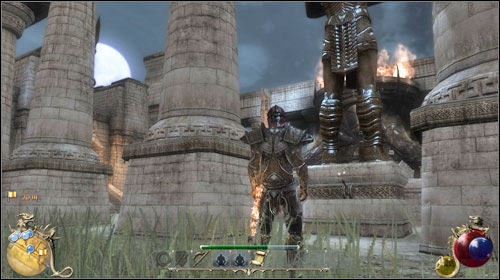 After returning to Reesa' house (M20:15) you will meet Mazon, who'll give you the Hatmandor temple plan. The entrance to the underground passage can be found at the back of the temple (M20:39), the path is guarded by a few guards. You can either pass by them (head left in the first part of the temple and you will find a door, thanks to which you won't have to pass through the middle) or try to get rid of them. When only one of the guards notices you, he will raise an alarm and the others will come running. One you're in the second part, switch the four levers at the backs of the monuments - this will open an entrance to the [Underground temple]. 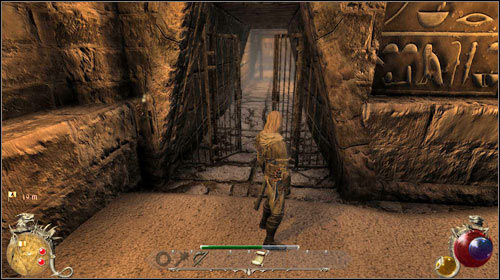 Inside the temple you will have to face Stone Sentinels - statues which will come to life once you get near them. There are also statues which won't, so keep your eyes open. Firstly head towards the lever (M22:1), thanks to which you will open the large gate. A bit further you will find yet another lever (M22:2). It temporarily opens the first and second gate. However you don't need to hurry and run through both at the same time. Between them there's another lever (M22:3), which temporarily opens the second gate. 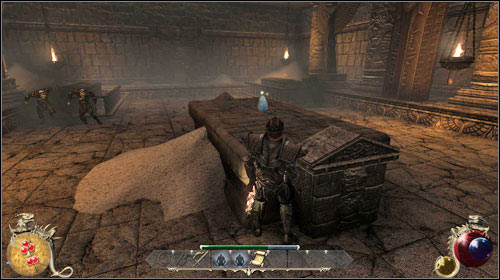 While you pass by two large statues, you will come across yet another lever (M22:4), which will open the further gate. You will eventually reach a large room, with the Maliel's Tear at it end (M22:5). A pack of mummies will attack you - begin exterminating them. Go through the second gate (they will open only after you leave the room) and head towards the exit (M22:6). Return to Reesa's house [Desert] (M20:15) and give her the item. The woman will tell you the whole truth about herself and what she really needs the jewel for.

You will unlock [The Transaction].