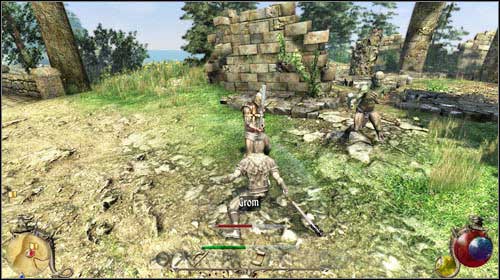 After talking with Ghortarius (M2:6), you will be asked to recover the stabilizing stone, which will improve the teleport performance. Head to the spot marked on the map, nearby the bridge (M1:10), where you will meet two gnomes between the ruins. They're not demanding enemies - search their bodies and you'll find the stabilising stone. Teleport back to Ghortiarius [Alsorna - basement - Inside Alsorna] and give him the stone. Talk with the Prophet and afterwards with Ghortarius again. You will be teleported to [Hatmandor], but will end up in [Bayan].

Once you reach the destination, you will be asked for food by a beggar - you can give him some (if you've gained the sausage already) or refuse. Whichever option you choose, you will learn about the situation in the village.

You will unlock [Getting to Hatmandor].

You will unlock [The Shipwreck].

You will unlock [Nortar's Collectibles]. 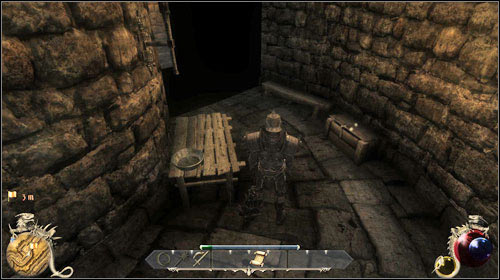 You will be able to receive the mission later in the game, once you reach the savannah.

The blacksmith will tell you to find some runestones - all for research. The first orc runestone can be found at the savannah, in the cave [Creepy Den] nearby Bayan (M3:14). Once inside, you won't have to look for long. The stone is inside the chest (M6:1) and the road leading to it isn't filled with too many monsters. Return to Sokaris [Alsorna - basement - Inside Alsorna] (M2:5) and give him the orc runestone. 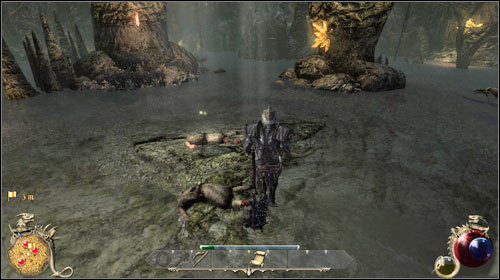 The elf runestone is the next target. It can be found at the savannah, this time a bit further to the south, in [Maladorous Cavern] (M8:7). Inside you will encounter a few Giant Scorpions. The stone itself can be inside one of the bodies (M10:1). Return to Sokaris [Alsorna - basement - Inside Alsorna] (M2:5) and give him the elf runestone. 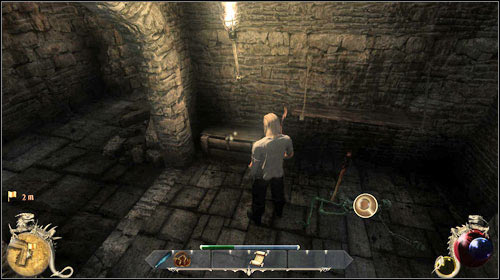 The third runestone is in New Ashos, beyond the Swallows [The Swallows Region], in one of the caves [Ancient Tombs] (M35:1). Inside you will have to face Elepharachnids and Necrises. Go up the stairs (M36:1) to the upper level of the tomb. Upstairs [Ancient Tombs - upper level], clear your way to the chest containing the human runestone. 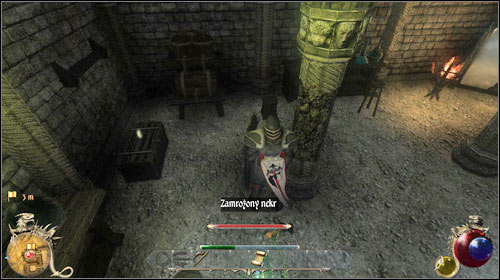 The last one, the dwarven runestone can also be found in New Ashos at the border of [The Swallows] (M26:15). Inside the cave [Mystical Den] you will find mostly Ice Necrises (don't forget about using maces). Pick up the rune (M29:1) and return to Sokaris [Alsorna - basement - Inside Alsorna] (M2:5), who will this time generously rewards your efforts.