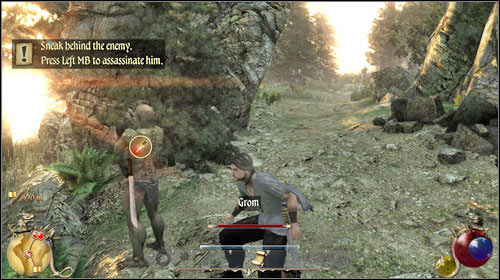 Dar Pha Has fallen into a trap (M1:1) and is unable to move - you have to get help. Search for the teleport which will move you to the orc camp. You will also receive a dagger, thanks to which you will be able to silently eliminate the enemies. Go forward and after a couple steps you will see the first Gnome (M1:2). Sneak to him and use the dagger to assassinate the enemy. 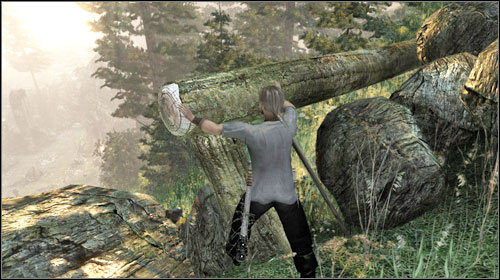 There are two more Gnomes in front of the teleport (M1:3). Once more kill them silently, as you have lesser chances in an ordinary fight. Teleport to the orc camp (M1:4) and speak with Rogdor. In order to get Dar Pha to safety, you have to draw the gnomes' attention. You will learn how block during a fight (block ability will be unlocked). Defeat the first gnome. You have to use a counter-attack on the second one, that is attack while blocking. After crossing the bough (use the sneaking skill to keep balance easier), defeat the enemy by breaking his block (block break ability will be unlocked). After getting to the destination, you have to push down the giant rocks (M1:5). Head back towards the camp. 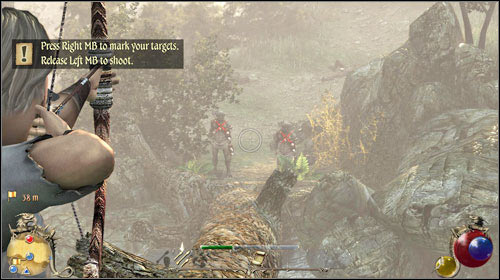 After crossing the bough, Rogdor will give you a bow, which you have to use to shoot two gnomes. The next step is shooting two enemies at once. Pull the bow (hold LMB), enter the sniper mode (by default [X]), choose the ability to shoot multiple arrows, mark your targets (RMB) and shoot. Return to the camp (M1:4), where you will meet Dar Pha.

You will unlock [The Prophet].