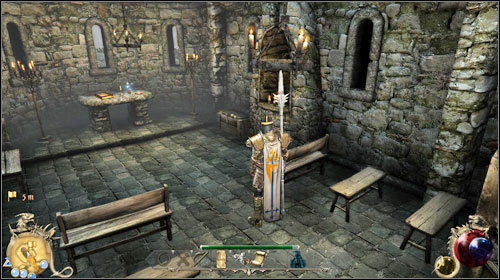 This mission is a continuation of choosing to listen to Nalia in [Witch Hunt].

During the talk you will learn about a mysterious scroll, with a powerful spell which will allow to protect the village even better. The Scroll can be found inside a chest in the temple (M37:3). Once you take it, Garadel will appear and ask you about the witch.

If you decide to stick to Nalia's version, in front of the temple you will meet Fionna, who'll inform you about Aidan's disappearance.

You will unlock [After Aidan].

You can admit to your mistake, return the scroll and go kill the witch.

You will unlock [The Witch].

After Aidan, Into The Catacombs, The Lost Hunter 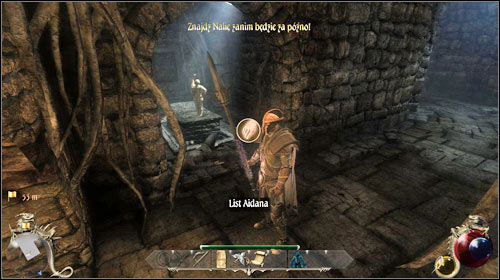 This mission is a continuation of choosing to listen to Nalia in [Witch Hunt] and refusing to help the priest in [Garadel's Scrolls].

While you were at the swamps and searching for spells for the witch, Aidan became worried and went out to look for you. Head to where he could have gone - the old cemetery (M37:12).

You will unlock [Into The Catacombs].

Open the crypt gate and head into the [The Catacombs]. Aidan can be found lying nearby the sarcophagus, dying (M38:1).

You will unlock [The Lost Hunter].

Don't waste time and run to Nalia (M37:8) to inform about Aidan's stare. Teleport with her back to the catacombs. Give the woman some time, leave the catacombs.

You will unlock [The Demon].