The Cursed Crypt, The Cemetery Creature, The Creature's Amulet 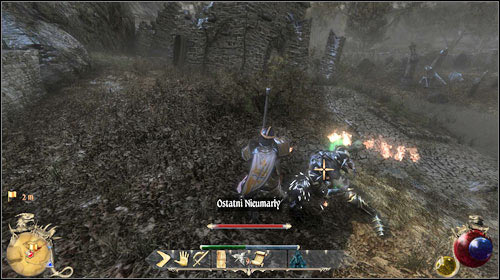 The missions are a continuation of the previous choice of having your own amulet and not talking with Aidan after saving the blacksmith.

This time you will have to walk quite a bit to the cursed crypt (M37:6). Look out for the lost spider cave (M37:7) and two Mammoth Spiders inside. After you get to the cemetery and approach the crypt, a cutscene will play and lightning will strike the spire.

You will unlock [The Cemetery Creature].

A monster - the Last Undead - will appear. He's a demanding enemy, resistant to fire and using poison (it's best to have an antidote nearby).

You will unlock [The Creature's Amulet].

Once the monster falls, search its body and take the strange amulet. Return to the priest (M37:3). 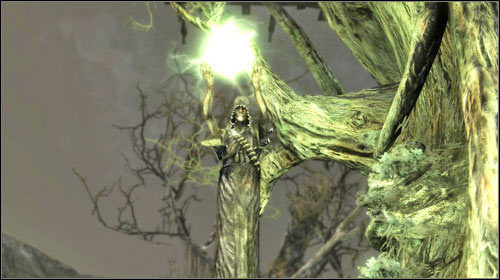 Garadel will fill you in on the Witch, who is supposed to be sending monster onto the village and perhaps her death will cancel the barrier surrounding the village. Willing to help, head out to meet the Witch (M37:8). You will be able to choose which of the two paths the plot should follow.

Hear out Nalia's story. The witch plot line is longer, but you will learn the whole truth.

You will unlock [The Old Spell].

Choose to get rid of the witch. A much shorter path.

You will unlock [The Witch].