The Priest and the Amulet

You have to bring the amulet to the priest. He will send you back to Aidan, who is in possession of one. You can gain the item in two ways, out of which the second one is Secret and much easier - the solution is showed on the map.

Complete the series of missions: [Aidan's Amulet], [Culainn the Blacksmith], [The Rescue], [Crow's Puddle], [The Sunken Spire], [The Cursed Crypt], [The Cemetery Creature], [The Creature's Amulet]. After obtaining the amulet, return to the priest (M37:3).

You will unlock [Witch Hunt].

Complete the series of missions: [Aidan's Amulet], [Culainn the Blacksmith], [The Rescue]. After rescuing the blacksmith, speak again with Aidan. Tell him that you're not sure if you're going to return the amulet, but you're doing whatever you can for the good of the village - he will give you the amulet. Return to the priest (M37:3).

You will unlock [Witch Hunt]. 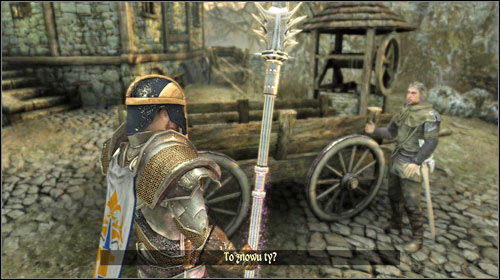 Aiadan (M37:2) won't be willing to give away the amulet, which is protecting him from the Witch. He'll tell you that you can obtain one by killing a monster which appears at the chapel after it gets hit by lightning. In order to call in lightning, you need a spire, which Aidan has given to the blacksmith.

You will unlock [Culainn the Blacksmith].

After completing the blacksmith missions and saving him ([Culainn the Blacksmith] and [The Rescue]) don't go for the spire but return to Aidan - talk with him once more about searching for the amulet and ask him once more. Tell him that you can't guarantee you will return the amulet, but you want the best for the village. The man will give you the item. You can return to the priest (M37:3).