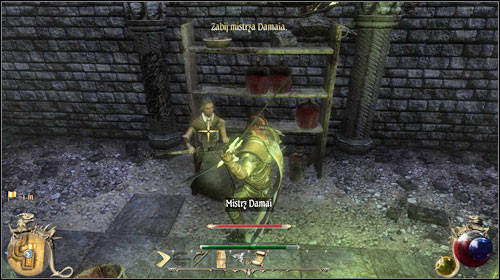 After arriving at the point of destination, Eric will be waiting at his laboratory (M26:1). In order to see, you have to first acquire a special item - the oculus. Master Damai is probably still making them. His hideout is in the southern part of gorge (M26:2). Go down to the basement [Astronomy Department Cellar], there are no surprises waiting for you there. Go meet the Master (M30:1). Whichever dialogue option you choose, you'll eventually have to kill Master Damai. The oculus can be found in the chest beside. Take it to Eric [The Swallows] (M26:1) - he'll perform eye surgery on you, thanks to which you will start to "see".

You will unlock [Shadows From Past]. 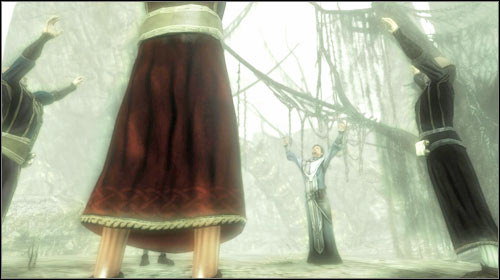 After the surgery, return to Professor Kaineth, who's residing at the casino [New Ashos] (M23:13). You'll be ready to learn about the past - head to the edge of the Gorge, where you will meet with Kaineth [The Swallows] (M26:11). Remember that the roads in the Gorge are filled with Vidons. After getting to the place, you will witness your first memory. Right afterwards, talk with the Master. The further part of the mission consists mainly of travelling to various places and seeing more fragments from your past. Your next destination are the ruins (M26:12). By going so far you will encounter various monsters, such as giant Ungodly Colossuses. In the next memory, you will witness Gandohar. Speak with Kaineth once more. 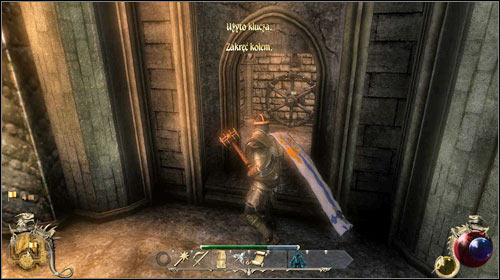 The next piece of the puzzle is an abandoned well below the old University (M26:13). You will meet more Vidons at the University as well. Picklock the cellar door [Clammy Cellar]. Inside you will have to face some Necrises, luckily there's not too many of them. Once you get to the well (M28:1), another memory will start. You have to lower the water to get to the lower level. Approach the wall (M28:2) and use the Cellar key on it. Right behind there's a valve - turn it to lower the water level. A few Necrises will appear below. After entering the main hall, another memory will be activated (M28:3). You can leave the cellar using the teleport (M28:4), which will move you back to the old University. Return to the ruins (M26:12) to witness another memory and afterwards talk with Kaineth.

You will unlock [Into the Swamp]. 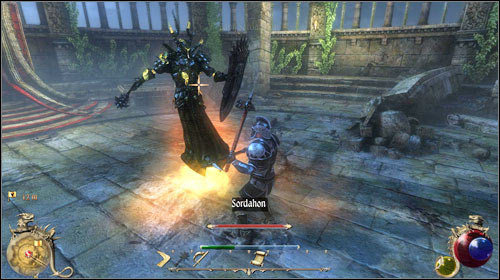 Time to return to the Prophet and tell her what you saw. Unfortunately the teleport at Ghortarius' quarters is inactive. Use the one at the orcs camp [Alsorna] (M1:4). After getting to Cassara's throne (M1:8) a cutscene will play - Sordahon will show up. The enemy is very demanding and resistant. Fortunately he won't be calling in any minions, so you'll have to fight only with him. Don't forget to search his body afterwards to collect his weapon and shield. Go to the underground [Alsorna - basement - Inside Alsorna] (M2:11), but you will only meet Dar Pha and Ghortarius. Head to the teleport at Ghortarius' chamber (M2:6) to teleport to the swamps (M37:1).

You will unlock [First Encounters].