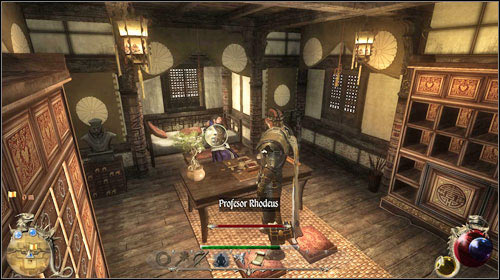 Professor Rhodeus can be found at the University as well, inside his office (M23:6). Head to the second wing, turn left in the corridor and open the door at the end.

You can listen to what professor Rhodeus has to say - you will learn that doctor Annaya is recruiting girls to agency called "The Black Rose" - head to the woman to verify this information. As you leave Rhodeus' office, you'll once more meet the stranger.

You will unlock [Doctor Or Madam?].

Tell the professor about your work "How I kicked Rhodeus from the University". Tell him to leave the University grounds, hit him (with fists, don't draw your sword) and he'll get scared and resign. Return to Dr Annaya's office and tell her the good news. Once you leave Rhodeus' office, you will once again meet the stranger. Unfortunately you won't learn too much. You'll get some auras and will be sent back to David.

You will unlock [David & The Doctor]. 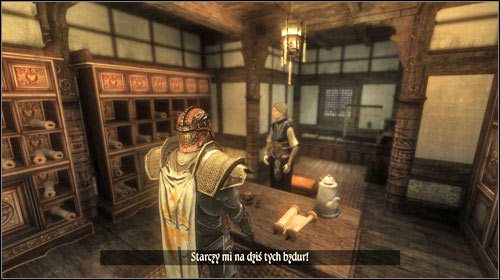 You will get this task only after listening to what Rhodeus has to say during [Professor Rhodeus].

Return to Dr Annaya's office and verify the information you have on the agency.

Listen to Dr Annaya. You will learn that there indeed is an agency, but not all that Rhodeus said is true - Angie can tell you more (M23:12).

You will unlock [Most Monstrous Mind].

Force Annaya to speak - you'll immediately be directed to Dr Lavarius, who might have information on the experiment from 20 years ago.

You will unlock [Dr Lavarius].