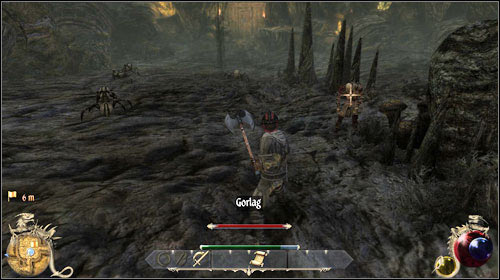 The soldiers sent to [Gorlag's Cave] haven't returned to this day. Your task is to head to the cave [Hatmandor Region] (M12:6). Once inside, go along the corridor to another large cave, where you will meet Gorlag (M13:1). Depending on the chosen dialogue line, there are two possible solutions.

You can kill the monster - both Gorlag and the ants will attack you. Your level and damage probably aren't too high, so the chances of winning are rather miserable. If however you do manage to kill them, take the Key from Gorlag and use it on the door, behind which you'll find the only soldier still alive (M13:2). Head to the exit (M13:3) and return to the Captain together with Harlef [Hatmandor Region] (M12:5).

You will unlock [Mages Guild Master].

You will lead to a conversation, after which you'll be asked to attain a stone, currently in possession of Scythe.

You have to complete [Old wounds].

Once you return with the stone, the monster will eventually die either way and you'll be able to safely free the soldier. Head to the exit (M13:3) and return to the Captain with Harlef [Hatmandor Region] (M12:5).

You will unlock [Mages Guild Master]. 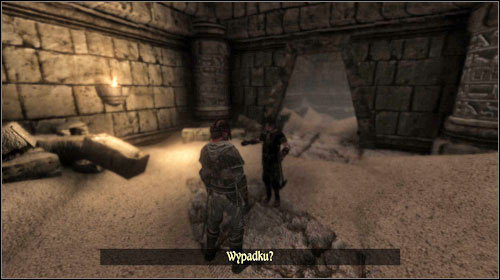 You will receive this mission after running an appropriate dialogue during [Gorlag's Curse].

Head to [Hatmandor Sewers], the entrance is at [Desert] (M20:17). Whereas your target -Scythe - is inside the sewers (M21:3). Right after descending, you will be attacked by a mummy. After arriving at the destination, you will have a short conversation with Scythe.

Carry out a calm conversation with Scythe. You will learn that the stone sought by Gorlag contains his stone. You will receive Gorlag's mortality - return to him [Gorlag's Cave] (M13:1) - the entrance is at [Hatmandor Region] (M12:6).

Throw an insult at Scythe and kill her. Search the body and take Gorlag's mortality - return to him [Gorlag's Cave] (M13:1) - the entrance is at [Hatmandor Region] (M12:6).

You will unlock [Desecrated Shrine].