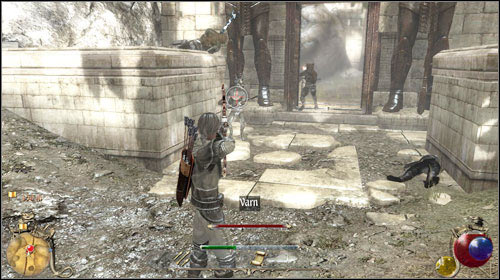 In order to get to Hatmandor, you have to complete the [Desertgate] quest.

NOTICE: You're not able to get through the gate while riding a horse.

After crossing the gate, you will eventually come across guards who will warn you of the Varns, controlling all the gates. After getting to the first one [Hatmandor Region] (M12:1) you will come across a group of guards fighting the Varns. Try not to attack any of the guards as they will stop being your allies then. After clearing the road the gate will open and a few more Varns will appear. You can choose from two paths in order to get to Hatmandor - the main route (with more fights with Varns) or the hills (nearby the [Lost head] quest (M12:2)). 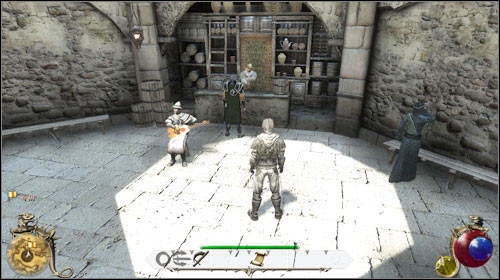 Eventually you will reach the Hatmandor gates [Desert] (M20:1). The guard will tell you to go to commander Valarin, residing at the inn in Cheznaddar (M20:2). In order to get to the city, you have to run a small errand for the commander - you have to meet an informant, who possesses information about the murderers. 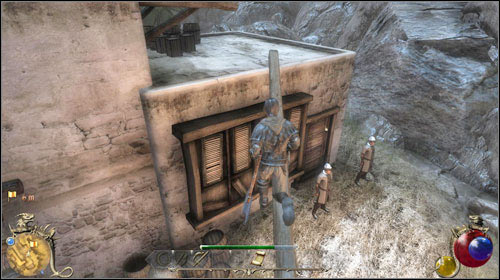 Head to meet Jarrad (M20:3). The man isn't willing to give any information - how him to speak, you have to firstly help him with getting medicine for his mother from the emperor's warehouse (M20:4). The warehouse protected by two guards, but can get inside through the roof - use the beams. You'll have to picklock the hatch. 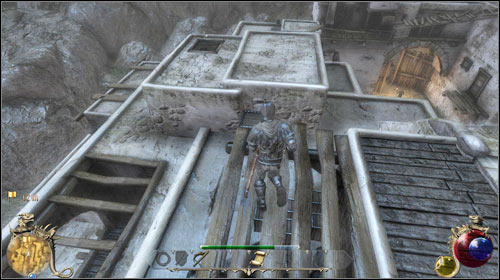 Once inside, search the chests for the Dew Bottle. Return to Jarrad (M20:3), getting out through the roof naturally. You will learn more about the murders. Head to Valarin (M20:1) and report to him. The gate to the city will be opened.

You will unlock [Inside Man].