HINT: In order to be allowed into the Enclawe, your reputation with the Necromancers must be at least 2/10.

A spark in the darkness

Xavo asks you to kill his mad brother, who is being held inside a cave to the West of the Enclave. Just go there and get rid of him. The necromancer himself is not a real threat, but watch out for golems who guard him.

This mission is simple as well - go to the map marker and defeat the weak monsters that lurk there. When you're back into the Enclave, you'll be allowed to talk to the Flame, necromancers' leader. 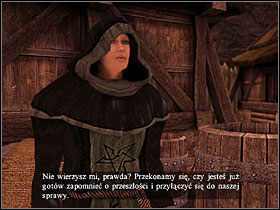 HINT: In our case the Flame didn't appear instantly after completing this quest. If you don't see her anywhere, perhaps you should travel somewhere and get back here. It might be a bug in 1.4.

The test of faith

Quest from: The Flame

The Flame has a serious task for you. You are to carry the taint-bomb (whatever) that she prepared to Four Stones, thus sealing its doom. Entering the village while carrying the package automatically completes the quest. Mind the fact that it actually kills all the people in the village, so better finish all the quests there before you do so. Also, remember that you can always kill the Flame as ordered by the Society (mission from Cathalon).