Hograd wants you to find a caravan that was lost somewhere along the way to Cathalon. You'll find it on the main road. Tell Hograd and he'll give you another task.

You have to destroy an orc encampment North of Windbreak. This quest is simple - just go there and kill every orc in sight. White head won't be among them, and therefore Hograd will have another mission for you.

Go to Windbreak and back to the tomb. White Head will grant you passage through the dungeon to the king's burial place. In there, you will find the Earth Stone (required for completing the main quest) and a false crown (required for "Satrius' crown" quest from Windbreak). 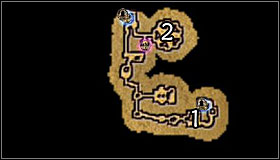 An ogre in the windmill

Taint in the graveyard

This time the Mayor wants you to clear the local graveyard from the undead. Just as before, you are given a map marker. It's a quick and easy task, for which you will be paid another 500 Gold.

The Mayor will give you a key to a royal tomb. Go to the map marker, enter the dungeon and collect both the Earth Stone and the false crown. It's good to do this quest together with "White Head".

Sigyor wants you to kill the bandits that took over the woodcutters' camp to the East of the village. He'll pay you 1000 Gold for doing that.

When you clear the woodcutters' camp of bandits, Sigyor will have another task for you. This time you are to eliminate insects that spawned East of the village. Before you leave Windbreak, talk to Master Oldrin and ask him about the monsters. He will tell you to bring him their egg.

I AM the real one!

This mission is explained in chapter "Four stones village".