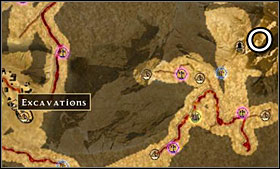 HINT: After you complete this quest, Ged apparently swears revenge on Ebrat Skelden. You are automatically given a mission to warn the man that he's in danger. Unfortunately, due to a bug (that's what we think it is, at least) the quest just completes itself after a few seconds and you don't have to do anything about it.

Rama Erendar is a mage who had his staff stolen by some Groms. You have to reach their encampment West of Covengor and retrieve the item. The right spot will be marked on your map.

Daron can be found near Rama Erendar. He won't talk to you unless your reputation with the Society is at least 2/10. The mission he gives you is to find a dragon scale. The best place to find one is the Brotherhood Outpost to the North. You can find it by one of the dragon skeletons there. When you give it back to Daron, you'll get some gold and reputation. 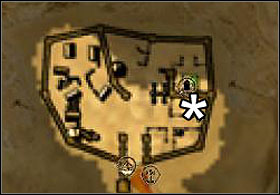 Find the scale where the star is.

Pol can be found in southern part of Tharbakin. Talk to him and he will tell you to pay a visit to local Merchant Guild HQ. It's right behind his back. You'll get a reputation point just for talking to him.

You reputation must be at least 1/10 in order for you to get this quest. Furvo wants you to take a certain package to Cathalon. When you reach the Capitol later on in the game, find the local guild HQ and give the package to Samon Veller.