Each hospital has its own individual properties. Not all types of diseases occur in every hospital. Usually a specific hospital has a specific specialization. It defines what kind of patients will appear most often. In the following chapter, you will find advice on how to start playing in individual hospitals.

Patients with psychiatric diseases dominate in Lower Bullocks. However, they are not the only patient types that will appear quite often. 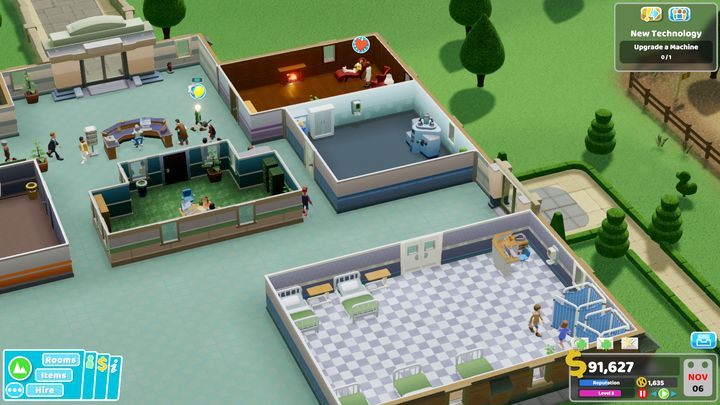 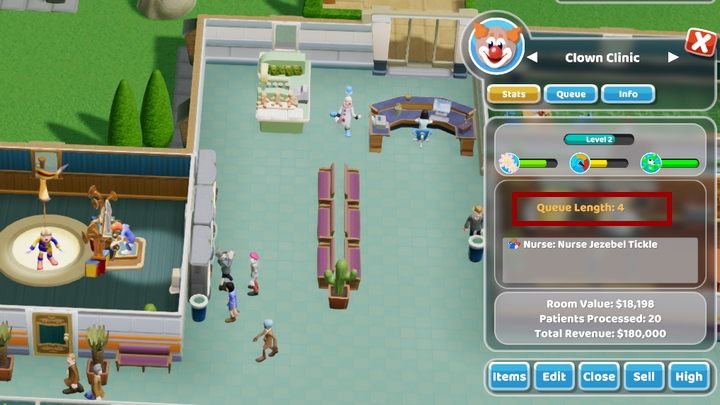 The queues to the clown clinic are long even if you have two rooms of this type.

This is the first hospital in the cold climate. You will unlock it after acquiring one start in Flottering. Additionally, compared to previous hospitals, you will not be able to hire experienced staff here. 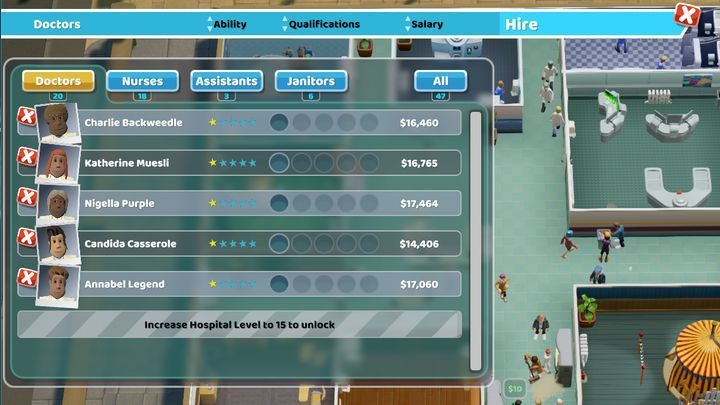 None of the candidates to work in Mitton have any experience.

A hospital unlocked in the same way as Mitton. This time, however, the specialization of your hospital will be different from the previous ones. You need to focus on developing the newly unlocked Fracture Ward. 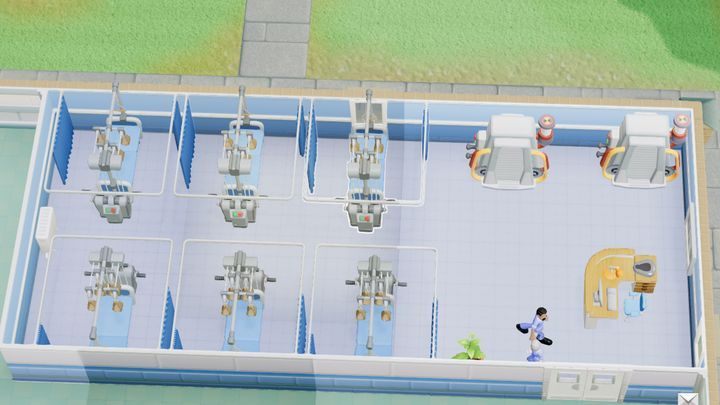 This is a hospital in which emphasis is placed on the appearance and, consequently, on marketing. You will unlock this hospital by acquiring one star in Mitton and Tumble.

In this hospital, once again, you will have to deal with a new method of healing. This time it will be surgery. You will unlock it after acquiring one star in Flemington. 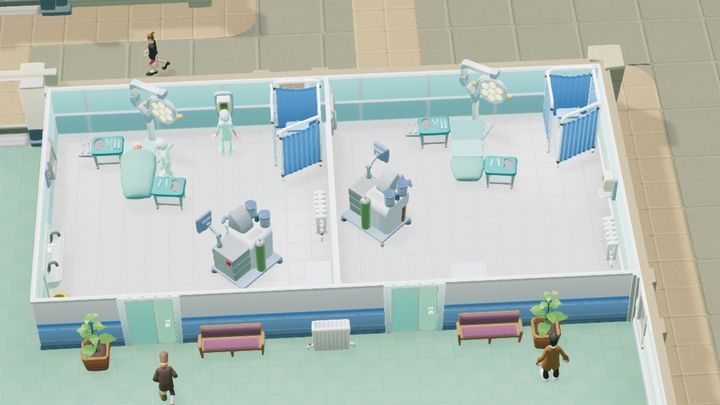 Surgery ward will be the Basic and most common rooms in Smogley.

This is quite a peculiar place. The hospital is located near a Power plant, in a complex of abandoned buildings. You will unlock it after acquiring one start in Flemington.

This is quite an unusual place. You must support the public health service here. That means that you will not be earning money for healing, but for completing missions assigned by the minister. You will unlock this hospital after acquiring one star in Smogley and Melt Downs. 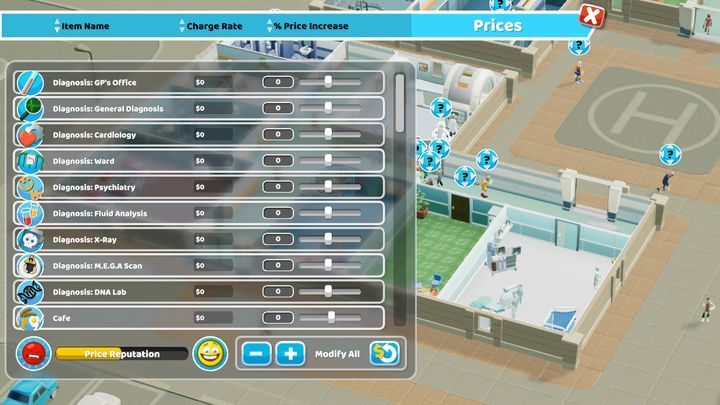 All of the prices are at 0 by default and you will not be able to change it.

This hospital is located in a tectonically active area, which means that you'll need to face various natural disasters rather often. You can unlock it by achieving 1 star in Duckworth-upon-Bilge.

This hospital is "famous" for various types of infectious diseases, which are common in this area. You'll have to deal with them somehow. You can unlock it by achieving 1 star in Duckworth-upon-Bilge.

Blighton, same as Grockle Bay, has a problem with infectious diseases.?You can unlock it by achieving 1 star in Sweaty Palms and Grockle Bay.

This run-down hospital is located in a low-income neighborhood. The hospital itself is in bad shape, and you'll need to turn the situation around. You can unlock it by achieving 1 star in Blighton 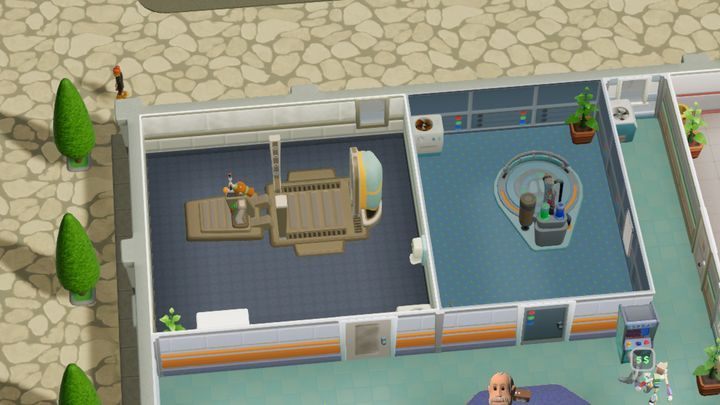 Rotting Hill will see you use rooms you may have already forgotten about.

Here's a hospital dedicated to cutting-edge technology. Which means, you'll need trained staff to operate it. You can unlock it by achieving 1 star in Blighton 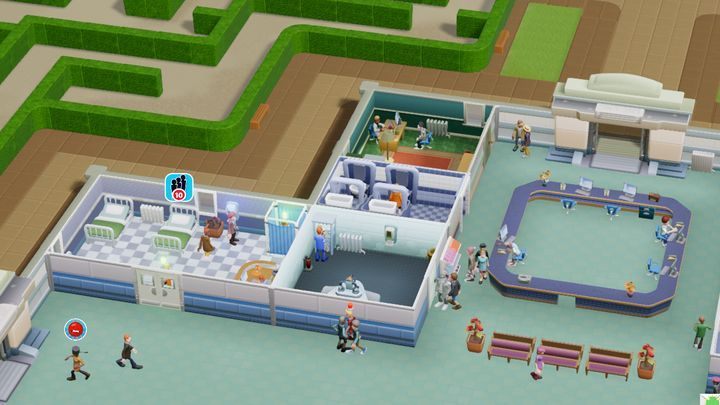 Croquembouche is more or less a sandbox scenario.

This is the last hospital you will have to deal with. Although it has the tasks required to earn a certain number of stars, it does not have any specific specialization. It acts as a kind of free game. All diseases are introduced gradually, in the order in which they appeared in the game. What you do with this hospital depends on you alone. The only thing you have to pay attention to are the queues in each rooms.

This site is not associated with and/or endorsed by the SEGA or Two Point Studios. All logos and images are copyrighted by their respective owners.