Well - it's not so bad after all - you've got the ship and you can leave this planet. But no - Turok that he is going to kill Kane. It is not going to be easy - the rest of his army is still here and they are dangerous as never. Do your job.

Plenty of soldiers are going to guard the hangar exit. Use the miniguns' ability to turn into a turret - it should help you.

Well - Kane is airborne, but when you use the nearby rocket launcher he should return down. 3-4 shots will do the job.

After a short talk - guys will start to fight. You just have to follow the instruction shown onscreen.

Your current task: Kill the T-Rex

And there is just one thing to do - kill the T-Rex. Unfortunately there are no easy hiding spots so you are going to have to run. The T-Rex is faster than you. But he's got one weak spot - problems with turning. But there are lot of boxes on the battleground you have to use. Now - if you put your side to a box and walk backwards, turning with the box when you reach the edge, you will find yourself easily able to keep the box between you and him. Meanwhile shoot at him using whatever you find. Don't worry about lack of signs he is wounded - after a good few minutes of shooting - he should die. Finish him with the knife. 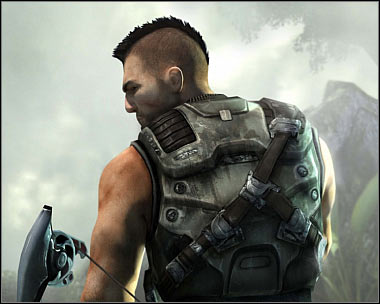 Congratulations! You have finished the single player campaign. After such a training you can try now to compete with the other players in the multiplayer. Have fun!

This site is not associated with and/or endorsed by the Disney Interactive Studios or Aspyr Media. All logos and images are copyrighted by their respective owners.