On this page of the Tunic guide, we will focus on the West Garden location. You will learn its key features, the most important places, connections with other locations and microlocation, as well as the opponents living there. 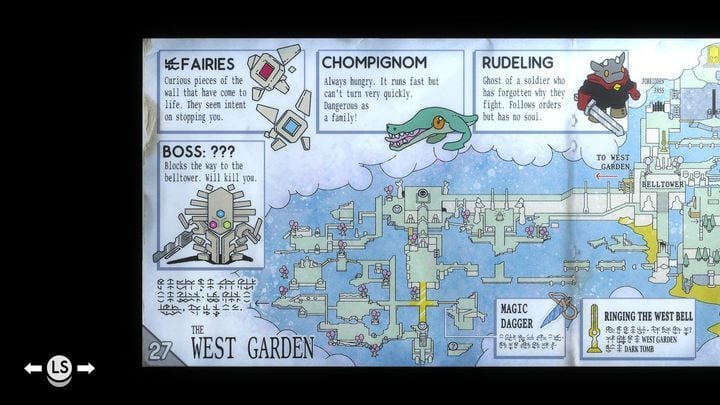 The West Garden (map above) is a place that can be accessed initially only through the Dark Tomb located behind the mill in the Overworld. This place is isolated from the rest of the main locations so you won't find any hidden catacombs or buildings here. The most important element of this location is the path to the West Belltower , in which you can ring the second bell that allows you to get to The Sealed Temple .

Fans of exploration will surely discover a lot of treasure chests here, and on the above map you also have the location of the magic dagger , i.e. magic weapons that are an interesting alternative to the wand. If you would like to visualize yourself its location a bit more, then pay attention to the screenshot below, showing a fraction of the path leading to the boss (the upper left screen is the arena with the boss). Follow the straight purple path all the way south. You should notice the entrance to a small crypt. This is where the dagger lies hidden. 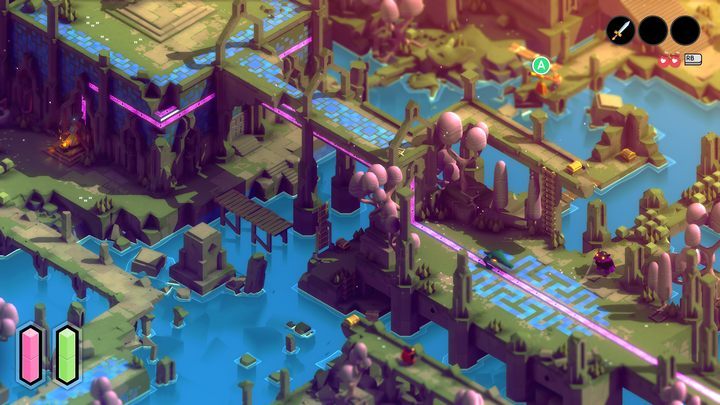 The West Garden is only seemingly a beautiful and carefree place, because it contains a multitude of opponents. The lakeside areas have become the natural habitat of the Chompignom, the surrounding temple ruins turn out to be the habitat of Fairies, and as usual, you will be troubled by large troops of Rudelings. There is also a boss in this location, the Garden Knight, which is blocking access to the Western Bell Tower.