On this page of the Tunic guide, you will find a list of all types of enemies that you can encounter on your way, along with a description of their attacks and tips on how to defeat each of them.

This page describes all opponents available in Tunic, except bosses. We describe the boss fights in the Bosses chapter. 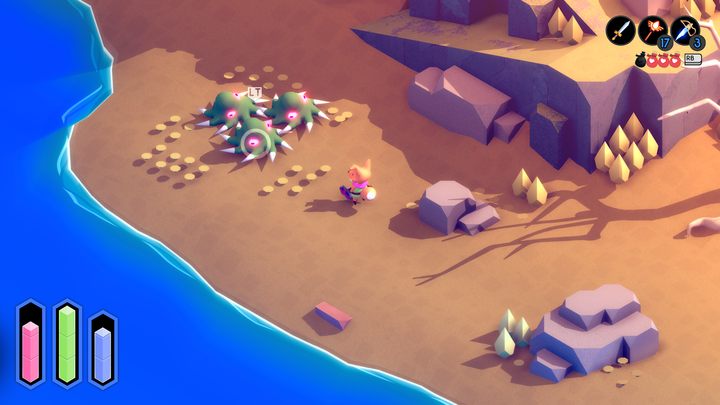 Spinning octopuses moving at high speeds and attacking with their limbs. Just before dying, they explode in a small area, damaging everyone around them. Their smaller variants, without tentacles and resembling slime, can only jump. They are very vulnerable to damage - you can get rid of them with a combination of quick attacks. Don't forget to move away from the octopuses before they die. 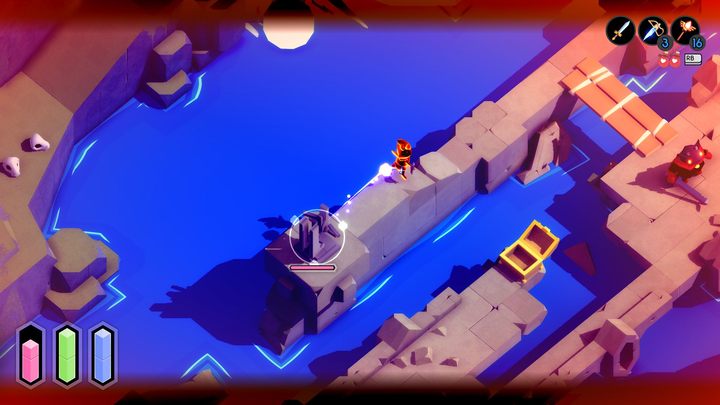 It's kind of a turret that activates as soon as you approach it. Its only attack is a burst of shells, but you can block it with a shield. It is best to destroy the Autobolt from a distance. 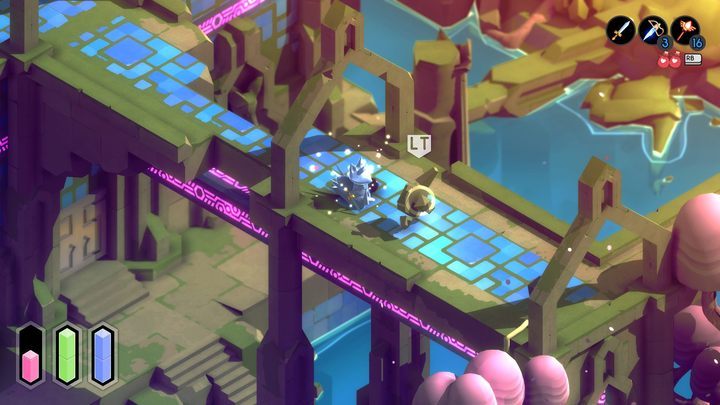 Tiny flying magical creatures that fire a single missile from time to time. There are two types of these opponents in the game - one can freeze you, and the other can deal damage. It is best to eliminate the fairies at a distance. They usually appear in groups. 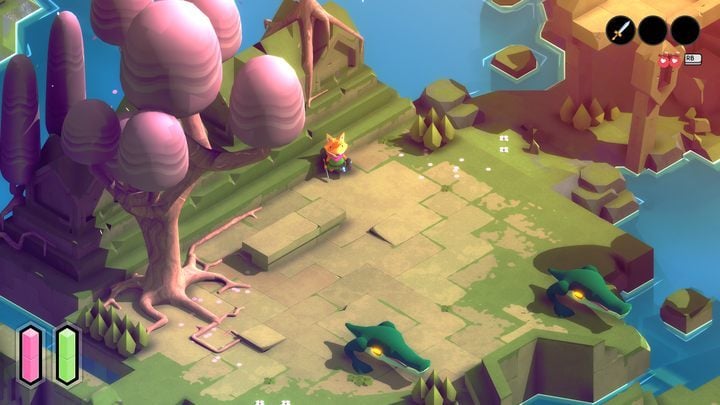 A two-legged crocodile that attacks with its teeth. It deals a lot of damage, but the bite is signaled, so it is easy to avoid it. Just watch its mouth. Attack him with one or a maximum of two attacks, and then get ready to block or a roll. 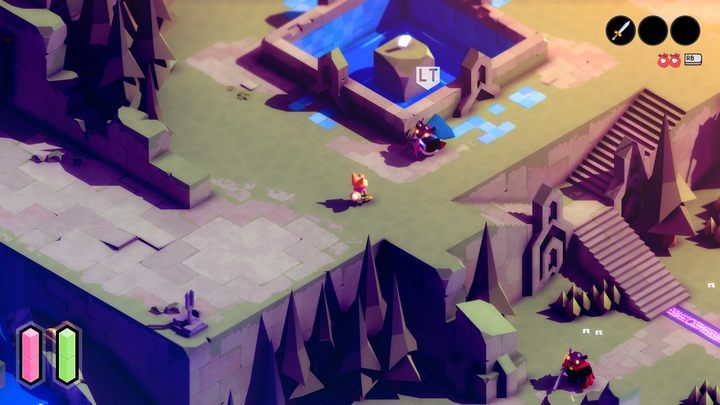 Something like a knight cloaked in darkness. You can encounter him in several different variants - with a sword, sword and shield, and a slightly stronger version with a special attack in the form of a charge. He's a fairly predictable opponent, but don't underestimate him. Attack with short combos, and don't forget to block from time to time (dodge attacks of the more powerful knights). 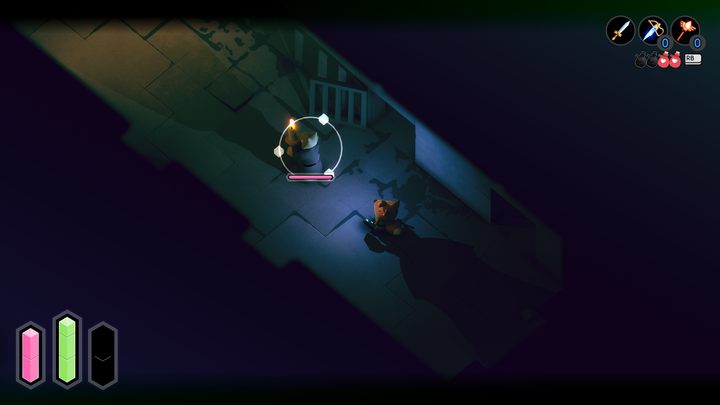 Occultists that you can find mostly in groups. The standard version of these enemies has a candle that can set the fox on fire. On your way, you will also meet guardian mages with the area of effect spell. The only way to avoid it is to roll outside the area of effect. Try to approach the mages as quickly as possible and spam them with attacks before they teleport to another place. 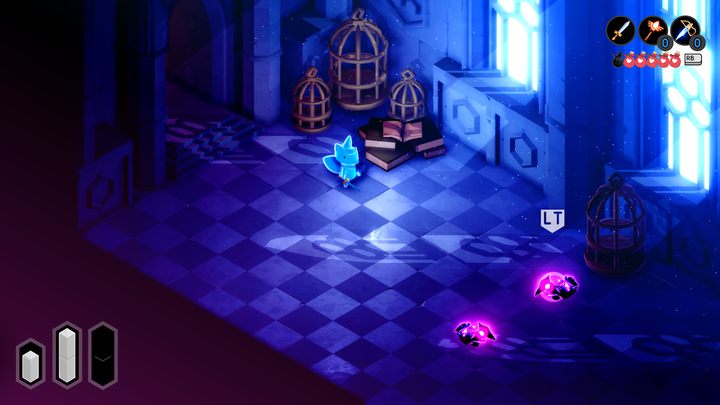 One of the most annoying opponents in the game. If he sees you, he won't let you go even one step, constantly charging toward the fox, and then he'll move away to a safe distance and prepare the attack again. The only easy way to fight a Husher is to shoot him with ranged weapons. If you want to kill him with a melee weapon, you have to stand in front of a wall and hope that he will run into it. Then you will manage to attack him a few times. However, we strongly recommend sneaking past this enemy - in most cases, it is totally possible. 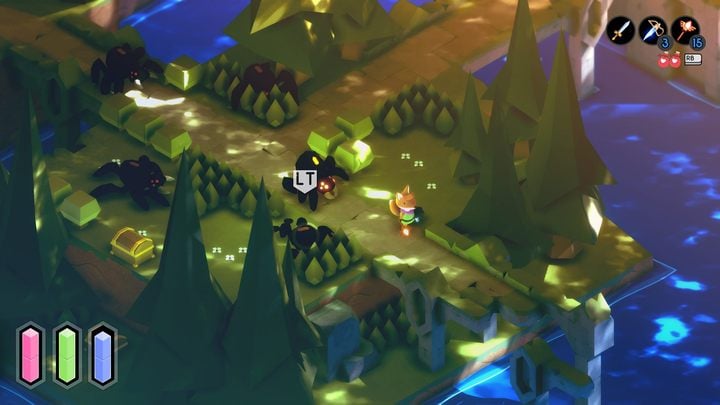 Type of spiders that almost always move in groups. They are deadly dangerous at the beginning of the game, dealing very high damage and having high speed. If you encounter them, running away is not an option - you have to defend yourself. For this, a shield and large amounts of firecrackers will be useful. It's best to aim several spiders at once when using the explosives. 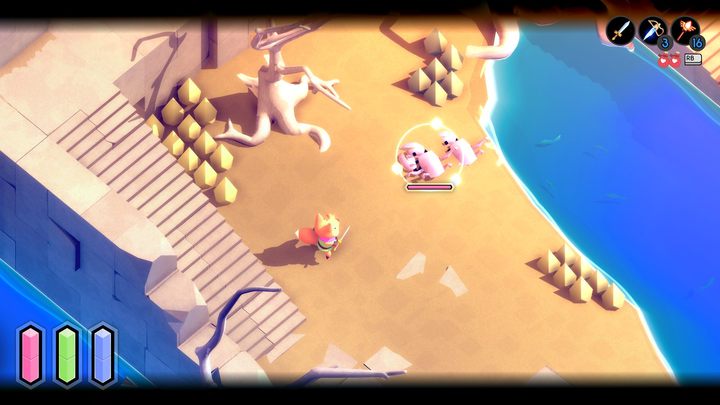 Relatively harmless shellfish that follow the fox as soon as they spot it. You can defeat a smaller one with one attack combo but be more careful with the giant ones. Attack them right between the claws, but as soon as you see they're going to squeeze them in a moment, roll backward. 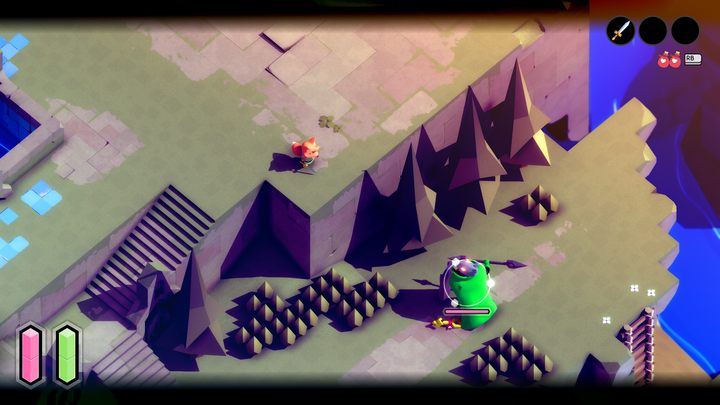 A mighty enemy wielding a great shield and a spear. Fighting him at a close distance doesn't make much sense because it is difficult to break through his guard, and getting around him is not the easiest thing to do. He also easily blocks the ranged attacks. We strongly suggest avoiding this enemy. However, if you still want to get some crystals for defeating him, try to freeze him with a Magic Dagger and then attack a few times. Various bombs are also an effective weapon against him - he will not run away from them as he is a static opponent. 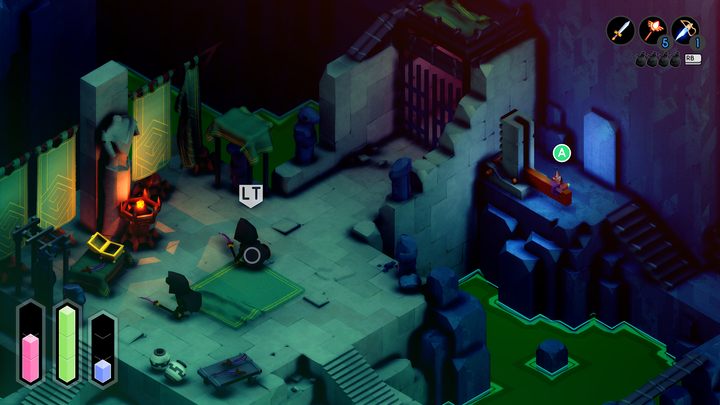 Hooded and deadly amphibians residing mainly in a hidden cave. Most of them have two blades, perform a series of quick attacks, and then jump back. Some can also pull you to themselves with their long tongue. You will also encounter frogs with a spear and a shield. Each such fight must be a well-thought-out and patient exchange of blows. Otherwise, you'll end up badly injured. 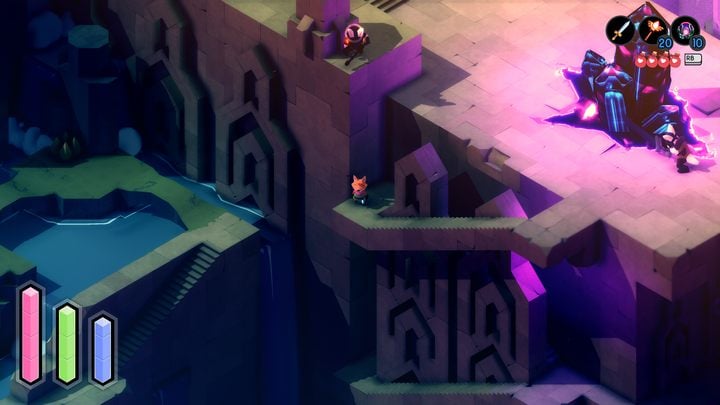 Masked opponents, with three types of weapons at their disposal, can be found in The Quarry. Some of them wield a large two-handed sword that can kill with even two blows (you need to parry them), others use a sniper rifle (avoid the shots with rolls and approach the shooters as soon as possible), and the third throw bombs (it is best to finish them off at a distance). 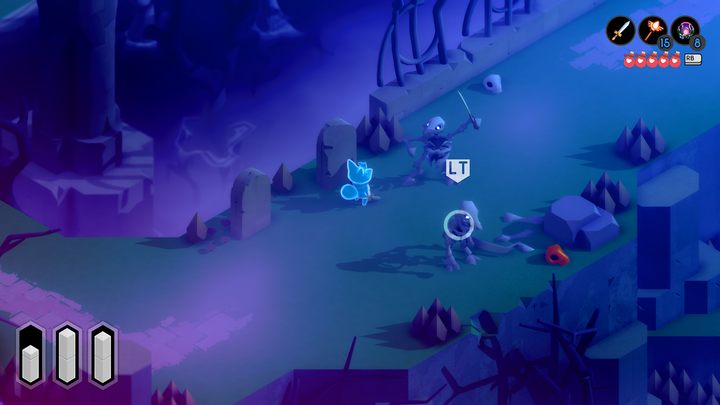 Relatively easy to defeat opponents - in fact, a slightly improved version of Rudeling. Single attacks, dodges, and blocks will do the job here - but watch out for giant skeletons, as they can kill with one hit and have a lot of health points. 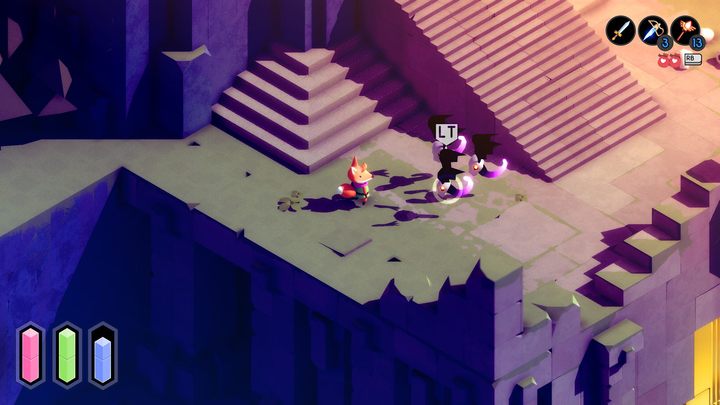 Flying, tiny creatures appearing in groups that you can eliminate with a series of short attacks. Their attacks are easy to dodge but don't get hit because they deal damage over time. 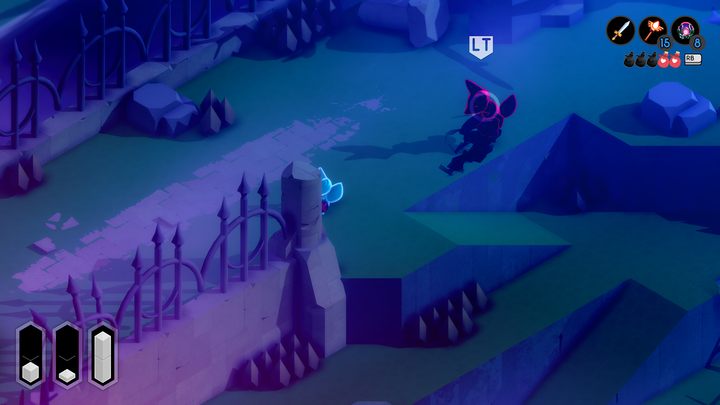 An invisible type of enemy, revealed only when attacking, which is essentially a charge. You can locate this opponent following traces he leaves on the map. If you see traces on the water surface or moving bushes, you know where to find the opponent. Besides, always attack the place where it was last visible. There's a good chance it's still standing there. 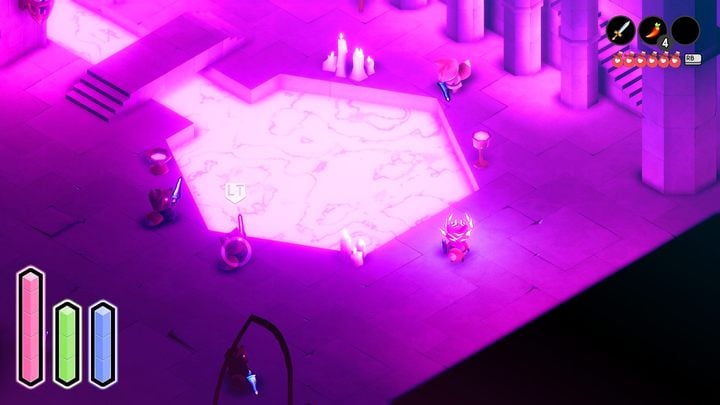 An enemy with the same set of basic moves as the main character in the game. He can use a sword, roll, and the damage he deals is really powerful. There are slightly simpler versions of this enemy - they move much slower, and their attacks are weaker. 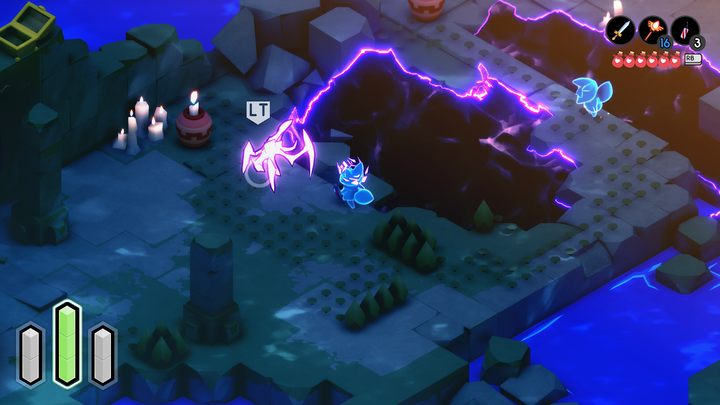 White-pink glowing monsters with biting attacks and moving at high speed. They often appear in groups but try to take them down one by one. After killing one of them, two more appear (with less power and fewer health points), and after killing the next two, you have to fight with a total of four. One of the most demanding opponents in the game, use ranged spells and don't stop moving - don't get surrounded.

Golden Knights from the Great Library (no in-game name) 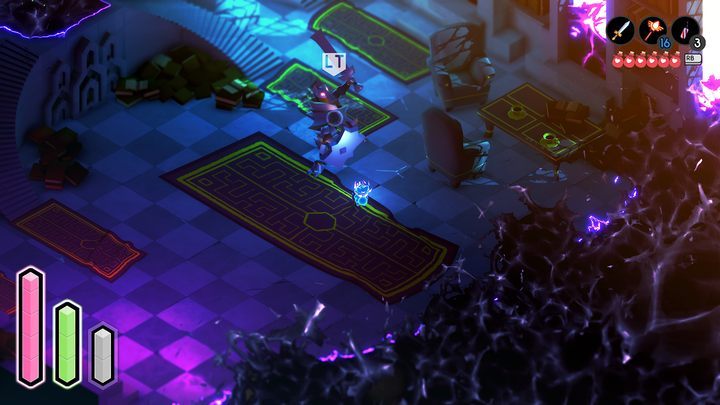 Knights duo with a lot of health. Their attacks are quite slow, so it's easy to dodge them but don't use more than two attacks in one combination. Fighting with them requires patience and consistency. 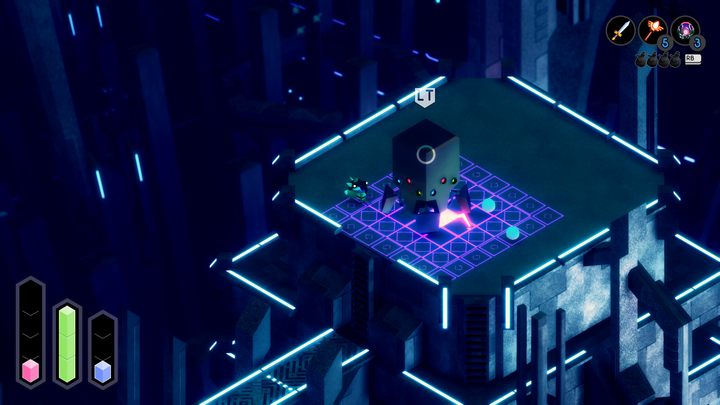 Probably the most powerful types of enemies in the game, except bosses. They have two forms and use a series of AoE attacks that require perfect reflex to avoid. Robots also have the most health points out of all standard opponents. The shield is unlikely to be of any use here - use bombs and spells as often as you can instead.