For every building you have to pay in cash. Some of them are expensive, some are cheap, but this doesn't mean that you can place a building and never think about it again.

A lot of buildings require certain conditions to work properly. Farms and Ranches require a fertile ground, Mines require deposits and Logging Camps - trees. When mineral deposits are expired, the building will be destroyed automatically and you will have to look for another source. Only Farms do not cause degradation of the ground.

Most buildings require trained personnel. If you can't provide enough employees, you should consider if it is worth placing the building now.

Some structures are available from the beginning. Some have to be invented or appear after stepping into another era.

You should build unique buildings, such as Space Program or Lighthouse. They provide bonuses that upgrade your country.

A vast majority of buildings has some kind of upgrades - special attachments that provide new options or increase the quality and other statistics of a building. Some of them can change the production chain entirely, or completely modify the building. 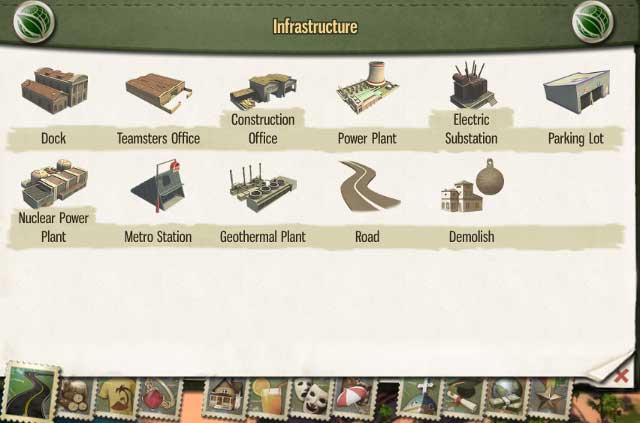 Buildings from this category are necessary for the country to exist and prosper.

Docks, Construction Offices, Teamsters Offices and Roads are available from the beginning. Every new dock provides with an additional trade ship to your fleet. The game doesn't let you demolish Construction Offices or Docks, if there is only one of each kind on your island.

Electricity is available in the World Wars era. First, you gain a simple Power Plant, supplied by coal, which you should replace with gas during the Cold War era. It will then provide more energy. Nuclear Power Plant is very efficient, but it requires uranium to work and what's more, there can be only one on the island. In Modern Times, Geothermal Power Plant is available, which doesn't require any resources, but provides little energy compared to Nuclear Power Plant.

Parking Lots and Metro Stations are useful for faster travelling. You should build them in places where there are a lot of buildings and near factories with low number of workers. 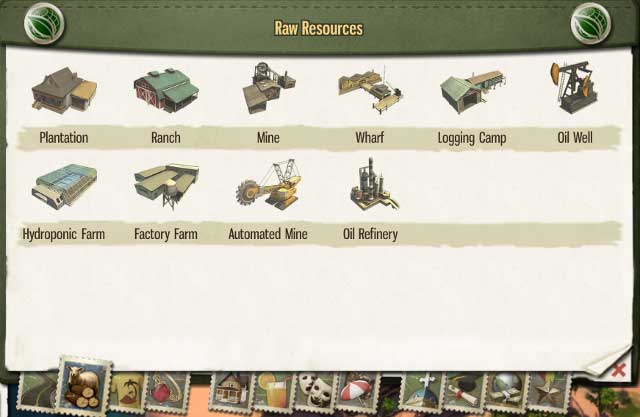 Here you will find Plantations, Ranches, Mines and other buildings that provide raw resources.

Most of them will give you different goods depending on where you place them or what option you choose (you can try to grow all kinds of plants on a farm; whether they grow or not - that's a different story). Some of these buildings are better version of older structures, such as Automated Mine or Factory Farm. The older ones may be upgraded to the new form.

Farms do not degrade the ground on which they are built, but they require a large territory. If you fail to provide at least 80% of the territory required, the effectiveness will suffer.

Ranches cause gradual worsening of the ground on which they are built. A lot of them in one place will lead to a fast degradation of the ground's quality. Minimal safe distance is 15-20 fields. This building is cheap, so placing it somewhere else shouldn't be a problem. Besides, the ground regenerates itself when it is not used by a Ranch.

Mine, Logging Camp and Oil Well exploit resources from or near deposits. You can upgrade them, so that they will last longer or discover new sources. You can also use Edicts for that, but only once. 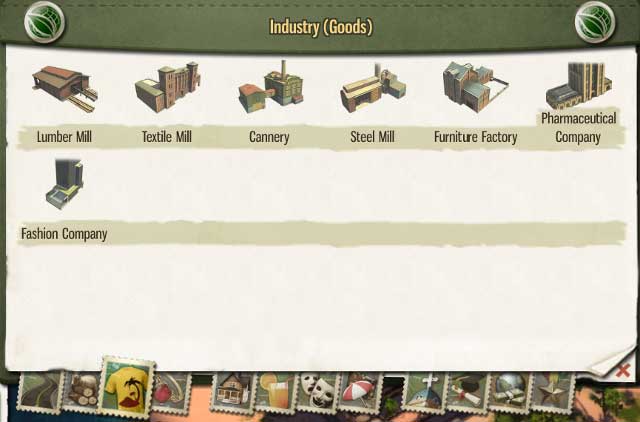 These buildings (except for Lumber Mill) are available only from the World Wars era.

To produce goods, they require particular resources, so you will have to make sure that they are available. It is worth the trouble, because the products are much more expensive in export than their substrata.

Every building, again besides Lumber Mill, requires employees with secondary education at least. Hiring people from abroad is very expensive, so you should build at least two High Schools on the island.

Production chains are shown on a Diagram enclosed to the guide.

In this category, which is a rather artificial one, you will find more industry buildings. They however produce luxury goods, such as cigars, rum or cars.

Just as in the previous category, they have to be provided with an adequate amount of resources and also trained personnel. Sometimes even with higher education. They may also require a combination of resources.

Goods that they produce are even more valuable in export. 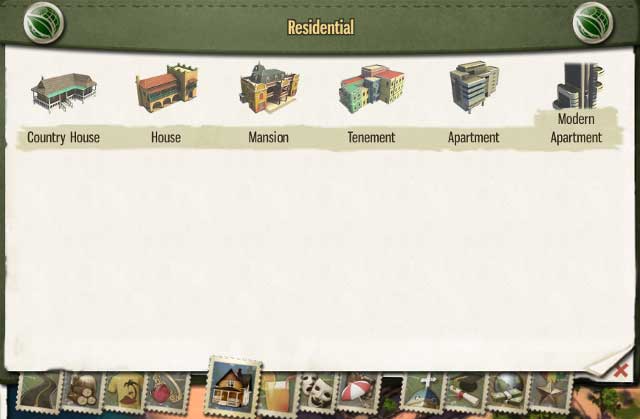 Residential buildings differ throughout the eras.

At the beginning, you can only build Country Houses and Mansions. Mansions are too expensive and nobody is going to live in them until you have enough rich people on your island.

During the next era, you will be able to build Houses and Tenements. It is not advisable to build the latter as the standard of living in them gradually lowers as the time passes. Country Houses can be upgraded into Houses.

Cold War will bring Apartments, which are the best choice to build. All Tenements can be now upgraded to this standard. Later, there will be an option to upgrade those buildings into Modern Apartments, which however will entail the necessity of connecting them to electricity. 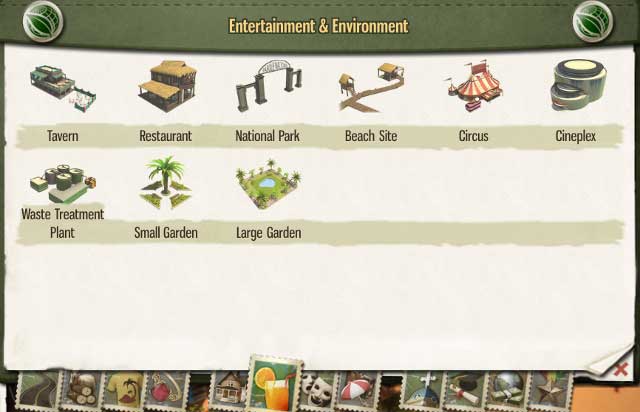 Tavern should be built very early - this will increase the level of Entertainment at the first stage of the game. More buildings will appear as you advance to different eras.

Basically all of them bring profit - it is good to employ a manager who can increase them in those buildings that earn you the most.

Place Gardens only there, where you cannot build anything else. They increase the level of beauty in the vicinity. Profitability of buildings like Taverns or tourist resorts depends on this factor.

Waste Treatment Plant will allow you to reduce the level of pollution to about a half of the starting amount. It is good also to issue a proper Edict, about waste sorting, which will reduce the pollution in residential areas. 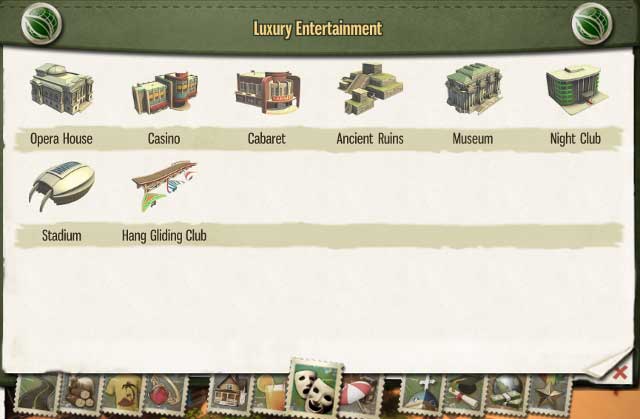 Most of the buildings of this category appears only during the Cold War era and require electricity.

One or two such places will considerably increase the level of entertainment, but they also have a big potential of attracting tourists - in these terms, they are a gold mine. 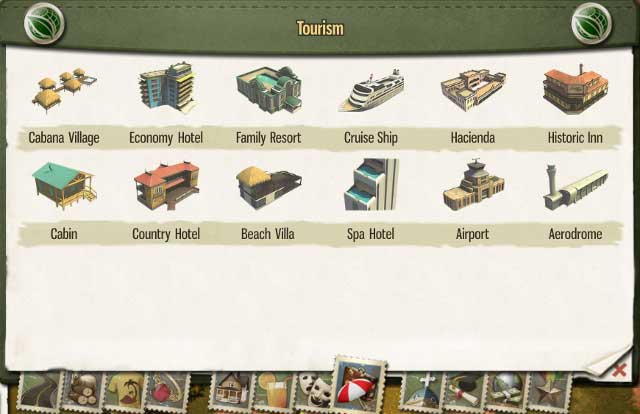 Tourism buildings appear in the Cold War era. However, Wealthy Tourists won't start coming to the island until Modern Times.

There's little point in building small lodgings - you should aim for the bigger ones right from the start.

Airports will noticeably increase the inflow of tourists. To be fair, Wealthy Tourists arrive at the island only in this manner. They also increase the Tourism Interest value. 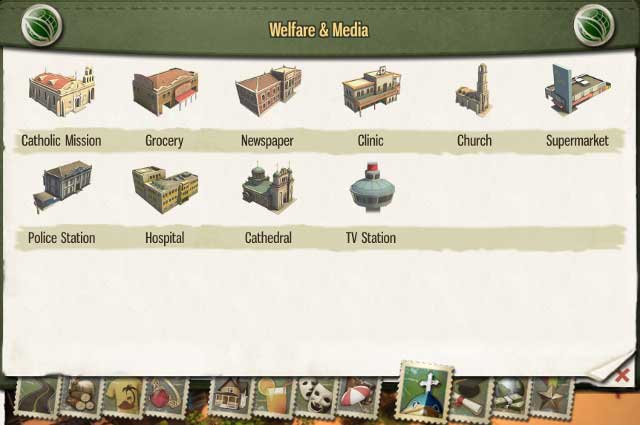 This category provides buildings that support the need of your citizens.

Catholic Missions, Churches and Cathedrals satisfy the need for religion and, after upgrading, increase the amount of people living in their vicinity. Grocery and Supermarket allow people to buy food, whereas Clinics and Hospitals provide healthcare. You should upgrade them so that more patients could be treated.

Police Stations, after upgrading, can serve as fire stations, which are necessary during volcano eruptions.

Newspaper and TV Station (where is radio?) will satisfy the need for freedom, despite the propaganda. 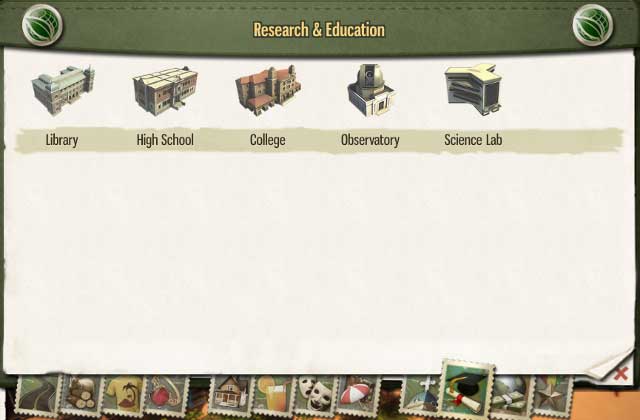 Two buildings from this category (High School and College) provide education for the citizens. Thanks to that, you can employ them in factories and other buildings that require such people.

The rest of them generate research points, which allow you to advance to next eras and to invent new laws, edicts and buildings.

College, after upgrading, will generate a lot of research points. 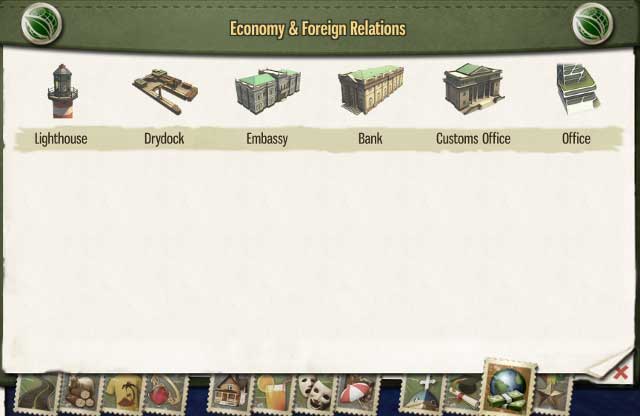 Embassy allows you to strengthen the relations with neighbouring countries and Bank increases your account balance and allows you to open a Swiss Bank Account.

The most curious building is Office - it makes money based on the number of citizens living nearby, which basically means, from nothing... 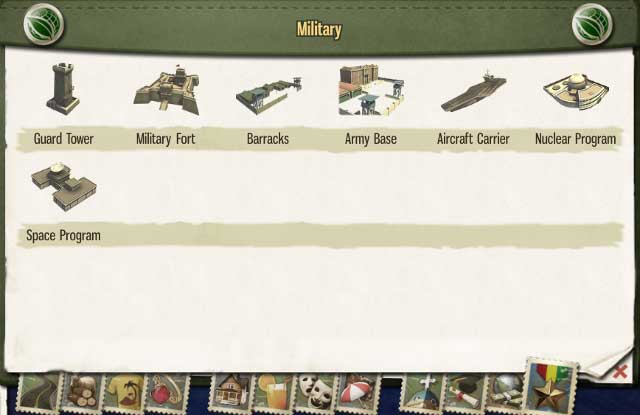 Buildings from this category will help you to hold your position, when all the diplomatic and economic measures fail.

Two of them are special buildings - you can only have one of each type and one of them is required to step into Modern Times.

It is good to have several Barracks and Army Bases spread across the city. Rebels come from various spots and sometimes the army won't make it on time to save the attacked building.

This site is not associated with and/or endorsed by the Kalypso Media or Haemimont Games. All logos and images are copyrighted by their respective owners.