This page of the guide to Trek to Yomi contains a walkthrough of Chapter One. Our walkthrough explains, among others, how to complete training in the dojo as young Hiroki (the prologue of the campaign), where to find Master Sanjuro, how to reach the main gate, how to deal with the first bandits, and what to do during the first confrontation with the Kagerou boss.

Prologue - training in the dojo 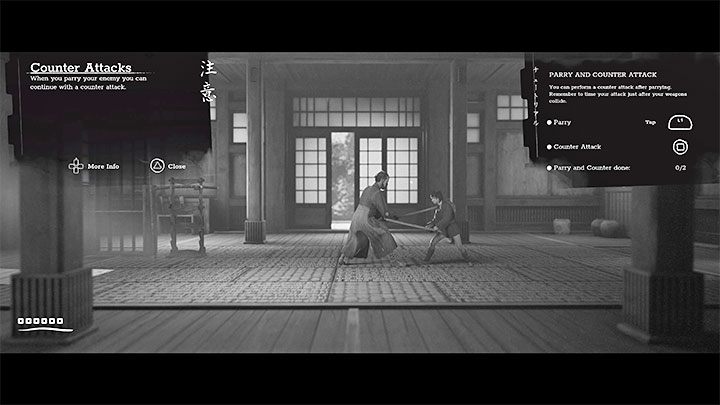 You play the entire Chapter 1 as a young Hiroki (main character). In the beginning, you will be trained in the dojo under the supervision of Master Sanjuro. This is an introduction to basic moves and attacks (you will unlock new and more complex versions of them throughout the game). The list of lessons to complete includes: 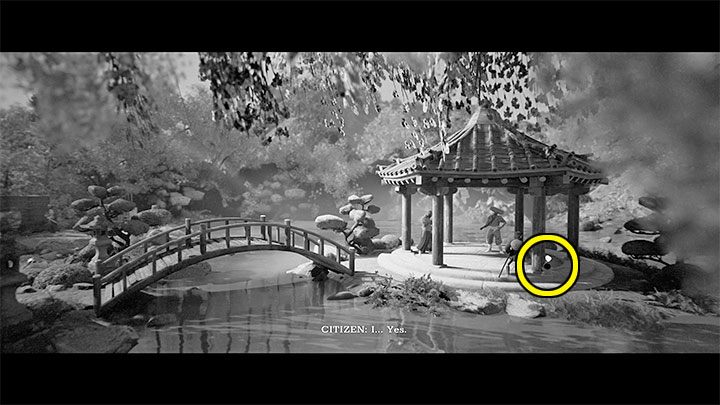 After watching the cutscene, use the back exit of the dojo. This will allow you to explore the garden behind this building, which is optional.

You can practice performing attacks on the dummy. Additionally, after using the small bridge on the right, you will find the first artifact - Tamaya Mirror - shown in the picture. These items are one of the collectible types in the game. 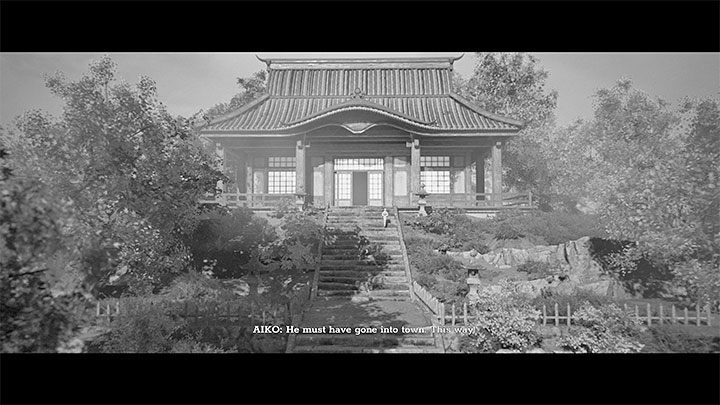 Go back to the dojo, use the main exit of the building (or you can go around it if necessary), and use the wide stairs leading towards the village.

While traversing the village, you won't encounter any enemies at first, but you can and should look around a lot. Remember to approach all characters and items with small interaction icons. 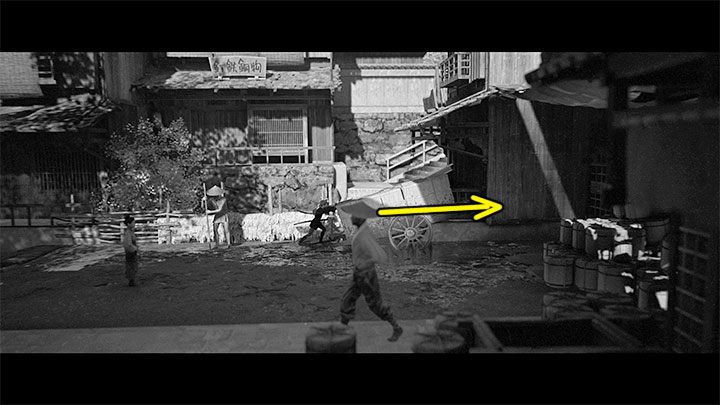 Follow the main read of the village. After reaching the location shown in the picture, you will come across a blocked passage. Approach the car that you have to push to the right. You will unlock the stairs in the background. 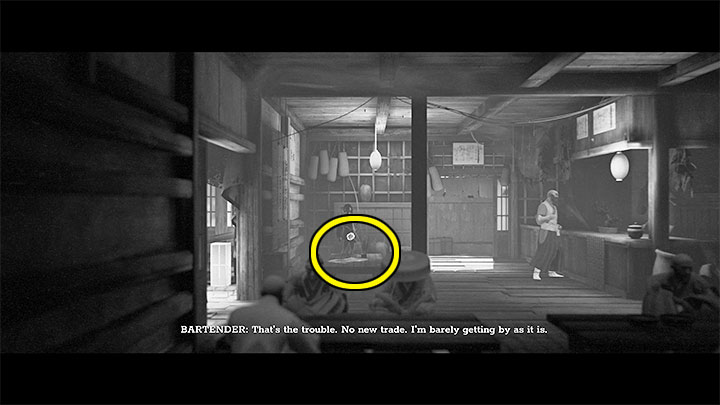 Enter the building on the left. On the left table, you can find the second artifact - Izanagi Print, marked in the picture.

Take the left exit from the room and go left. You will learn about a shortcut from Aiko. Reach the entrance to the next building. 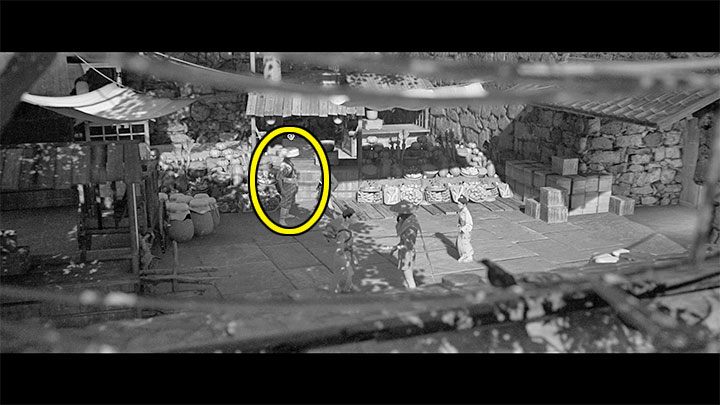 Start exploring the building on the first floor. Go down the stairs and go left first. Talk to the Merchant marked in the picture above. You will receive an artifact from - Kai-Awase Shell him for free. 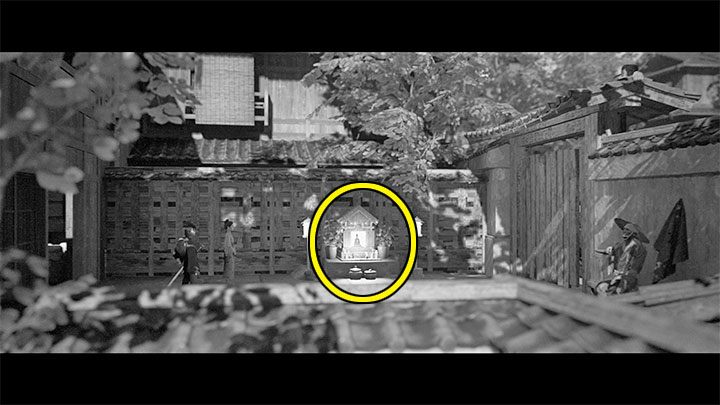 Go back to the building with the stairs, and this time go right. After leaving the building, you will come across the first shrine marked the picture.

Objects of this type are primarily used to save the game (you can only interact with each shrine once). Later in the campaign, they will also be useful for restoring health in case you lose it during fights with opponents. 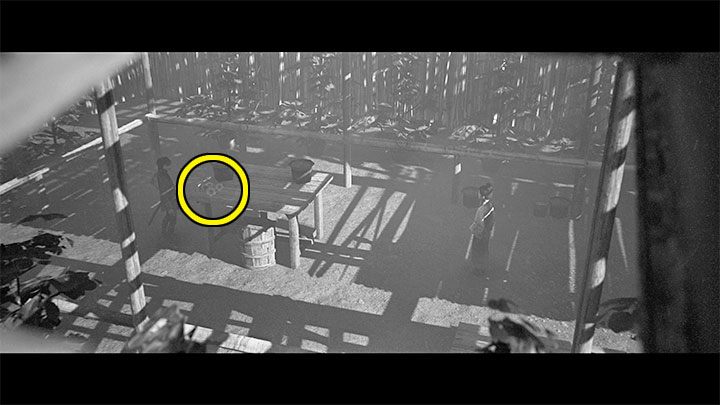 Keep going right. The path will be very linear for a while. After entering the large wooden building resembling a greenhouse, explore the area on the left. On the table shown in the picture above, you can find an artifact - Sakura Bloom. Now you can go right for a change.

After reaching the area with escaping villagers, go deeper into the plane. You will watch a cutscene of a bandits' attack. 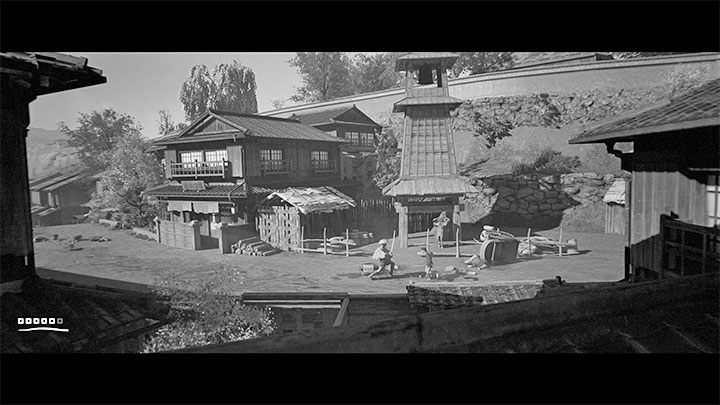 Head towards the exit, and you will find a shrine by the new path. From now on, you will travel alone.

The first fight with a bandit is ahead of you. In this first confrontation, you can try to parry and counterattack. If you are not confident enough, use a regular block and wait for the opportunity to perform a series of light attacks. 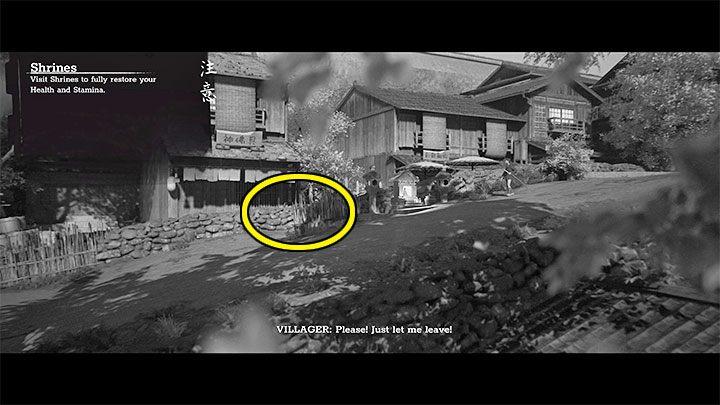 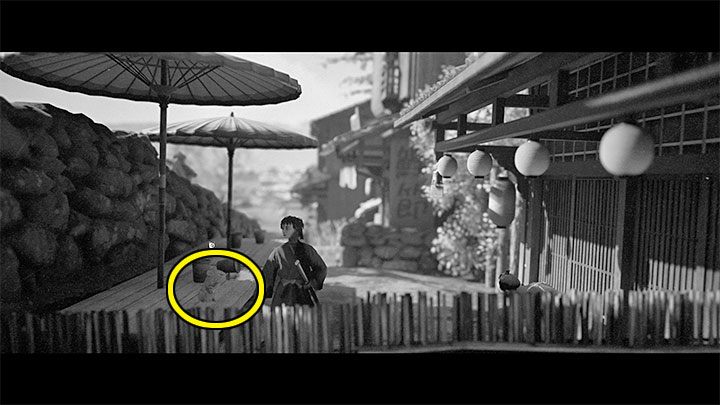 You have to go left - expect more fights with bandits. After defeating your first enemies, you will reach a new shrine. Don't forget to save the game and regain any lost health points.

There is a secret area marked in picture 1 on the left of the shrine. Explore it and after the new screen loads, locate the artifact - Field Mouse Sculpture from picture 2. 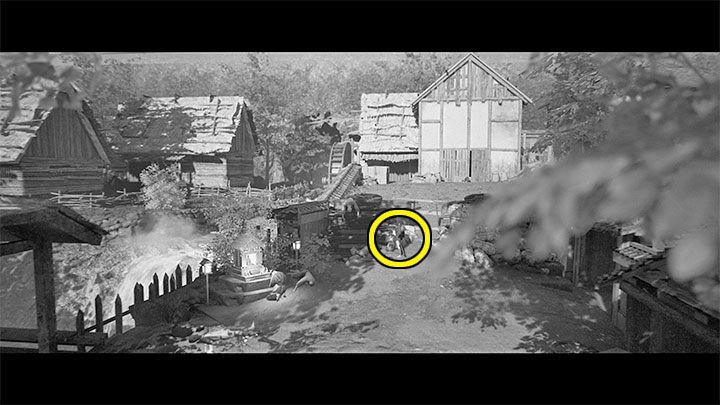 Return to the main path and head left. Expect new fights with bandits. Always try to attack them one by one.

In the next area, go to the bottom of the plane. In the place marked in the picture, you will find the first health upgrade, which permanently extends your health bar. You can also interact with the new shrine. 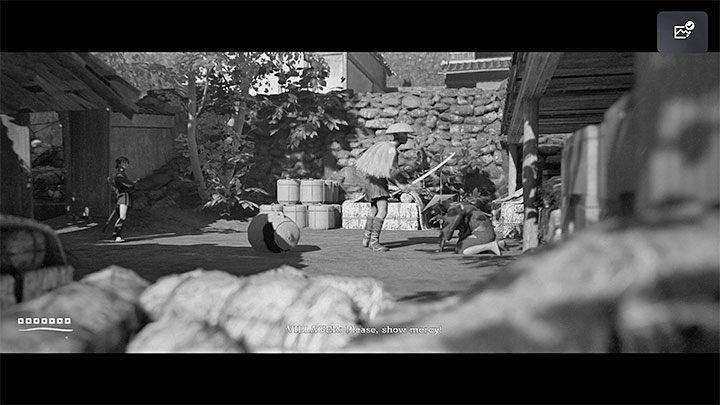 To the right of the newly found shrine, there is an optional area where you can save the villager from one of the bandits. You can talk to the rescued person.

To continue the journey, choose the path to the left of the shrine. 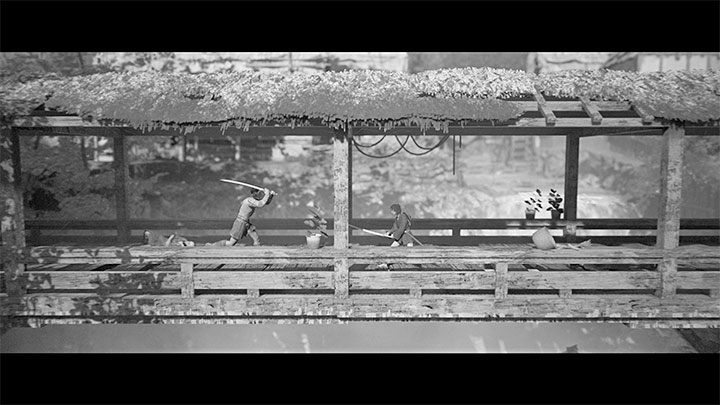 A new bandit to eliminate will appear on the bridge. Defeat him (and he shouldn't be too much of a challenge), and you will unlock a new skill. In this particular case, it should be a Rotation Attack, which will be useful in all fights with enemies placed on both sides of the screen.

Go further to the left to reach the next shrine. 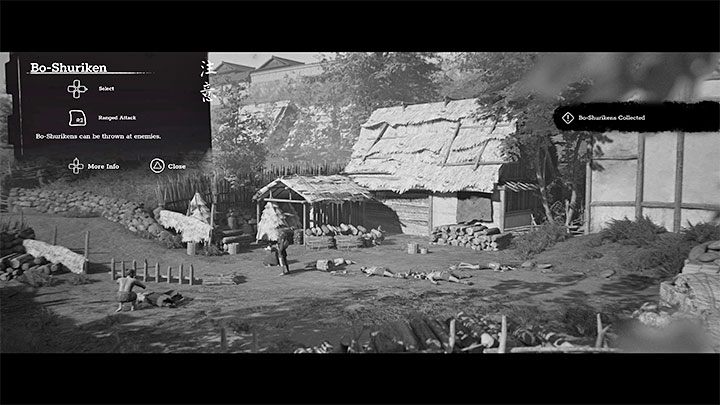 In the area on the left of the shrine, one of the bandits is terrorizing a civilian. Deal with the opponent and talk to the villager.

You will unlock Bo-Shurikens, which are used in the game to perform ranged attacks. Hitting an opponent with a shuriken, in most cases, will not kill the enemy, but it can throw him off balance and, for example, stop his current attack. Each Bo-Shuriken is a consumable item, but you will find more from time to time while exploring new locations. 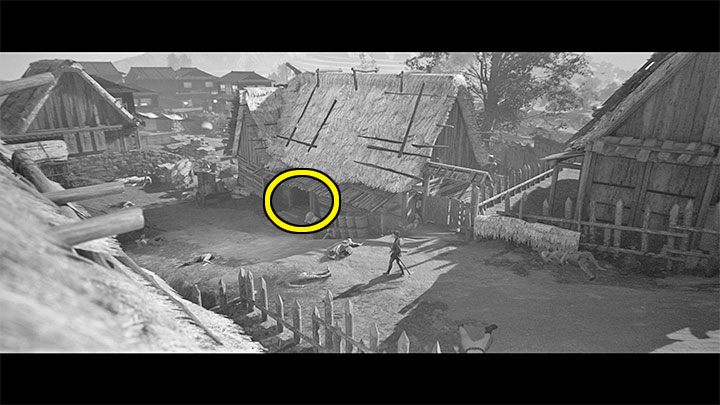 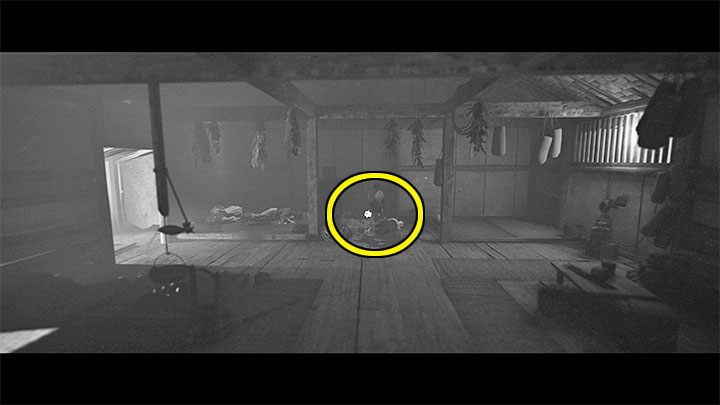 Keep going left. You can test Bo-Shurikens on another group of bandits. The path will lead you to a shrine near vast fields.

After entering the new village, start by examining the hut marked in picture 1. Inside the hut, you will find a new artifact - Kakute (picture 2). 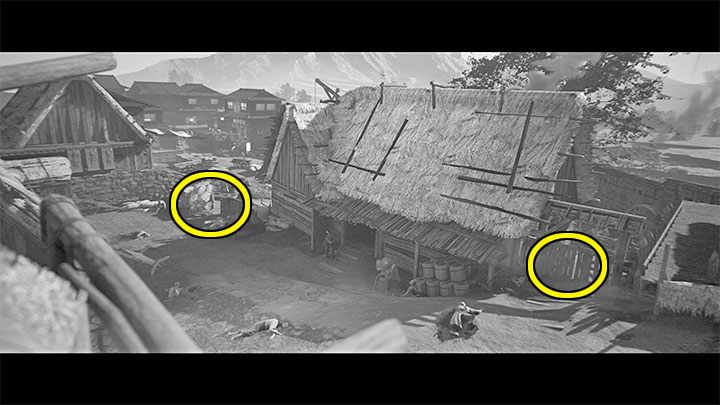 Go back outside. Now, you can choose the path to the next location - we have marked both in the picture above: 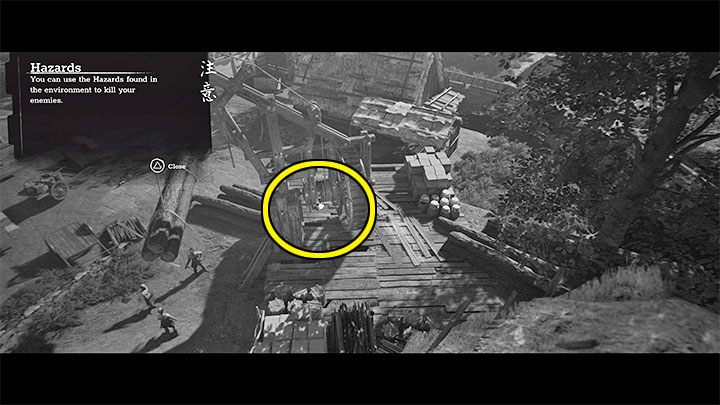 If you have chosen the path (according to our recommendation), you will reach the crane shown in the picture above. You can interact with it and make it drop a heavy load on the enemies under the crane. Thanks to this, you will get rid of them without any direct fight.

Regardless of the option you choose, go left, where you will find a shrine next to the villagers defending one of the gates. 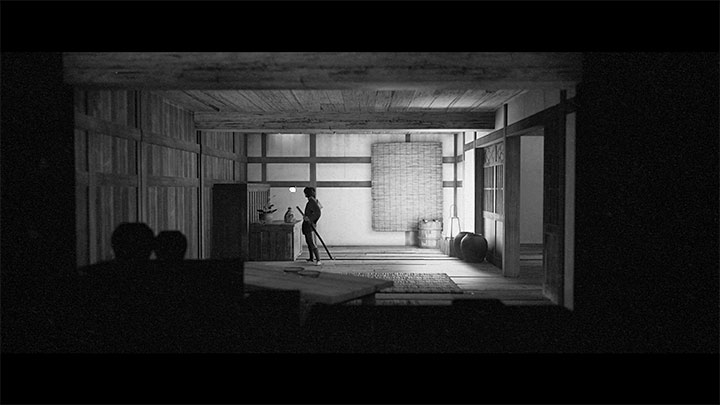 Keep moving to the left and be ready for the next fight. You will enter a new building, and the game will let you know that there is a secret area nearby.

Examine the room on the left on the ground floor (picture above). You will find the first Stamina Upgrade there. These upgrades permanently extend the stamina bar - they will allow you to perform more attacks before the hero get tired. 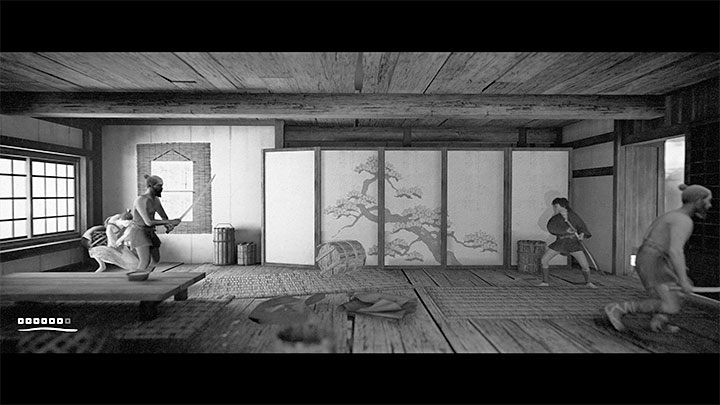 Go back to the previous room and use the stairsto the first floor. Turn left to reach a new shrine.

To the left of the shrine, there is an optional room with bandits (the picture above). You can deal with them and talk to the woman. The reward will be Bo-Shuriken Upgrade. It will allow you to carry more shurikens in your inventory. 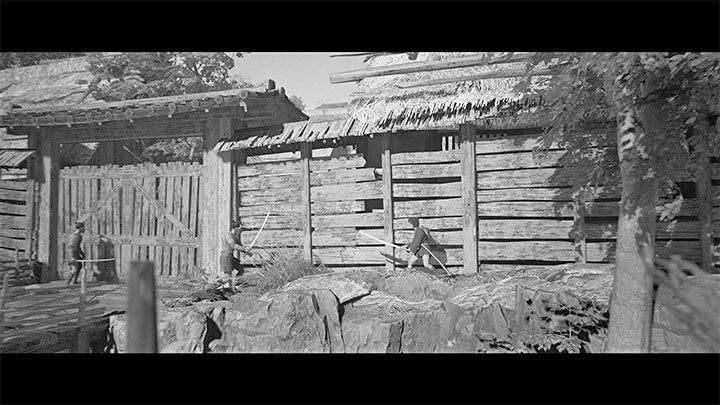 Go deeper into the plane next to the recently discovered shrine to continue the journey. Now you have to go right, and you will meet more bandits on your way.

After the fights, reach the end of the path. Jump down and move along the walls on the left. You will encounter a new group of bandits to defeat. 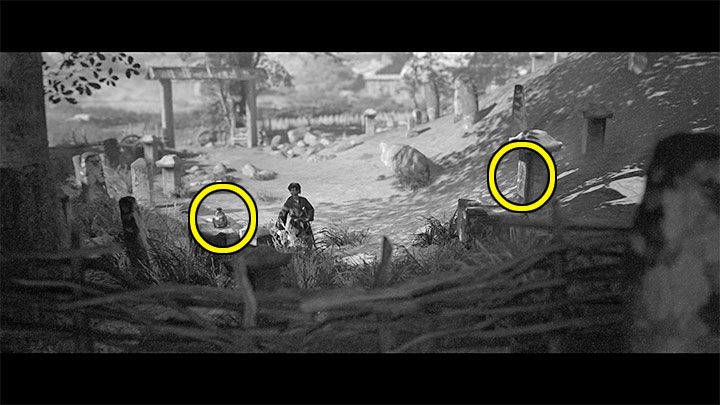 Take the path leading towards the vast area surrounding the village. After you reach the fork in the road, take the path on the right first.

You will find a shrine and a cemetery there. At the very end of the cemetery, there are 2 secrets we have marked in the picture above. These are a Stamina Upgrade and the artifact - Izanami Print. 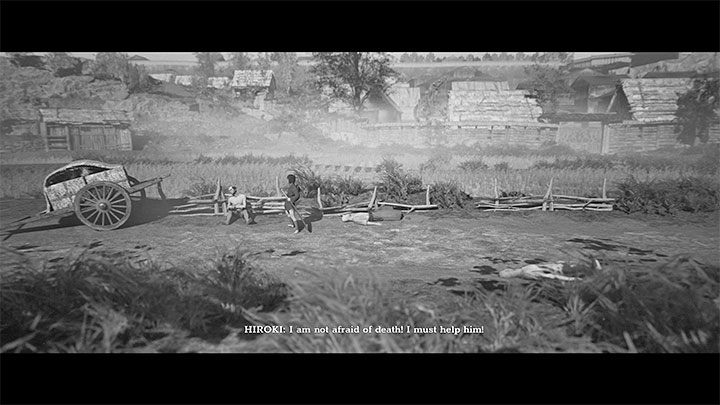 Go back to the fork and take the left path for a change. On the way, you can talk to one of the villagers from whom you will receive Bo-Shurikens. A little further, there is a new shrine. Go further left, and a cutscene will display.

The first encounter with Kagerou is ahead of you, but it's not a full-fledged confrontation with the boss because you will not be able to defeat your opponent. The fight with him will be very short. 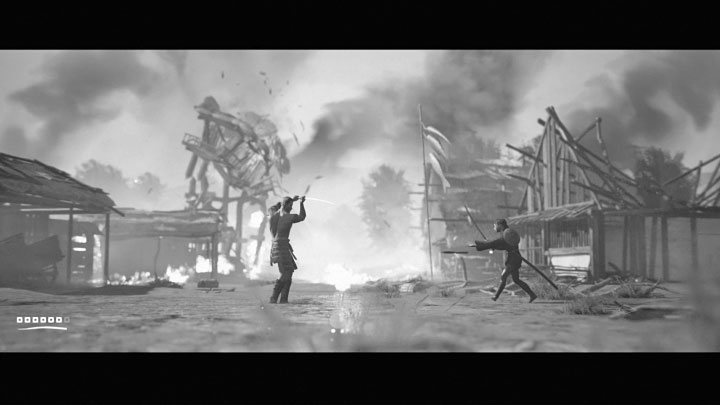 You can use shurikens to attack Kagerou, although they don't deal very much damage. 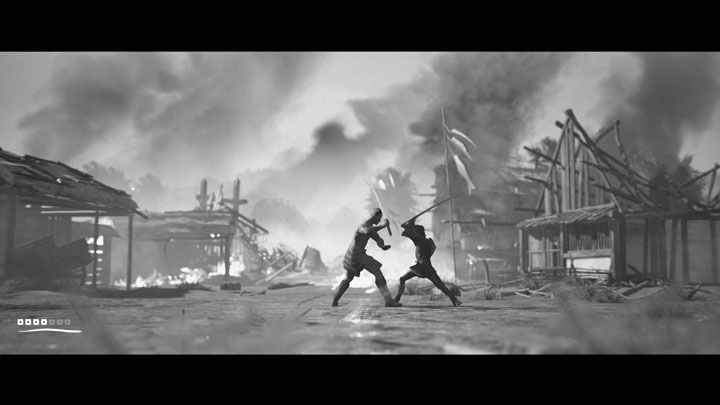 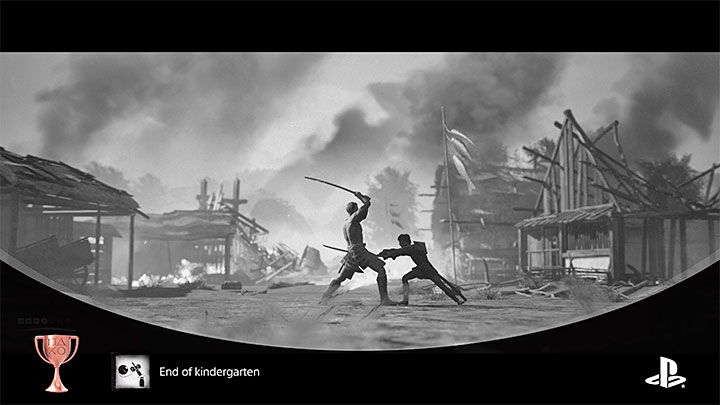 Kagerou performs a series of 3 katana swings. Try to parry one of these attacks so that you can launch a counterattack.

As already mentioned, the fight against Kagerou will end ahead of time. The game will display a cutscene that ends the first chapter.