Everyone is looking for a way to get stronger. One of them are Suppressors, unlocked at a very early stage of the game. On this page, you will learn everything about Suppressors, from how to upgrade them, to the rewards you get for upgrading these devices. 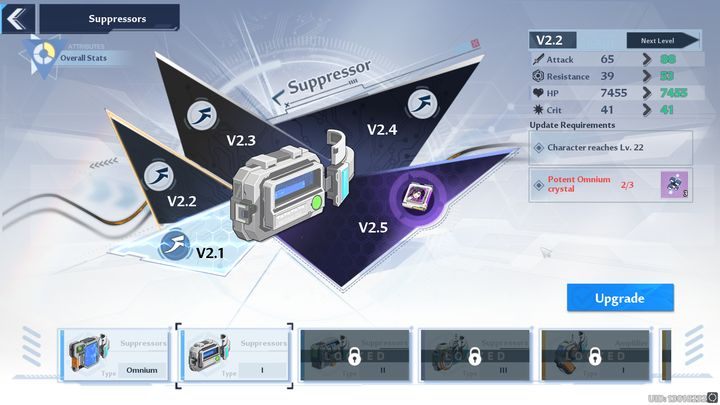 Suppressor is a device that, according to the plot, maintains your life energy. It is also very important for the player, as it is responsible for statistics such as Attack, Resistance, HP or Critical Damage. Each upgrade will boost these stats slightly.

To level up a Suppressor, you will need to have the appropriate amount of Potent Omnium crystals. You can get this crystal in many ways: 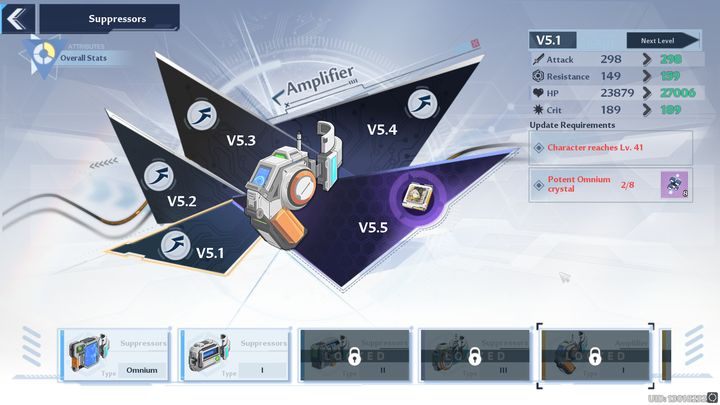 With each upgrade, you'll get a stat boost, as well as Matrices of higher rarity , which are special chips that can be socketed on the given weapon to further increase its damage dealing potential.

With version 5.1, your Suppressor will turn into an Amplifier. Thanks to it, the stat boost is even higher, and you will also receive SSR Matrices.

If you are unable to upgrade the Suppressor or Amplifier, it is probably because you do not have enough Potent Omnium crystals, or your main level is too low. Pay attention to the right side of the screen for Update Requirements.

It is worth noting that you will only get access to further regions if you have a high Suppressor level. This is another reason to unlock better versions of these devices.