This page of the guide to Total War Warhammer 3 describes the general rules of the Realm of Chaos.

Sooner or later, all players who want to complete the campaign in Total War Warhammer 3, will enter the Realm of Chaos in search of the souls of the daemon princes, because only they can open the way to the Forge of Souls and thus to victory.

Realm of Chaos: How to unlock? 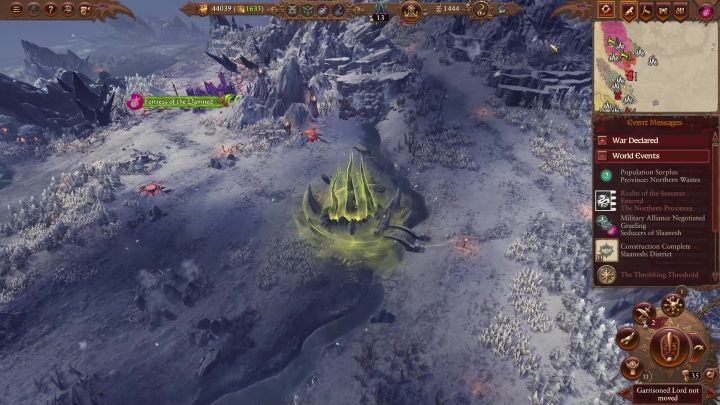 To get to the Realm of Chaos, you have to interact with the Rift. These portals appear for the first time around the 30th turn, and then return regularly. Though there are different types of Rifts, all of them can get you to any daemon realm.

Each time the Rifts remain open for 15 turns. You can enter them at any moment you want. If the time when the Rift is open passes, and you are still in the Realm of Chaos, you can finish obtaining the soul. But don't wait too long!

You are competing with other factions

Remember that you are racing other nations to get the souls of daemon princes. After you interact with the Rift, you will see a list of the Realms of Chaos. If you don't send your lord right away, small symbols of other countries will appear next to the god realms. This means that another army has already set out to get the soul. Of course, it's better to choose locations with no enemies. Try to get there first!

The one soul rule 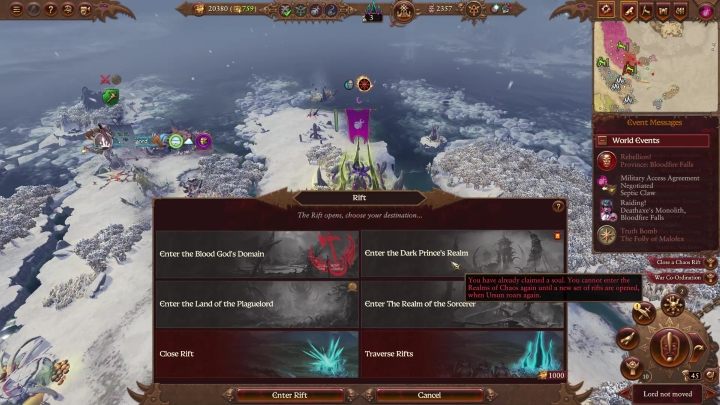 You can only get one soul per one Rift availability period. Once you capture it, the game will teleport you back to where you left from, destroying the portal behind you. Other Rifts will not disappear from the world, but your Lord will no longer be able to pass through them to the Realm of Chaos.

If you try and fail to get the soul, the game will teleport you back to the place you set off from. However, you will still be able to enter one of the Realms of Chaos again (as long as there are still souls to capture).

During every period when Rifts become available, each soul can be captured once, so you won't be able to get it if another nation did so first.

As mentioned before, getting the souls is a race, so if you want to win, you should take out the other lords if you have a good chance to do so. This will help you especially if the enemy leader has been in the realm longer and has achieved more. 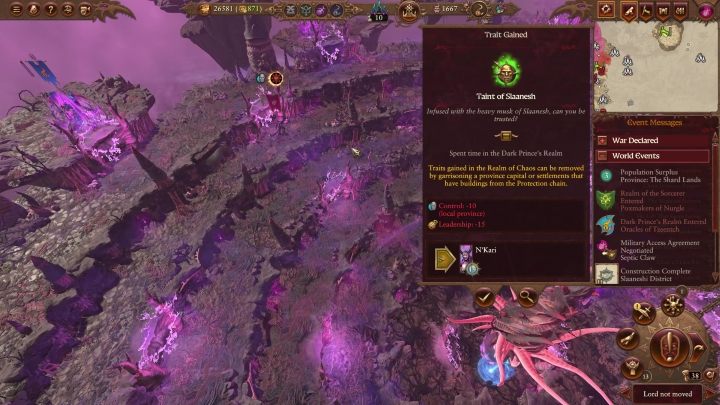 Being in the Realm of Chaos is detrimental for your lord, surprisingly, even if he is a daemon himself. Each turn you have a chance to get a negative trait. They affect your lord's army and the local province, but that's not all. They have levels, and in their final form they can even affect an entire nation.

However, you can cure them by putting the leader in settlements with special defensive structures. Invest in them in the province that will be the location from which you go to the Realm of Chaos.

The Realm of Chaos has its own rules. You will find hostile armies jealously guarding the homes of their masters. You can't draw your mana pool during battles against them. In addition, an army skill will be added to your mana reserves (you can read more about them on Winds of Magic and Spells), but you can never be sure which one you will get.

Every Realm of Chaos has a unique mechanic and sets a different task for the player. Only after completing this mission will you get a chance to defeat the Daemon Prince and claim his soul. You can read more about it on separate pages in this chapter: Realm of Khorne, Realm of Slaanesh, Realm of Nurgle, and Realm of Tzeentch.

The final battle for the soul always follows the same pattern. It is a combination of the typical offensive battle and settlement defense. You can learn more about it on the dedicated page - Battles for daemon souls.

Check out the Forge of Souls page, too, if you want to learn more about the final battle of the campaign with Be'lakor.