From the following page of the guide you will learn everything about diplomacy in Total War Warhammer 3. 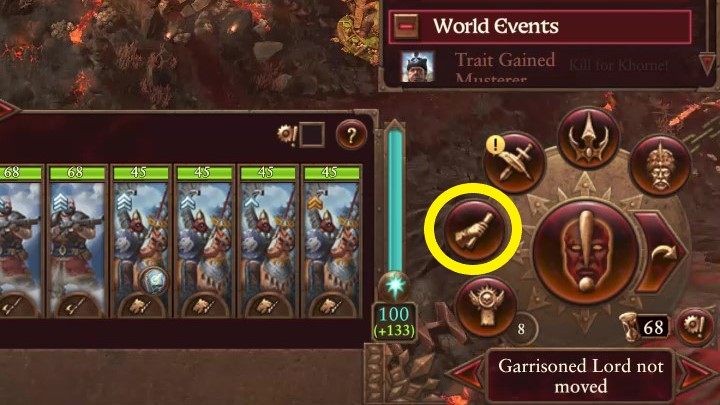 To open the diplomacy screen, select the icon of a hand holding a paper from the round menu on the bottom right. You can also double-click an army/settlement of the faction you want to talk to. 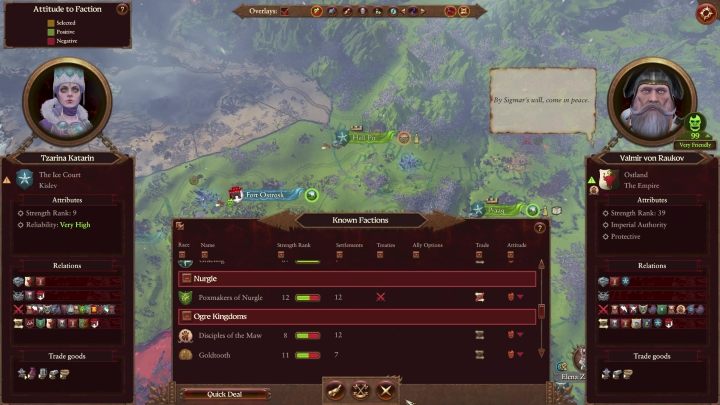 The diplomacy screen consists of 3 main parts. Your faction is shown on the left. Starting from the top, you can see:

An exact copy of this card is on the right, except it refers to the nation you're negotiating with.

In the middle of the screen, on the other hand, you can see a list of known factions. By double-clicking one of them, you will start diplomatic talks. 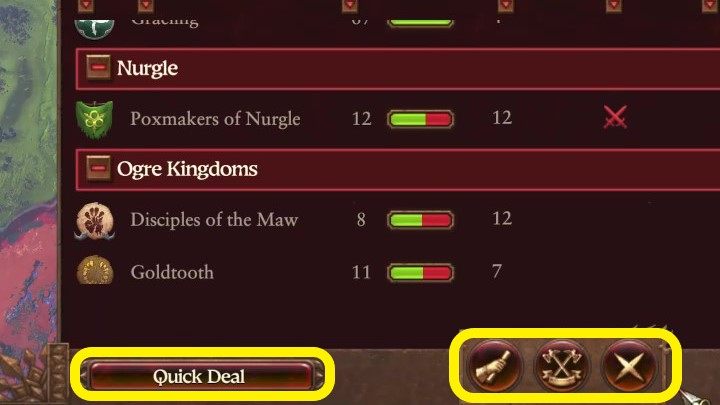 There are buttons under the faction list. The buttons on the right are responsible for:

Notice the button on the left - Quick Deal. It allows you to quickly find nations that are ready to sign any pact with you. This makes diplomacy much easier.

As you gain strength, everyone will want to be your friend. This will mean that other nations will often send you various offers.

Every aspiring diplomat should remember that the AI opponents will try to "cheat" by making financial offers. If an AI offers you a certain amount of money for a pack, or demands a certain amount, it always offers too little/wants too much. If you decide that you want to sign a contract with a given nation, submit a counter-offer and "update" the amount. 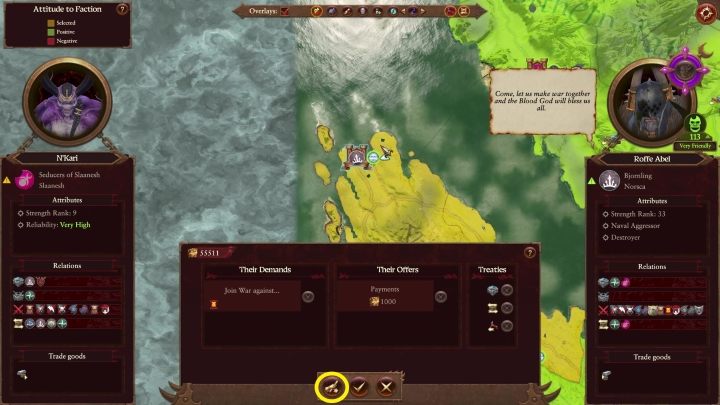 To make a counteroffer, just press the button marked at the top. Then you should remove the amount of money proposed by the opposing party. 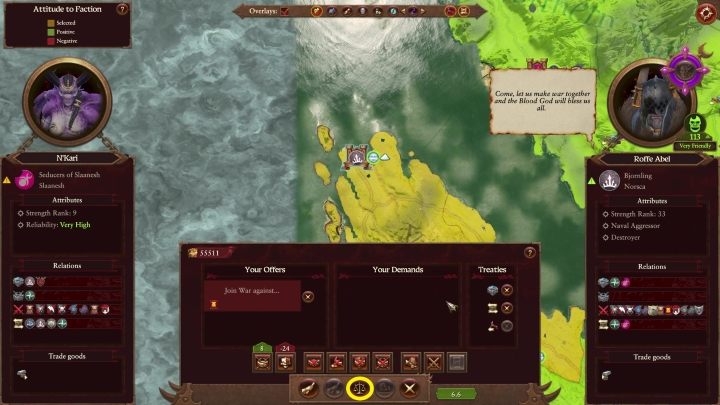 Next, just select the scales button. This will allow you to automatically select the maximum/minimum amount of money that you can claim/offer for a given pact. Now you just have to accept it, and the new offer will be accepted by the AI.

Relations with other nations

When you offer pacts to other countries, remember that they may not always be willing to agree to them. If you want to attract a nation, it is worth starting small. 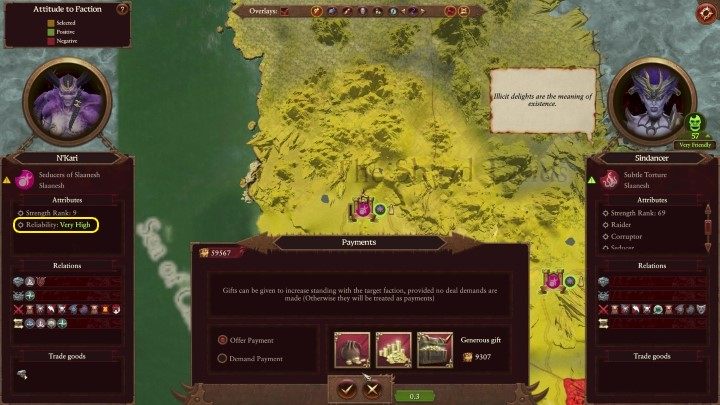 For example, if you want a military alliance, start with a non-aggression pact and gradually build positive relationships. However, if you want to "skip" several stages, consider donating some gold to the target nation. This happens the same way as making diplomatic offers, except that nothing is asked of the other country. You can choose one of the three gift sizes, which has a direct impact on the relationship growth.

Your Reliability also affects the chance of the offer being accepted. You can check it on the left, under the character portrait (it has been marked in yellow in the picture above).

The best and fastest way to find diplomatic partners is to use the Quick Deal button, which we mentioned in the Diplomacy screen section. 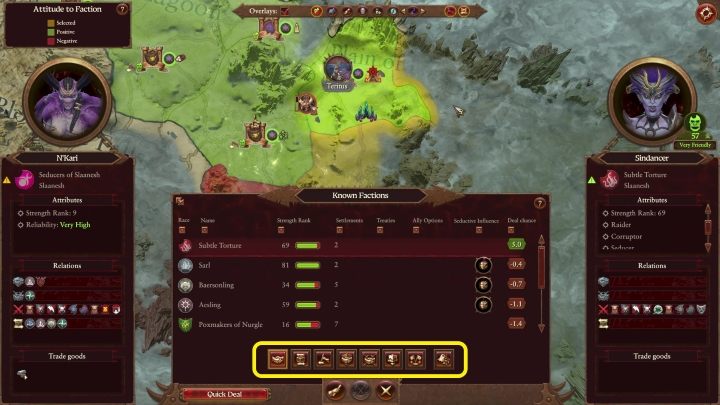 After clicking this button, you will see a list of various pacts. Selecting any of the buttons will cause the known countries to rank from the one most willing to agree to a given proposal.

The pacts that you can sign (starting from the left) are:

You may not see all of the above pacts. If there's no suitable candidate or you can't sign a pact, the button won't be there.

If you have allies and common enemies, you may want to use their help in combat. To do this, click on an allied nation and on the War Coordination button on the diplomacy screen (it's the symbol of two axes under the list of known factions, you can read about where to find it exactly in the Diplomacy screen section). 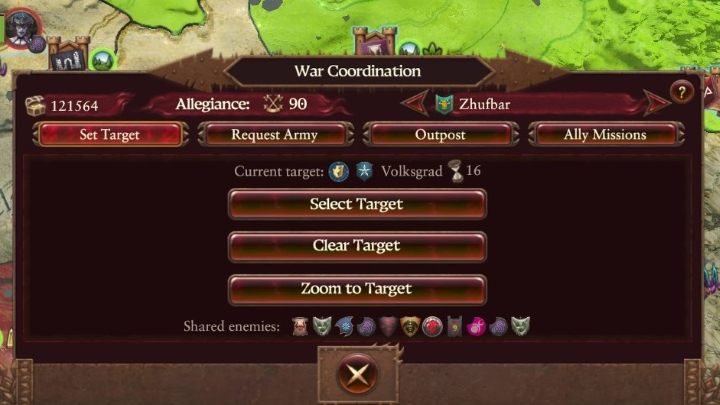 Check the number of Allegiance points. You can find them between the amount of your gold and the nation you chose to talk to. They are a currency in War Coordination. You'll get it passively just for being in an alliance, but you can also get it during Ally Missions.

There are four tabs below it: