This page describes the strategies that the Khorne factions can apply in battle in Total War Warhammer 3. You'll also learn about its lords as well as its army's strengths and weaknesses.

Khorne's army consists mostly of melee units (except for the Skull Cannon). Therefore, when choosing this faction, get ready for a lot of direct contact with the enemy. However, the lack of this race's military diversity makes up for in quality. In addition, Khorne's armies can add new troops even in enemy territory, which makes them a lot more dynamic. 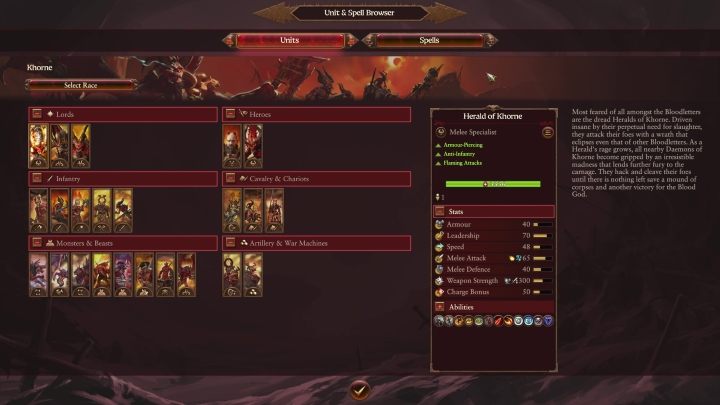 In the early stages of the game, you should definitely check out Chaos Warriors of Khorne. They are the only units with shields in this race. They will hold the front line for you and draw the enemy's attention. You should also add Bloodletters of Khorne (or Exalted Bloodletters of Khorne) - you can unlock them early and they can pierce enemy armor, so they are definitely useful. Therefore, they are perfect for heavily armored enemies. In the later stages of the game, you will definitely want to exchange some of your units for Minotaurs of Khorne, which can handle enemy armies quickly and are quite fast. Make sure you also have units that are effective against large enemies. Chaos Warriors of Khorne with halberds or, later in the game, Minotaurs of Khorne with big weapons, will work perfectly.

The units with the Vanguard trait are a significant advantage of the Khorne army. It allows you to place the army outside your sphere of influence at the beginning of the battle. This opens up new tactical possibilities. You can hide such units in the forest or choose the appropriate positions for them - perfect for flanking the enemy. Fast Flesh Hounds of Khorne, as well as winged Bloodthirsters particularly stand out. The latter are important also as a defense against flying enemy units, as without shooters, Khorne's armies are particularly vulnerable to air attacks. They also deal well with long-range enemy units. 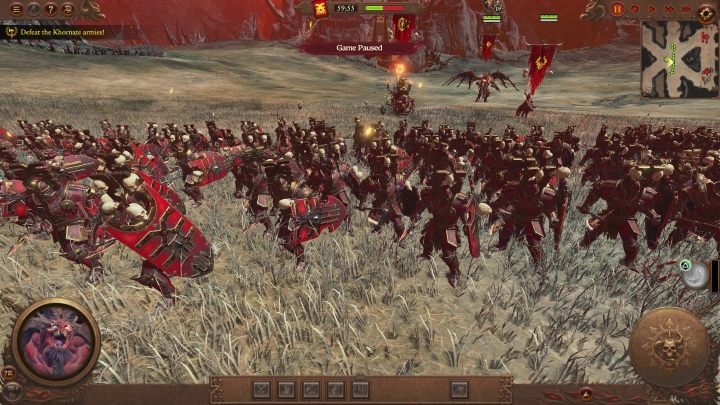 The Khorne cavalry is not particularly diverse, though it's also not bad. However, it is somewhat limited by the lack of speed, and thus worse mobility. This formation becomes a bit more useful as you gain access to Skullcrushers of Khorne.

The Khorne artillery consists only of the Skull Cannon. It shouldn't be underestimated, though, as this cannon can cause huge losses among enemy infantry, and it can also fight in close-combat, if necessary. Your army should also have a place for the Blood Shrine of Khorne combat machine. Not only does it break through enemy lines without any problems, but it also supports your units.

Due to the lack of ranged units, your strategy should be fairly simple - aim for direct contact. Of course, the "head-on" attack alone won't do much. If possible, you should flank the enemy and attack from behind. You can also weaken the enemy's formation by sending combat machines or your lords to the front line.

Attack enemy shooters with the fastest units in order to weaken and disperse them a bit, which will give your infantry some respite. Additionally, use the Vanguard skill in order to choose a convenient strategic position.

Khorne has one legendary lord, namely: 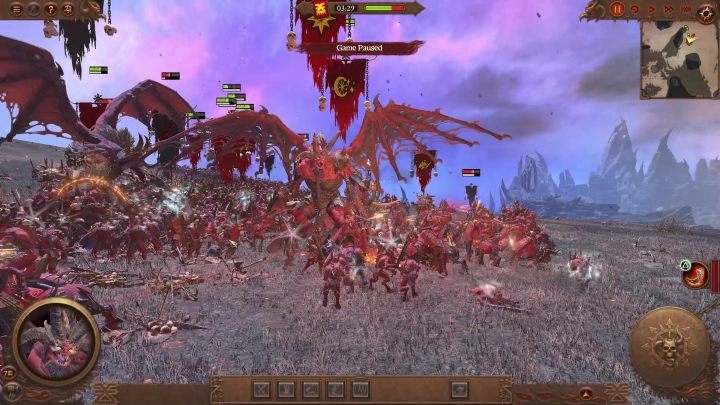 The heroes and lords of this faction are experienced warriors in melee combat. Therefore, don't be afraid to put them at the front. Use them to attack the strongest enemy characters or simply to support the front.