On this page of the guide you'll learn how to start playing as the Grand Cathay factions - The Northern Provinces and The Western Provinces.

Miao Ying, the Storm Dragon (The Northern Provinces) - how to start?

Miao Ying, the Storm Dragon leadsThe Northern Provinces. She starts the game near the wall separating Grand Cathay's lands from Chaos territories. It's in the north-eastern corner of the map.

You are initially at war with The Rebel Lords of Nan-Yang . After your story-mandated conquest of the first settlement you should immediately arm yourself and strike to the north to destroy the Chaos faction in the middle of your lands. This will give you a valuable strategic position.

If no one's done it yet you can take over the Snake Gate (you're bound to have a task to do so at this point). You must be ready to constantly repel hostile forces in this area, so if a different faction took the settlement over, don't worry - it's their problem now.

Meanwhile you can train a second army and send it south. Take over the remaining hostile lands and the seemingly uninhabited settlement of Tai Tzu. There's a Skaven lair there, so watch out. 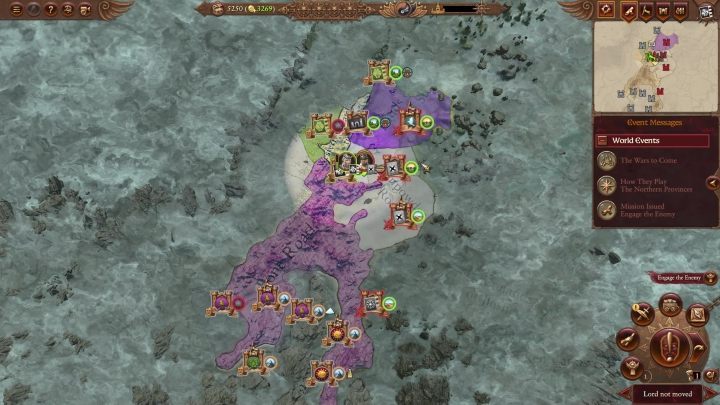 After conquering the lands described above you'll be surrounded by Grand Cathay you have neutral/positive relations with. Think carefully about your next move. Some of the countries around you are worth forming a confederation with. You should consider this option. Not all nations will be willing to peacefully join your cause though. One such example is your brother.

If you decide not to conquer Cathay in favor of playing more peacefully, you have two possible directions for expansion.

To the west, behind the wall, you'll find Chaos territories. These lands are corrupted (which fatigues your army) and full of enemies. Its settlements are extremely hostile towards you, so settling there will result in penalties - more expensive buildings, longer recruitment, lower income, etc. If you settle there despite all these drawbacks, you'll be able to keep the attacks on your walls in check and push Chaos back.

South seems to be a slightly easier direction for expansion. The mountains there extend further down the map. The lands are inhabited by ogres and dwarves. Behind them lie orkish lands. This territory won't be easy to colonize but it's not as hostile as Chaos lands. There's no permanent corruption there either, which means it's easier to navigate.

The further fate of the factions living there depends on you.

Zhao Ming, the Iron Dragon (The Western Provinces) - how to start?

Zhao Ming, the Iron Dragon leads The Western Provinces. He starts the game in the north-eastern part of the map, near his sister. His faction doesn't start the game right by the Great Bastion, which means he doesn't have to concern himself with Chaos just yet.

The Skaven have a lair right above your starting settlement. You must deal with them quickly. This will let you reach the rebelling Dissenter Lords of Jinshen. They serve as your main opponent in the early game. Their settlements are to the north and west of your starting location. 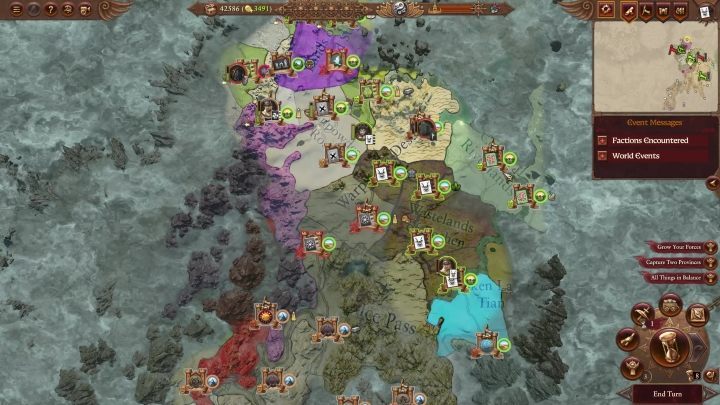 You start the game with a single settlement. On the picture above you can see the empire I started building.

To the north, behind the lands of the Dissenter Lords of Jinshen, you'll find the seemingly abandoned settlement of Tai Tzu. This is a Skaven lair and is worth conquering - you can never have too much land.

There aren't any more obvious enemies in the general area. Your next step could be helping your sister and waging war on the Rebel Lords of Nan-Yang. This will bring you closer to the wall and grant you easy access to a small Chaos faction in Grand Cathay's lands. You can also take over the Snake Gate if it's still free for taking (although it's probably not).

No matter what you do, soon you'll have to choose whether to wage war on other Grand Cathay nations or develop beyond your country's borders. You could create a confederation with friendly nations to spare resources and time. This may have to wait until later on, as your faction's leaders are initially reluctant to forming confederations.

If you decide to expand outside Grand Cathay, south is the most logical choice. This mountainous terrain is dominated mainly by the Ogre Kingdoms. There's a possibility they'll declare war on you without any prompting. You can also conquer the Chaos lands beyond the Great Bastion in the north-west. You shouldn't do so though unless you're in control of a gate (most likely Snake Gate) - if you're not, your only reward will be uninhabitable land vulnerable to Chaos' influence. While the ogre lands also aren't an ideal place to live, they aren't corrupted and are slightly easier to settle in.

I leave the country's further fate up to you.