On this page of the guide to Total War Warhammer 3 you'll find information about the strategies that can be implemented by the Kislev faction. You'll also learn about its lords as well as its army's strengths and weaknesses. 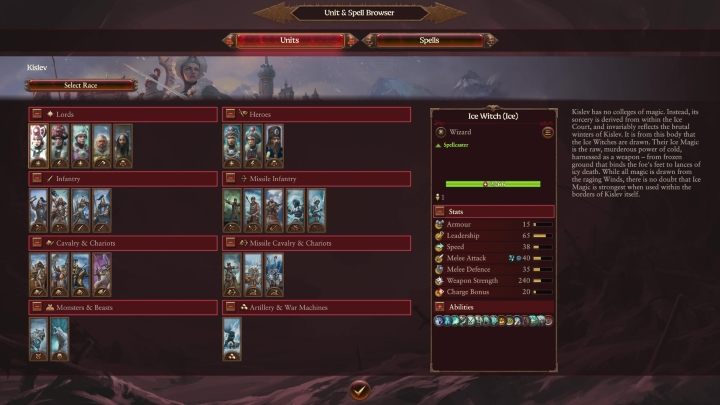 Kislev seems to be the most balanced faction military-wise. Boasting solid infantry and cavalry, Kislev can face any threat they encounter.

The faction's infantry is well-armored and can easily withstand even the most powerful hostile charges. Most of the infantrymen are equipped with firearms aside from their main melee weapons, which will let you weaken enemy units before they reach you. Their shooters and archers can fight in melee if the need comes and are quite competent at it too.

Kislev's cavalry is also quite respectable. They can recruit light cavalry and two squads of heavy cavalry. Kislev can also deploy bear riders who serve as powerful tanks. They can also be supported by chariots which trample their foes.

Unfortunately no one is perfect - Kislev doesn't have a rich selection of artillery and war animals, althought their powerful elemental bear can change the tide of any battle. They're also slow, so there's no way you'll outmaneuver the enemy.

Kislev is best suited for defensive battling due to their slow and well-armored infantry equipped with firearms. You should stand your ground in an advantageous position, such as the top of a hill, and wait for the enemy to attack. Once the opponent reaches your fortified lines you should send in your cavalry. When the enemies are busy with melee combat flank them and attack them from behind to inflict as many casualties as you can and lower their morale.

If you're the one attacking, you should consider provoking the enemy somehow - with a spell or artillery. If no such possibility exists, hold the line while attacking and send your cavalry into any weak spots you see. Flanking is always a good strategy!

Kislev is the only faction that can have 3 legendary lords. They're powerful commanders who can turn the tides of battle and each one has their own country by default. However, by starting the campaign as Tzarina Katarin and fulfilling certain requirements you can unite them all under one banner. These are:

Kislev can also recruit Boyars (lords specializing in melee combat) and Ice Witches (Ice and Tempest) who can shower the enemies (or allies) with magic.