Undercover Network and spy actions in Total War: Three Kingdoms has also undergone fundamental changes - it now functions on the basis of other mechanics, requires more attention, but also gives much greater tactical capabilities. If you want to use this mechanics effectively, and you are overwhelmed by the vast possibilities associated with it, in this chapter you will find answers to all your questions.

To use the mechanics of Undercover Network, you must first reach the rank of the Second Marquis. When you do that, you'll unlock a whole new mechanic, which you can turn on by clicking on the eye icon in the top left corner of the screen or pressing the "5" key. Inside this window you will find all the information related to undercover activities - the characters who will be happy to take these practices, the factions to which you can send a spy, as well as the total number of spy positions that you have at the moment. To be able to use this mechanics, you need to have the appropriate characters. Those who are happy to take such work will have an eye icon in their portrait. Thanks to that you'll know that they can spy for you. 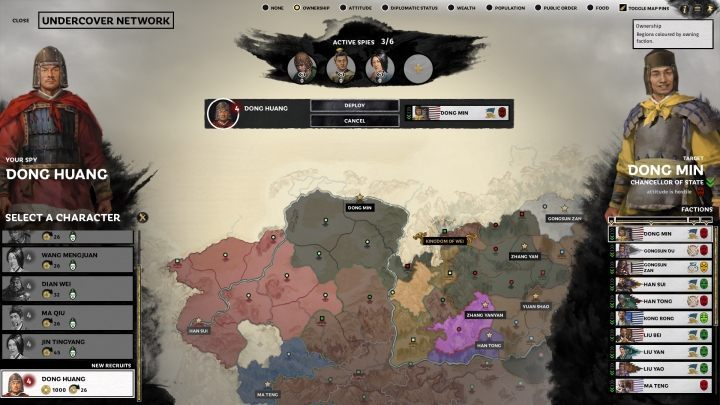 The appearance of the Undercover Network screen.

When you hire such a character, go to the Undercover Network (press 5 key) and click on the "+" icon at the top of the screen. Select the desired character from the list on the left, and then the faction on which you want to send a spy and confirm your choice ("Deploy" button). After performing this operation, you will lose control of the character. The person you have chosen will travel to the selected faction and take measures to get hired by the enemy as your agent. By the time the character is making friends with the opposite faction, you will receive basic information about the enemy - the amount of gold, food, and other resources, the population, and the number of settlements or administrator positions he/she has. In turn, when the character finally gets to the enemy ranks you will get new options, depending on the purpose for which the enemy has hired your agent.

Note - there is never a guarantee that the enemy will hire your spy. It all depends on how attractive figure your spy is - level, class and skills are valuable benefits here. If the character will not be hired after a few turns it returns to you. After that, you may send your spy on a mission once more time.

When the character is sent as a spy and gets in the ranks of the hostile faction, you will gain access to a new spy actions. These are divided into four groups:

Note - remember that a spy can be placed at the same time as an administrator and embodied in the army as a General. This will give you access to two additional action groups at the same time.

To make things a bit more difficulty, you can't use the undercover network actions and spies all the time and without limitations. These (when you already open access to them) are performed using two resources - Undercover Network and Cover. The first one is a resource that is generated by your spies - it simply represents a spy network build through Your agents. The second represents the level of "merging" of a spy into an enemy faction, his "cover" - the longer he or she infiltrates the enemy faction, the faster he or she is going to accumulate these points. 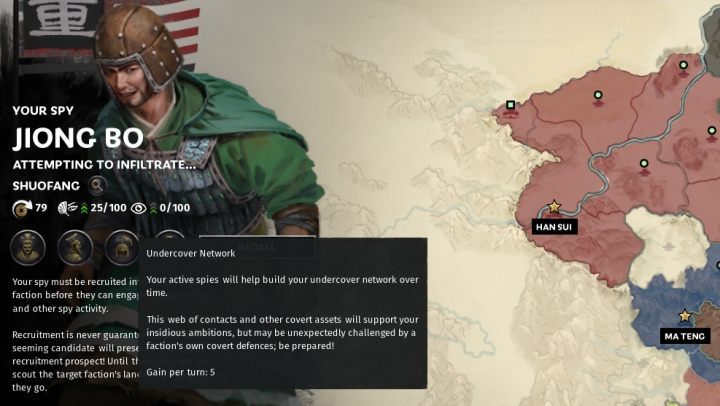 The number of available resources can be checked on the spy's portrait.

If you want to perform any spy action (within the scope described in the previous part of the groups), you must spend an appropriate amount of both of these resources. As you can guess, the more modern and effective the action, the costs will be greater. What's more, at the moment of commissioning the action, the spy will have a chance to carry them out - if this one turns out to be too small, you will be able to use additional points to make it successful. If you do not have free points, the spy will be captured by the enemy faction - he can be killed, released or turned in the ranks of the enemy as a double agent. 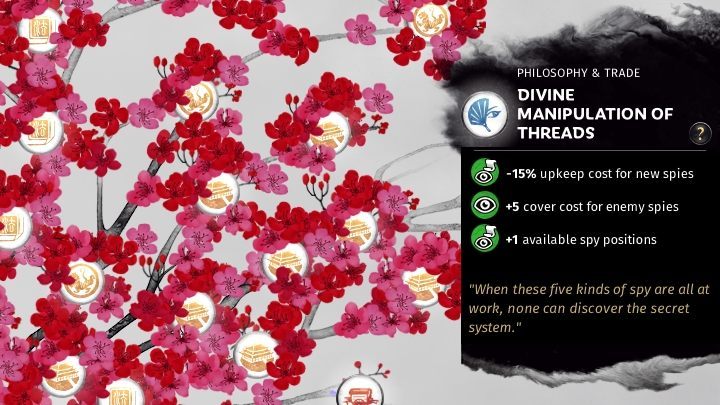 The number of available positions for spies can be increased, among others, thanks to reforms.

Finally, it is worth mentioning a few tips that will make the use of undercover network more simple and enjoyable. As the following: