During the game in Total War: Three Kingdoms, you will quickly take part in battles with other armies consisting of different types of units, in various proportions. What units are used in the army depend on the player's individual preferences. However, it's worth remembering about a few things that can have an impact on your success on the battlefield. These have been described in this section.

Total War: Three Kingdoms has introduced significant changes in the functioning of the army to the series. There is no longer a single "commander" who has 19 other units assigned to him. Instead, there can be up to 3 generals (including the army leader) inside the army, and up to 6 detachments of any units - infantry, cavalry, ranged shooters or artillery, that are assigned to each of them. It makes the player more attached to the units. Additionally, units can receive bonuses from General, to whom they are subordinates. Other generals (in most cases) do not affect the efficiency of the troops which are not assigned to them.

Army - how to select the best composition? 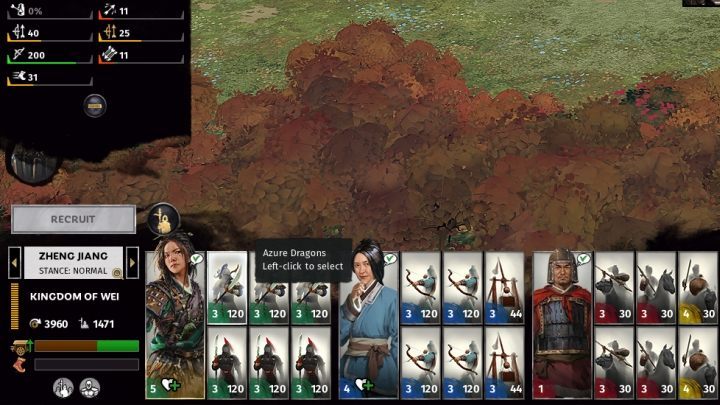 Optimally a good army consists of the following: 6 infantry units, 6 units of cavalry, 4 units of archers and 2 units of siege weapons.

Keeping in mind the above paragraph, you should remember that it is worth hiring specific units for a particular General. Strategist is perfect with ranged units and artillery away from the center of the battle offering many powerful bonuses to these units. In turn, Champion or Vanguard may work better in the center of the battle. This should be adhered to, as it will increase the effectiveness of the troops to the maximum. As for the composition of the army, it is necessary to pick them up in this way:

If we are talking about the number of units and squads in the army, it is necessary to adhere to the following rule - 3-4 units of cavalry, 3-4 units of shooters/ranged units, 3 units that are effective against enemy cavalry and the rest of the free slots - just for infantry. Also, try to push 1-2 units of siege engines - these will be useful both during the attack and in defense. They will give you a huge advantage over the enemy. Especially if he doesn't have this kind of equipment. This type of army will be effective against any hostile military formation.