Food, in addition to gold, is one of the key resources which level needs to be taken care of in Total War: Three Kingdoms. Thanks to food supplies the population will be fed and happy, which may help in avoiding problems with public order. Also, it may come in handy to earn some gold. In this chapter, we will take a closer look at this resource (food).

Food - how to produce and increase production? 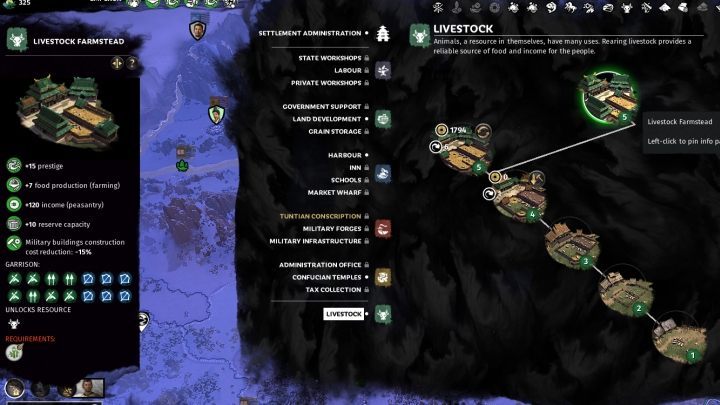 The main source of food are buildings in small settlements within the commandery.

To be able to produce food, you need certain buildings, such as Livestock Farms, Farmlands or Fishing Ports. These buildings can only be erected in specific settlements - check the details below the name of the settlement (names of buildings available). For example it will be "Hepu, Fishing Port", "Wuling, Livestock Farm" and so on. Only in this type of settlements the above mentioned food producing buildings can be built. Despite that , you can also find buildings that offer the opportunity to purchase food in other settlements within the commanderies, but it is worth using a valuable free space to build something else. Moreover, you may get the food from the trade. So, you may get it from another faction in exchange for other goods - influence or gold.

However, in the rest of the settlements included in the commandery, it is possible to construct buildings that offer a percentage premium for food production. Most of the positions at the Court, including the administrators, can increase food production. There are a lot of reforms that after unlocking may give a bonus to collecting food from breeding, growing or fishing. 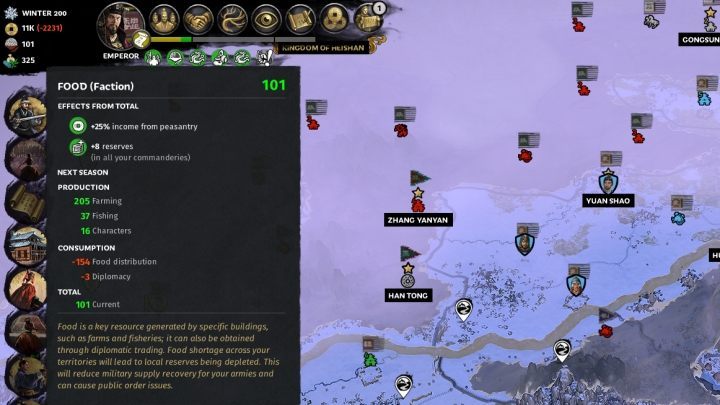 Food supplies and reserves are as important as food production.

In addition to the production of food, it is also important to store it - this takes the form of food reserves. Reserves determine how much food your Kingdom can store in case its production would turn out to be insufficient. Reserves are used when your commanders consume more food than they can produce, and the level of reserves can be increased with the help of appropriate buildings as well as administrators in the Court.

Another problem related to food are Military Supplies. Military Supplies are associated with each army and demonstrate the army's ability to replenish resources while in the field. When the level of resources of the army is high, the units included in its composition will have a high morale. At zero level the morale suffers dramatically, and the army will reduce its numbers with each round due to Attrition. The level of military supplies is replenished when the army is in your territories where there is a suitable food production. In turn, it decreases when the army is in enemy territory.

Note - remember that the seasons affect the amount of military supplies consumed by the army. Especially relevant here is the winter season, during which the army consumes a lot more food.