Total War: Three Kingdoms introduced the mechanics of the Court, in which the player has the ability to appoint generals and members of the Royal family to individual positions - advisers, teachers, Ministers, as well as administrators. The mechanics of the Court is described in a separate chapter of our guide, but in this section we will focus on the above mentioned administrators.

Administrator position - what is it? 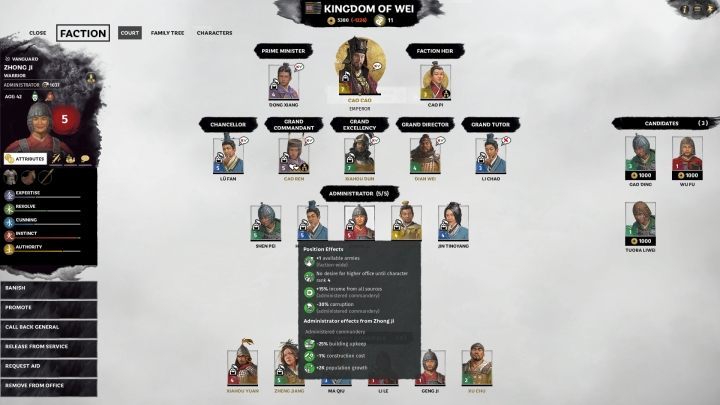 Depending on the General's grade, the administrator position will offer other benefits to the commandery.

Administrator positions are a group of Court's special functions (vacancies) which can be assigned to generals or Royal family members. At the beginning of the campaign, the player can allocate only one General for such a position, but along with the progress and development of the Emperor's level, as well as some reforms, this amount can be significantly increased. Moreover, unlike other posts at Court, administrators must be assigned to a specified commandery - when this happens, all bonuses from their position will be added to this commandery in which they perform the function.

The generals assigned to a specified commandery offer two types of bonuses - an increase in the number of troops recruited by 1, as well as an increase in the income of this commandery. Also, there is a decrease in its level of corruption. In addition, they also offer bonuses. It applies to the commandery controlled by them and are dependent of their class. It looks like this:

As you can see, the right choice of generals for the posts of administrators can significantly affect the development of commandery and the entire faction.

How to increase the number of administrators? 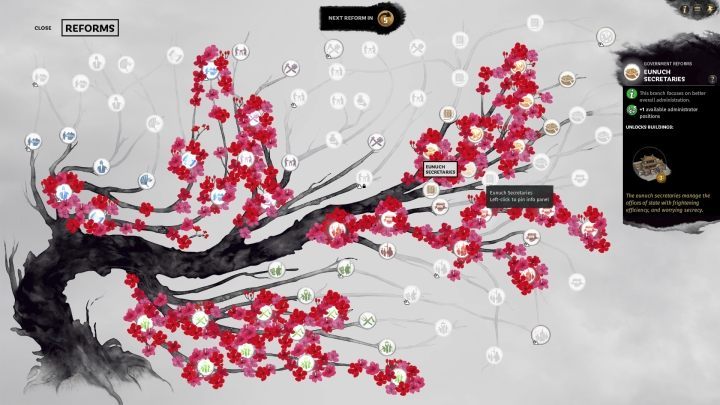 The number of available administrator positions can be increased through reforms.

The number of administrator positions can be increased in two ways - progress of the Emperor's level, i.e. the rank of the faction's Commander. This level is increased by conquering new territories - represented by progress bar at the top of the screen. The second way is to unlock and perform the relevant reforms. In the reforms window you will find two such reforms that allow you to reach up to 7 administrator positions.