The court is one of the main gameplay mechanics in Total War: Three Kingdoms. It gives great opportunities for you to develop your faction accordingly to your preferences. It also has a decisive influence on its functioning. In this section, you will find all the necessary information to understand how the court works.

The court - basic information and posts

The court window can be opened by clicking on the corresponding icon in the upper left corner of the screen, or by pressing the "2" key. This opens a new window divided into three tabs:

The main Court tab contains information about the available posts. Move the cursor over a post to see a brief explanation of it, along with the rank you need to reach to unlock it. Once the post is unlocked, you can allocate it to one of the available people at court - a family member or a general. Depending on the character class (Champion, Vanguard, Strategist, etc.), the assigned person will offer various bonuses to the entire faction as long as they hold that position. In addition, the higher the rank of the character, the benefits they will offer.

Note - some leaders offer a larger number of specific posts (e.g., Liu Bei can allocate more administrator posts), others may have these positions replaced by others (e.g. Gongsun Zan, who has no administrator posts - they are replaced with military posts). 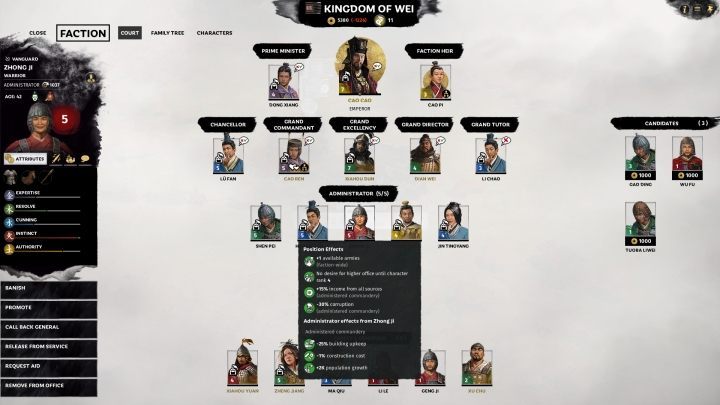 Choosing the appropriate character for a post is important.

Remember that you shouldn't base your decision on a character's level only. Depending on the character class, the bonuses offered will vary greatly, giving a boost to the economy (Strategists) or military capabilities (Champions or Vanguards). It is also important to choose a position suitable for a given character - a Strategist assigned to Grand Commandant post won't give you all the perks that a Champion would give. Also, that character will receive satisfaction penalties.

Usually, "consultant" posts such as Prime Minister, Chancellor or Grand Tutor should be assigned to Strategists. The remaining positions should be assigned to military class characters like Vanguard, Champion or Sentinel. Administrator posts are the exception - here, you can assign any figure. This won't affect their satisfaction but will offer bonuses that depend on the class.

Maintaining satisfaction on the court 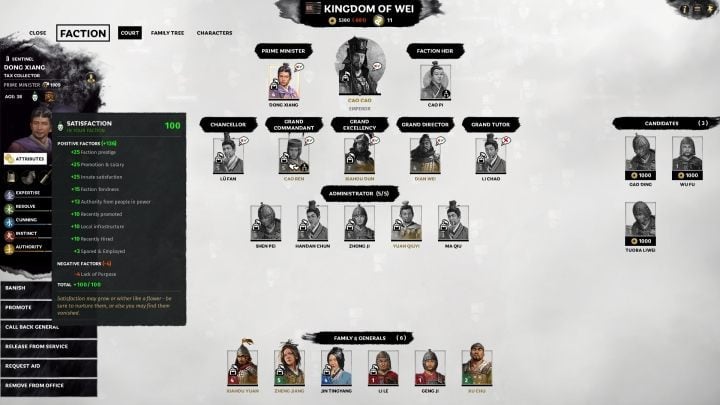 The last thing you need to pay attention to when it comes to the court is maintaining the satisfaction of the characters that are assigned to the posts. Satisfaction determines a character's happiness - it doesn't affect in any way the bonuses offered by the character. You need to keep it a high level to make that character loyal to you. If satisfaction drops to a low enough level, that character may decide to leave you and move to another faction - often taking troops that have been assigned to that person. Thus, you may lose a character, their equipment, and an experienced army.

The satisfaction level is influenced by the following things:

Maintaining satisfaction is crucial - you should monitor your court members constantly.