Probably a lot of players who have just started their adventure with Total War: Three Kingdoms wonder why after the recruitment of troops they have a practically very low quantity and are not suitable for battles? This topic will be discussed in this section. 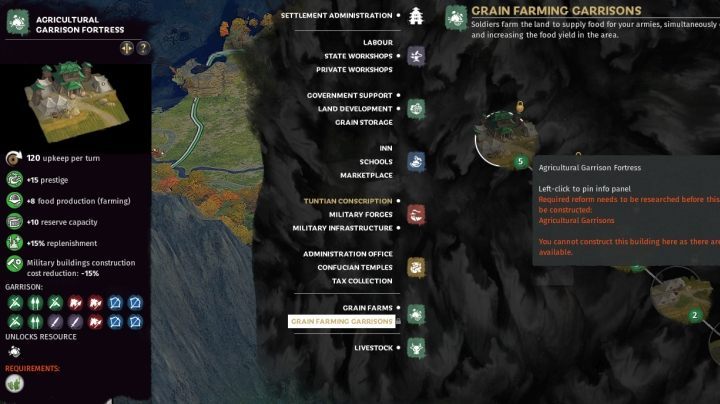 One of the buildings designed to accelerate the recruitment and extension of troops.

Unlike other parts of the series as well as most strategy games on the market, Total War: Three Kingdoms takes a different approach to the mechanics of training units. Instead of the typical use on the battlefield, the squad/unit appears with a small number of soldiers - during subsequent turns the squad complements and finally after some time it becomes complete and fully used in combat. Obviously, this has its pros - instant recruiting even the whole army - and cons - the inability to use these troops in battle.

It is impossible to do anything with this mechanics (apart from some warlords who offer such an opportunity for some units and troops - their full description can be found in a separate chapter of this guide), but you can make it more "tolerable". The recruitment speed (as well as replenishing losses after the battle) is dependent on the Replenishment parameter. Its level is affected by the following:

For this reason, it is necessary to build the appropriate facilities inside commanderies - you don't need that much space, one construction of this type is usually enough. It is also necessary to choose right generals for administrative positions and distribute skill points.

Note - the number of how many units of a selected squad will appear in the next round can be found in the squad icon. This is represented by a yellow indicator.