Total War: Three Kingdoms adds a new version of the graphics that allows you to customize the size, or rather, the number of troops on the battlefield. Basically, this affects game's performance a lot, and has an impact on the gameplay. This chapter will discuss this issue in more detail.

How to change the size of units?

Unit size can be adjusted in the game menu, or rather from the graphics settings window tab. When you enter the Advanced tab, an option will be available at the bottom of the left column. Here you can choose one of five values - Small , Medium, Large, Ultra and Extreme. After you accept the changes, you must start a campaign to see the differences instantly. 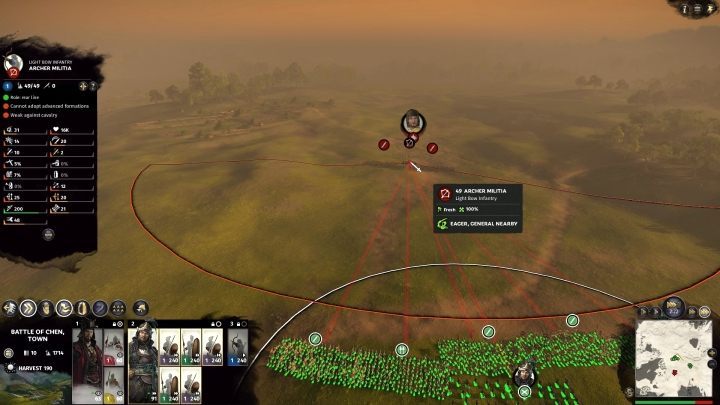 Even the initial clashes look amazing with the army level set to Extreme.

Note - you can only change the number of units before the campaign starts. When the campaign has already started, you won't be able to change this setting - it will be inactive! Therefore, you should think about whether the transition from the standard settings to extreme is going to be a good idea on your rig.

Given the fact that this parameter greatly affects the number of units on the battlefield, it has a huge impact on the smoothness of the gameplay. By setting the number of Ultra, the number of troops will increase by 25%, with the Extreme setting this figure will increase to 50%. In the army, consisting exclusively of infantry, on the standard Large setting consists of 2880 units (3360 in the "Records" mode). Switching to the "Extreme" setting raises this value to 4320 (5040 for the "Records" mode).

If you add the enemy army and additional troops taking part in the battle, the computer will display thousands of new units. If your computer does not have an adequate supply of power in relation to the hardware requirements (described in the "Appendix" section of this guide), it can very quickly turn out that Total War: Three Kingdoms will be just unplayable - or simply it will require you to significantly reduce the graphical settings.

Note - the number parameters do not change during the game, only at the start of the campaign. It is worth considering if your don't have a powerful system. In further parts of the campaign in the battles there will be more than 2 armies with a lot of special effects such as fire arrows. It may turn out that after dozens of hours invested in the campaign, further play may not be possible, because your PC is too slow to manage with such effects and dozens of 3D models.

The effect on the gameplay

In addition to a significant impact on performance, changing the number of troops also has a huge impact on the gameplay itself. This is manifested as follows:

As you can see, the standard graphics setting can have a huge impact on the gameplay itself.