First, you'll fight alongside individual factions that will pose no threat to your growing faction. However, after a few dozen turns you will have to face much larger opponents who may be have some military alliances with their neighbors. Before starting a war with this kind of opponent, it is necessary to prepare and take care of three important things - the economy, the security of the conquered territories and the power of your army.

When thinking about economy, in Total War: Three Kingdoms, you have to consider several factors. First of all, it is the state of the Treasury. Maintaining positive outcome of the revenue before the war is not that important - even if you lose a few hundred units of gold per turn, it will not be a problem if there is enough stock in the vault. However, if the condition of the treasury drops to 0, the fraction will enter into the stage of bankruptcy. Taxes will be raised in your settlements to reduce the problems. This will cause a powerful punishment for public order, and you will not be able to recruit troops or construct new buildings (you will even lose the possibility to repair damaged ones). Also, public relations level with other factions will decrease a lot. In addition, with each turn you will lose part of your troops. 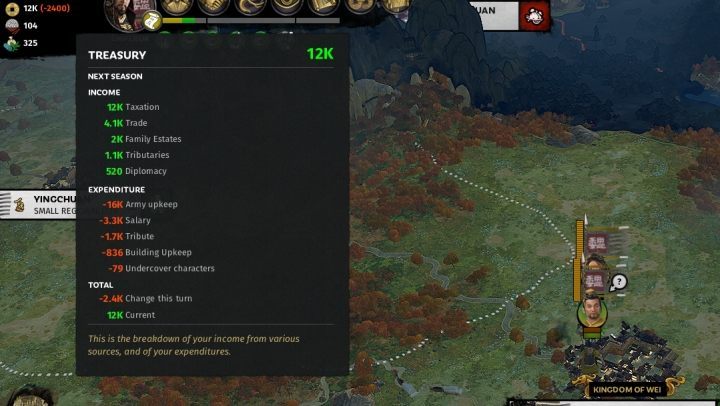 Treasury level and its status in the next round.

The key is to take care of the state's treasury before starting the military expansion. Take a look at the potential settlements that you will need to conquer (or that you want to gain before you accept the enemy's surrender). Calculate roughly how many turns such an expansion can take, and then forecast how much gold in the vault you will need to prepare for such a scenario. Add a small excess, in case of unforeseen expenses, and you will receive the amount that is going to be necessary for the conquest. It could be 5,000 gold or even 20,000 pieces of gold. The problem disappears if income and revenues are positive - then you do not have to worry about the state of the treasury. 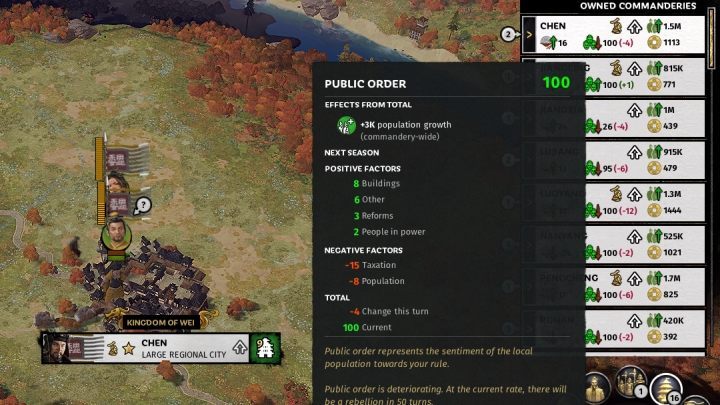 It is necessary to take care of the level of public order in commanderies.

A separate issue is the state of food supplies and public order. If the sudden decrease of the first factor is not that dangerous you have to stay alert considering the second one - public order is very important. Inspect the captured settlements and make sure that in any state the public order does not fall sharply. If such a situation occurs, it is worth turning off the local taxes, or quickly erecting a building that will give a significant increase in public order. Remember - when public order falls to -100, the settlement is going to start an uprising and you may lose control of it, and there is nothing worse than civil war while fighting the neighbors. As a rule, the level of public order is influenced by the following:

When the creation of a stable economy is maintained, you need to think about protecting your territories. First of all, you should check which garrisons have settlements located on the outskirts of your territories, especially near diplomatically unstable neighbors. If the garrisons are powerful, an attack by a small army shouldn't scare them that much. In addition, if the settlement is located in a narrow passage that is likely to occur in the path of enemy troops, you can properly protect this settlement, paying special attention to the larger structures that will expand the garrison. In an extreme case, you can also leave there a huge and full army which will add a serious increase to the public order. 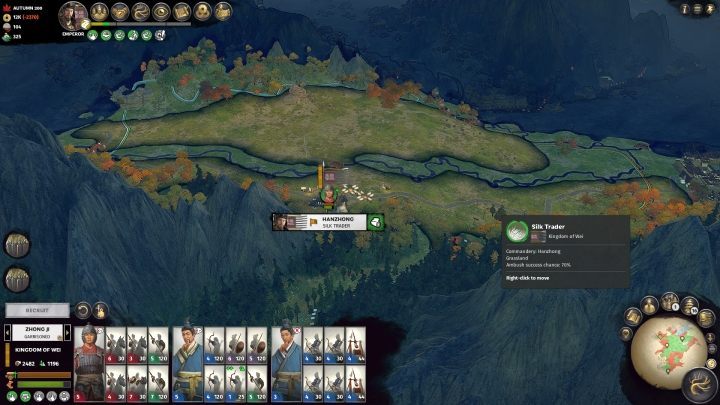 If you have such an opportunity, you should use an additional army to protect the conquered territories.

The most important thing, however, is to look at the map of the world and test your diplomatic relations with the surrounding factions. However, do not look at the level of relations - if they are positive, neutral, or rather negative - but at their change rate and time rate of dynamic changes. This is especially important with actions taken by you or your ally, which dramatically undermined the relationship - declaring a war on someone, entering into an alliance with the enemy and so on. If the relations in the last rounds have gone badly wrong and the subsequent rounds show a similar trend, you can almost be sure that the neighbor will attack as soon as your army leaves the territory.

Before the beginning of any war or battle it's worth to warm up the relations a bit, coming in slightly adverse agreements (for example, offering food to enemy for free). This will stabilize the situation for some time. You can also quickly begin an alliance with another neighbor - in case of an attack, you can count on his help. Also, remember that newly started alliances and ended wars are almost a guarantee that for another X turns, your relationship will not deteriorate. Breaking the alliance or declaring a war immediately after the conclusion of peace ends with a powerful punishment in diplomacy with other factions - no one will tolerate such actions.

The last, key thing is proper preparation of your army to the military conflict. It is worth to focus on the most technologically advanced units that are the most powerful ones in the game. They will give you advantage over the enemy. However, don't forget to focus on hiring the most expensive units, especially one type. The cost of a unit does not always go hand in hand with its characteristics on the battlefield, and clogging the entire army with one type of units is likely to end in a quick defeat when fighting with a more balanced army. 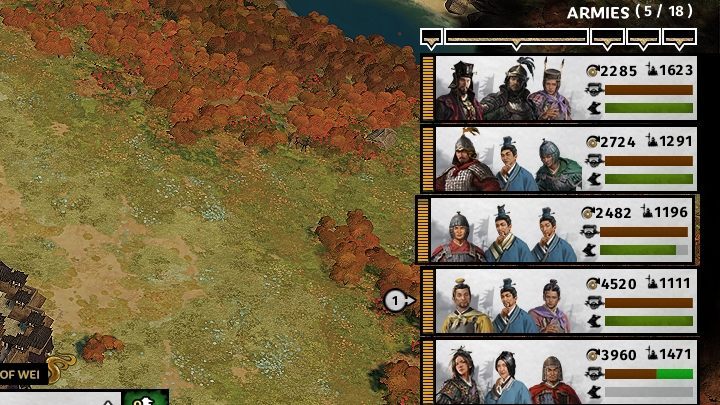 It's worth to prepare your armies to war.

It is necessary to take a proportion of various units (not counting generals): 3-4 squads of ranged units, 3-4 cavalry units, 3 anti-cavalry units and the rest consisting of troops effective against infantry and other types of melee opponents. You can additionally devote 1-2 troop units for siege machines, especially if you want to win a large, well-fortified settlement.

The second important objective is to have a sufficient number of troops in your army. Only one army is not enough to conquer the larger factions - their settlements will often be located in large garrisons, backed by a neighboring army. Therefore, it is better to go to the conquest, at least with two full armies. And it would be best to have generals with several additional ranks. If you are planning a really big expansion, you should take additional troops with you - they will allow faster conquest of settlements, as well as secure those that have already been captured.

When to fight and when to retreat?

As a rule, whether it is worth starting a war with a faction and when to begin such expansion depends on several factors. The first is the size of the faction. If the faction that you want to capture, there are 2-3 of the settlements (at a time when you've a dozen of those), you can try to take it as a vassal, then annex it. Thus, you will absorb the territory without the need for war - but this is due to the high cost used in diplomacy and the potential deterioration of relations with other factions. If you prefer power methods simply attack this faction - in battle it will not have any chances with you. Also, you will save a lot of time and gold on diplomacy. 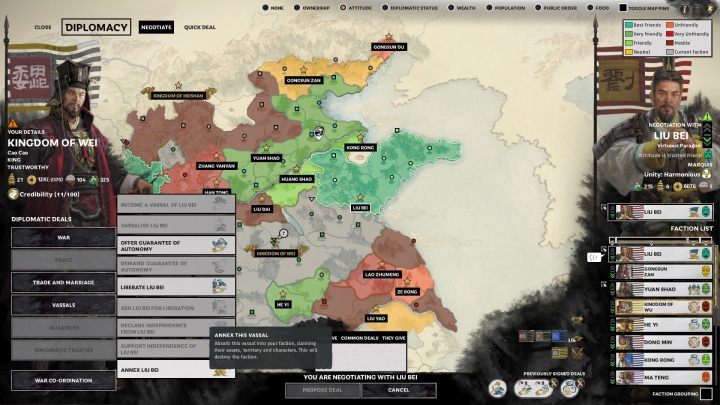 Sometimes it's worth using diplomacy to gain territory without a fight.

If a faction is to big and powerful for you, then you shouldn't attack it. Of course, you can win a war with a strong faction, but it will take a lot of valuable moves, during which another enemy can attack you, or even get support from the enemy. It's also worth checking out what kind of relationships your neighbors have with your potential target - how you'll do that, you may find in the Diplomacy section of our guide.

The most important point is to remember the factors described in the previous paragraphs. If your economy is not ready for war (public order level is a disaster, or the treasury is empty), you do not have a ready army, or your lands are not sufficiently protected, it is better to postpone the plans of conquest and take care of these problems in the first place.