While playing a story campaign in Total War Saga Troy you don't have to use your own army to expand your empire, conquer more settlements or even take over entire provinces. As a leader, you can also use the services of versatile emissaries. The game features three basic types of emissaries, and each has a different role to play in the settlement, on the campaign map, or before the battle begins. In addition to these, you can also get access to epic emissaries in the Total War Saga Troy, which provide some unique and special services.

Each envoy has its own passive and additional active skills that can be used on the campaign map, in the village or before the battle begins. In the Total War Saga Troy, there are three basic types of emissaries / envoys that you can hire:

Types and their roles

Epic envoys are a unique type of agents who have a huge impact on the campaign in Total War Saga Troy. Access to Epic Envoys can be gained by the mechanics of Divine Will. Epic Envoys and Emissaries include:

You can use an epic envoy during a limited number of turns. Once the emissary performs the action he was ordered to do, he will leave your hero. Then, you have to recruit another epic unit to reuse his/her skills.

In order to be able to start recruiting ordinary envoys and epic envoys you will have to build a certain building or get an appropriate level of God worship by using the mechanics of the Divine Will. Here's how to recruit individual envoys: 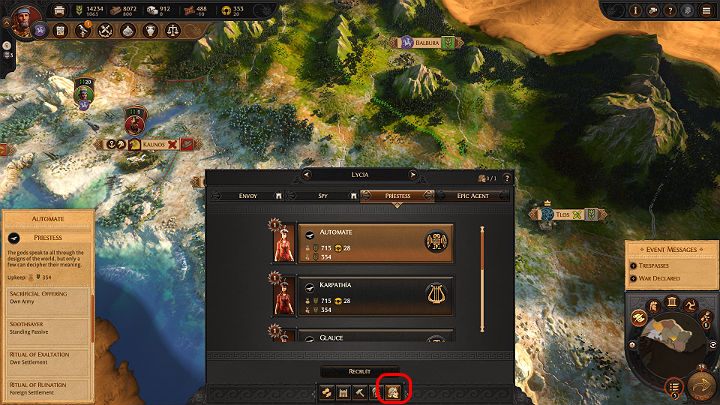 Once you meet any of the above conditions, you will be granted access to the recruitment of epic envoys or standard envoys. Click on a specific settlement, then click on the Recruit an Envoy button, which has been highlighted in the above picture. A new window will pop up - you can choose between available envoys and decide which one you want to recruit. To recruit an envoy you have to pay with resources and gold.