In this chapter of our game guide to Total War Saga Troy you can find information about the most common bugs occurring in the game as well as when you try to run it such as: Black Screen, Crash, or low number of FPS. We have prepared various solutions that may help you solve these technical problems.

Bugs in the Total War Saga Troy may occur quite often and are usually caused by player's hardware configuration. Some of the most common bugs in Total War Saga Troy are, among other things, sudden blank black screen, runtime crashes, incorrect screen resolution, and low number of FPS. Fortunately, there are some proven solutions to all the problems mentioned above.

Runtime Crash - how to fix it?

Many players experienced a runtime crash when they have tried to launch the game in Windows environment or complained that Total War Saga Troy hangs / freezes from time to time during gameplay. Here's the solution to this problem:

The game does not detect the GPU correctly - how to fix it?

Some players reported the problem that Total War Saga Troy is unable to correctly detect the dedicated graphics card and tries to run on an integrated GPU. Fortunately, there's an easy fix to this problem: 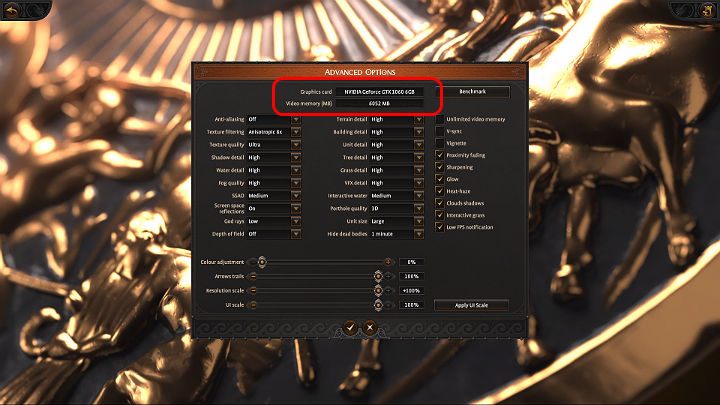 After performing the above steps, run the game, go to the advanced graphic settings and check whether the appropriate video card is displayed in the place marked in the picture above.

Black Screen - how to fix?

The black screen that suddenly appears when you are running Total War Saga Troy or trying to start a battle can be caused by many factors. Some players managed to solve this problem by reducing the quality of the displayed graphics, while others switched to play in the window mode (hit Alt + Enter), and then set the appropriate resolution in order to restore the full screen mode. Another way is to minimize the game to the Windows level (Alt + Tab) and re-maximize it. If you've encountered such a problem it's worth trying these three methods.

Low resolution - how to fix it?

The problem of the low resolution of the displayed graphics in Total War Saga Troy is usually caused by launching the game in the so-called window mode, that is, not in the full-screen mode. You can enable the full screen mode in the game options or use the Alt + Enter shortcut.

Low number of FPS, game stutters - how to fix it?

Many gamers complained that the game had problems with low frame rates (FPS) and frame rate drop downs. Also, it sometimes stutters so much that it greatly hinders smooth gameplay. Here are some ideas on how to deal with that problem: