This chapter of the Total War Saga Troy guide has practical tips on battles - how to fight, how to build an army and use individual units, what strategies to use, and how to win a battle.

Battles are an essential part of Total War Troy - a well-trained army can occupy more provinces and settlements, defeat your enemies, gain additional valuable resources, and help you expand your faction. Playing the tutorial battles won't prepare you for a fight with a real opponent. Read the text below to learn about the combat mechanics in Total War Troy, what are the key stats of units and their roles, how to fight, and of course, how to defeat the opponent!

Each unit available in Total War Saga Troy has specific statistics and a different number of fighters in their squad. Units differ in speed and maneuverability, resistance or damage. Pay particular attention to the following statistics:

Hero - their role in battle

The leader of your army, an Epic Hero, should be near the fighting troops to inspire them in battle and support them with his skills, which can, for example, give the units some vigor, rekindle their fighting spirit, or force the enemy troops to attack your hero directly. 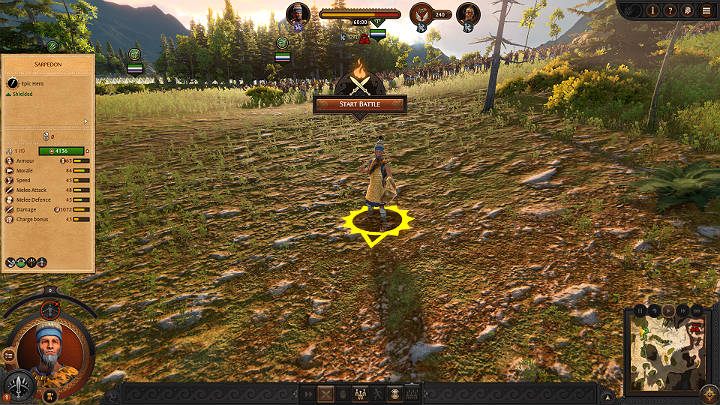 When choosing your hero, pay attention to his role, as some leaders will be perfectly suited for close combat due to their high armor ratio, high morale and enormous damage (Achilles), while others will be able to effectively decimate the enemy's troops from a distance (Paris).

You have to make sure that your hero doesn't die in combat. If that happens, your remaining troops will receive a huge morale penalty, which will make them unable to fight properly. They will also be more likely to surrender and flee in panic.

Infantry - they role in battle 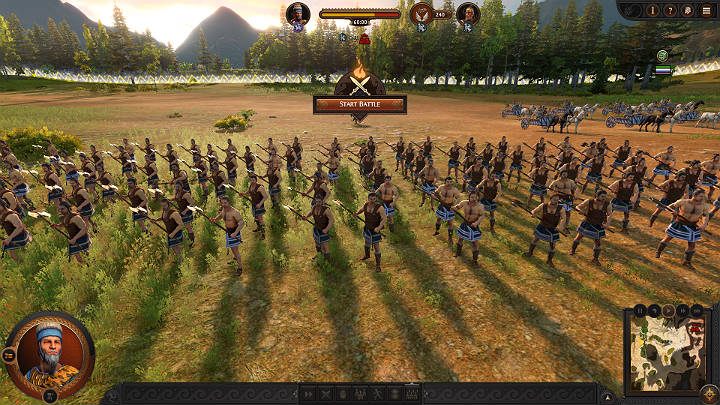 Range units - their role in battle

Range units are extremely helpful during battle because they can fire on enemy forces from a safe distance and decimate their troops. However, you have to pay particular attention to your targets. The best targets for an attack are units with low armor value and those without a shield, as they will not be able to protect themselves from incoming projectiles. These units will lose fast or their morale will fall enough to make them start to flee. 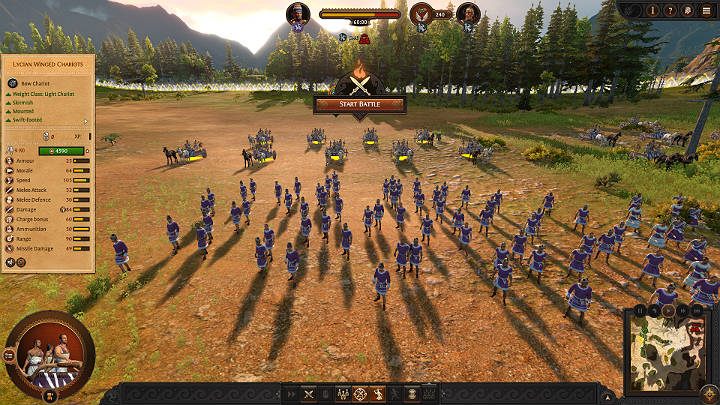 Ranged units have a limited number of projectiles so try not to waste them on wrong targets. If you manage to position your range units in such a way that they can shoot opponents in the back, these hostiles will not be able to protect themselves with shields.

Chariots - their role in battle

Chariots are powerful units that are able to attack unprotected enemy units (range units, light infantry units) and literally trample them as long as they attack from behind. What's more, chariots are excellent for chasing fleeing enemy troops because they are extremely fast and maneuverable. Unfortunately, if your chariots are caught in a pincer attack, they will quickly be destroyed - these units do not have high defense and will quickly fall under enemy pressure. 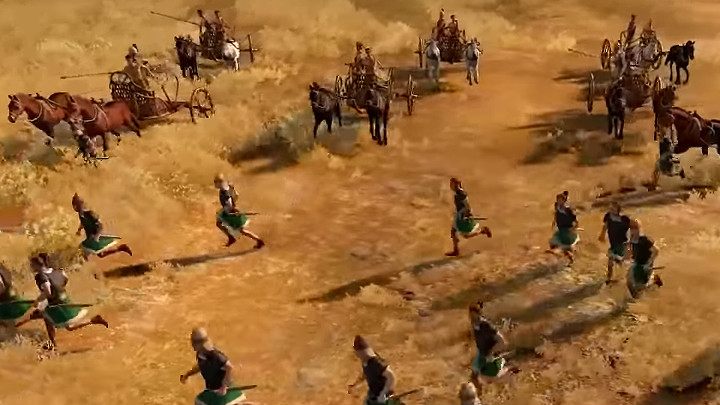 Before the battle begins, look around the area and see where you are fighting. Pay particular attention to strategic high points, tall grasses, forests, swamps, and other off-road obstacles that you can use to your advantage. For example, heavy infantry units will have problems with passing through muddy swamps while light units will not have any problems. 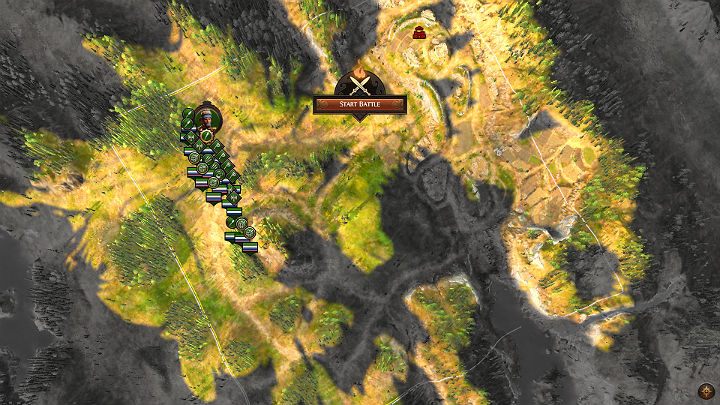 The image above shows a battlefield that consists largely of forests. The opponent defends access to their settlement so it is likely that most of their units were deployed behind the walls (although some of them may have hidden in the forest). In this case, you can try to hide your flanking troops in the forest on the right side of the map, and move the army's core to the left side of the battlefield. When the opponent notices the maneuver, they may be tempted to send more troops to the left and thus expose their back, which in turn is a great chance for your hidden troops to attack from behind.

Total War Saga Troy gives you plenty of strategies. Depending on the units in your army, you may be tempted to attack and crush your opponent with powerful and well-armored infantry units or take a defensive position on a hill, set up flanking units in the woods, or in tall grass and lure the opponent into a trap. What strategy you choose depends largely on the terrain and units your opponent has in their army - each faction has its strengths and weaknesses.

Pay attention to what units your opponent has. If they are using Hector's heavy infantry, it means they are not very mobile and prone to sudden maneuvers. You will have to use units with high armor penetration to deal with them. Paris forces are largely made up of range units so you have to find a way to get close and eliminate them, and so on. There are plenty of scenarios - as you go through the campaign, you will have to constantly modify your combat strategy.

Before the battle begins, it is important to ensure that your army is positioned in the right formation. Army formations in Total War Saga Troy can generally be divided into three main parts: the front line, the right and left flank, and the rear of the army, which consists of range units and possible reserves. 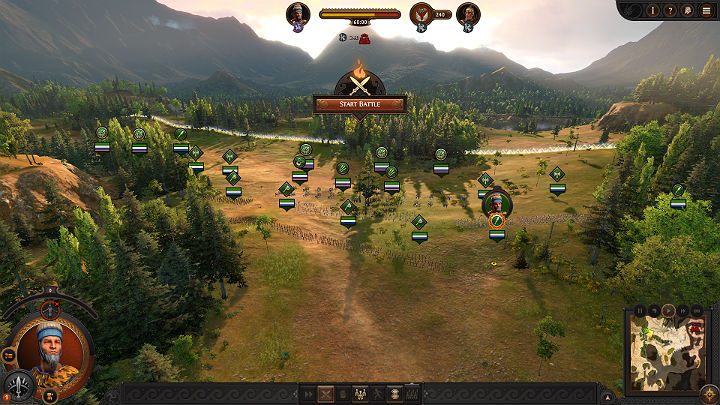 When selecting and deploying units in the front line, pay particular attention to their health level, armor, morale level, and whether they have a shield to effectively protect themselves from incoming projectiles. You should also see if they have other additional features such as invulnerability to flanking attacks. The first line of warriors should be wide enough so that the opponent won't be able to easily go around them attack the units behind. Range units, such as archers, slingers and javelinmen, should be at the back of your army, behind the front line - you don't want the enemy have easy access to them. Light, fast and agile units as well as chariots are excellent in the role of flanking troops, i.e. attacking from the side or from the rear. It should be noted here that an opponent attacked from the flank cannot defend effectively because the units' shields are directed in a different direction. 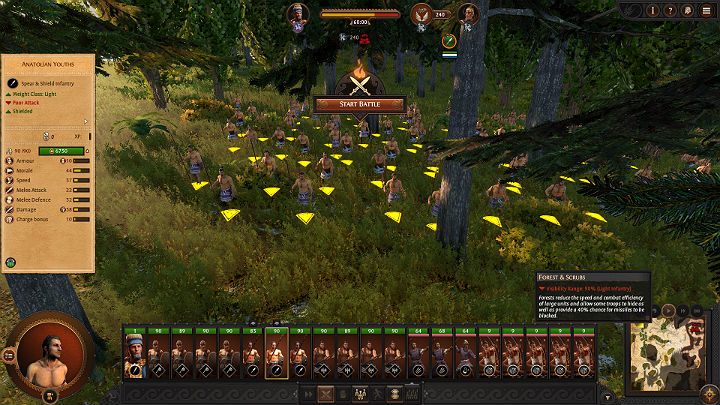 Flanking troops often have additional skills, such as stealth, hiding in tall grass or among trees, so they can stay hidden until they can launch a devastating attack on the unaware and defenseless enemy troops. It is also good practice to leave some versatile units in reserve to respond quickly to a potential attack from the flank or the back of your army.

When you start a fight, you must try to lead your units in such a way that they would allow them to gain an advantage over the enemies. This means that the front line should occupy the enemy infantry, and ranged units should fire on enemy troops that do not have a shield. 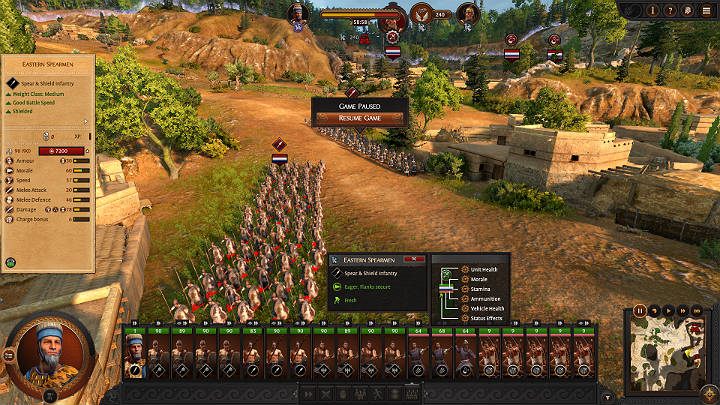 Fortunately, the moment the enemy army moves to attack, you can quickly figure out what type of units the opponent has sent to battle. If you are a novice player you can stop the game at this point and take a good look at the enemy troops, as well as check their stats and decide which units to send against them. 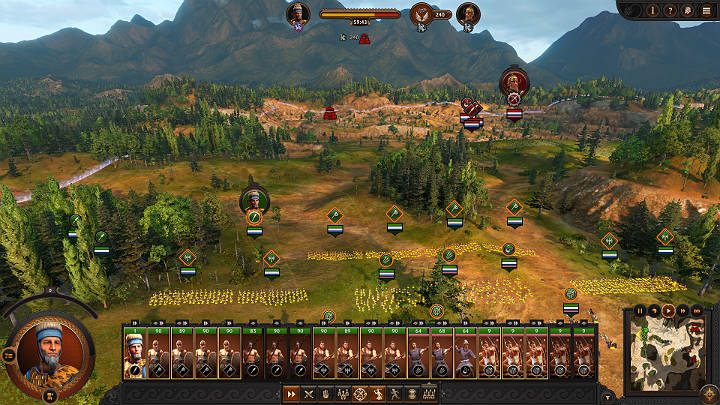 Try moving your troops around the battlefield in such a way as not to break their formation, which you carefully set before the battle began. To do this, you must select troops (or the entire army), hold the Shift press RMB on the selected location. As soon as you release the mouse button, you will notice yellow lines on the battlefield indicating the direction of your army's movement. Use flanking units only when there is a chance to surprise the enemy and hit them from the side or to carry out a crushing charge from the back - enemy units caught in the pincer attack will receive more damage and lose morale. 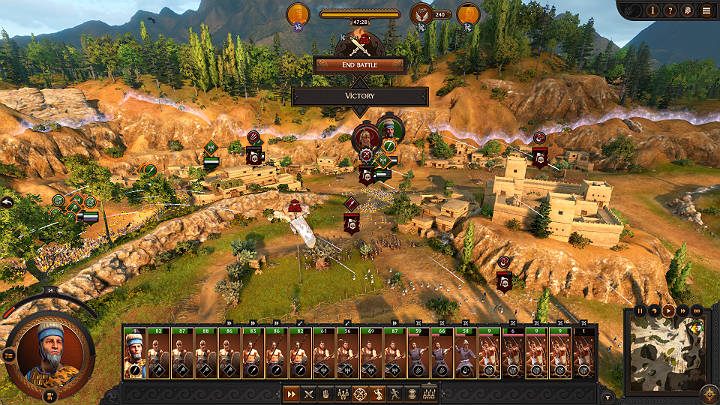 You can win battles in Total War Troy in several ways. The first way is to completely wipe out the enemy troops and their leader. The second way is to keep fighting until you exhaust the enemy and force them to retreat. The third way involves occupying the settlement and waiting for the opponent to starve to death. 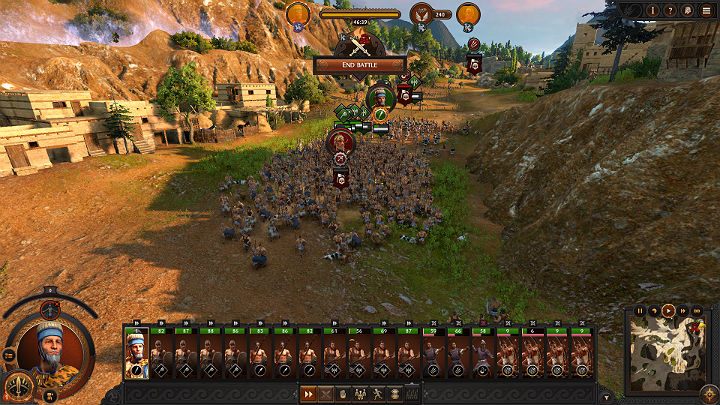 When you force your opponent's troops to retreat, you will see a Grim Reaper icon under the units' and leader's icons. This means that the opponent has lost his fighting spirit, surrendered, and is trying to escape the battlefield. You can then decide to end the fight or pursue the enemy and kill everyone - this will give you additional experience points.