This chapter of the guide focuses on the epic heroes available in Total War Saga Troy. You will also learn which regular heroes you can recruit during the game, and what potential subclasses they may have.

In Total War Saga Troy, each faction is led by certain epic heroes which makes them the main characters led by the player. At the time of writing this guide (August 2020), the player is able to control one out of the 8 Epic Heroes:

Playable Epic Heroes (faction leaders) such as Achilles or Aeneas may recruit additional Heroes into their ranks. All of the characters featured in Total War Saga Troy are assigned to a specific class that determines their playing style and role on the battlefield. Each character may also have an additional subclass, which further affects his or her playstyle. At the time of writing this guide (August 2020), Total War Saga Troy had 4 main character classes:

It should be noted here that each faction has a specific Hero class that cannot be recruited. For example, Agamemnon can't recruit Fighters while Achilles can't recruit Warlords.

How to level up?

Heroes in Total War Saga Troy can earn experience points for winning battles which help them advance to the next levels. They unlock skill points that can be spent on additional skills or perks. 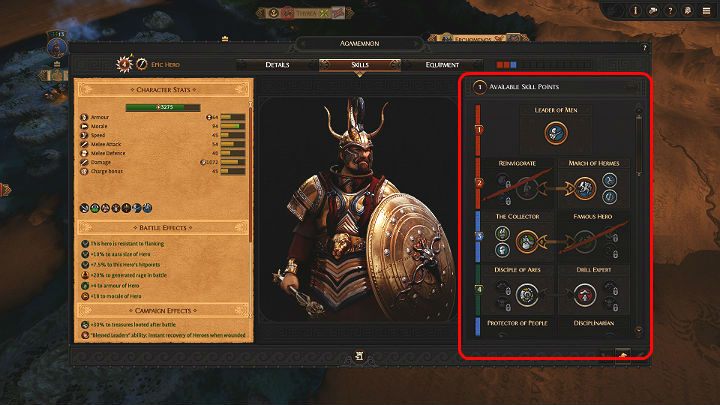 As you can see in the image above, the epic hero Agamemnon has reached level 4 and received one skill point, which can be spent on a new skill. Every time your hero gains a new level, you can choose one of the two available skills. However, you have to choose wisely because choosing one skill automatically blocks access to the other. The same goes for the perks of a given skill - choosing one will block access to the other.

You get access to individual hero skills by reaching certain levels. This means that you don't have to choose any of the skills available at level 4 if you do not plan on using them. You can keep the points and then spend them on skills and perk that you unlock later.