This chapter of the guide focuses on Sarpedon, one of the epic heroes in Total War Saga Troy. What is the character's specialty, for whom he will be the best choice, what bonuses he has, and what unique faction units he can recruit.

Sarpedon (King of Lycia) is an Epic Warlord who leads the Lycia faction. With his leadership skills and melee skills, he creates fear in the ranks of the enemy and is able to strengthen his troops by increasing their will to fight. Sarpedon has access to a unique mechanic - the player can accumulate and invest resources in provinces to provide the entire faction with bonuses and unique artifacts: battle bonuses, increased influence and divine will, reduced construction costs, and reduced erection time for all buildings. Sarpedon is an excellent character for all players, who like to use trade and diplomacy. 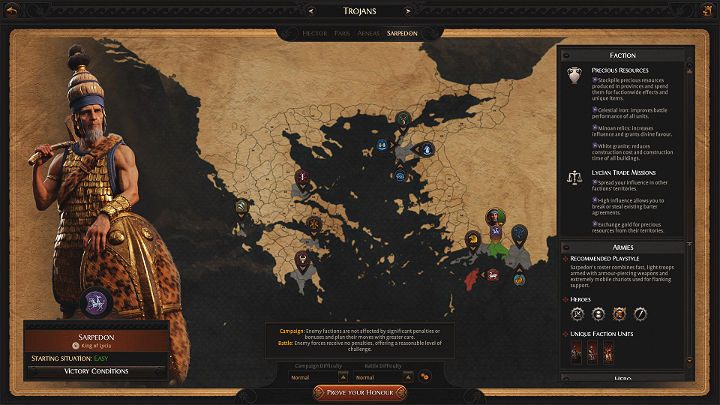 Playing as Sarpedon, you get a +5% bonus to the speed of movement for chariot units. Moreover, Sarpedon is the only epic hero who received a +10 rating bonus for all diplomatic contracts (not including exchange agreements).

Sarpedon's troops are primarily fast and light units with a high armor penetration rate. Sarpedon also has access to extremely mobile and menacing chariots, which are excellent for carrying out attacks from the flank.

During the course of a Total War Troy campaign, your character will gain experience points, advance to higher levels, and consequently receive skill points, which can be spent on additional skills and specializations. The following is a list of Sarpedon's skills that may come in handy during this character's campaign.

To complete the above Sarpedon character build in Total War Troy you will need 25 skill points. Each skill point spent increases the hero's health pool by 2.5%.