This chapter of the guide focuses on Paris, one of the epic heroes in Total War Saga Troy. What is the character's specialty, for whom he will be the best choice, what bonuses he has, and what unique faction units he can recruit.

Paris (Prince of Troy, brother of Hector) is an Epic Archer who leads the Paris of Troy faction. Like his brother Hector, Paris also boasts exceptional leadership abilities. Paris prefers ranged combat - he has mastered the art of using the bow. Paris is an excellent hero for all players who prefer to avoid close-quarters combat and are best at fighting at a distance. 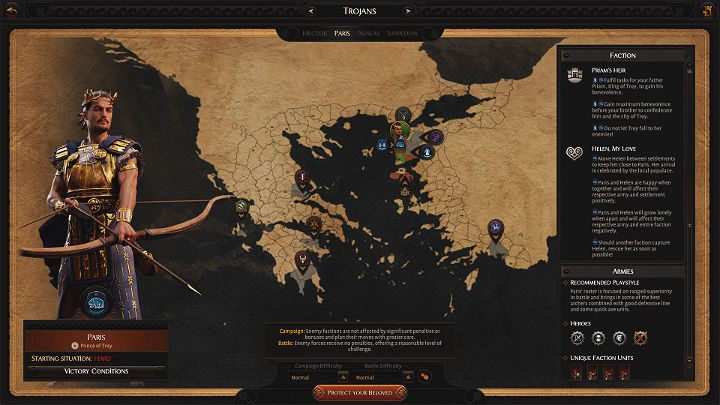 As a Paris, you get a +10% bonus to damaged done with ranged weapons. What's more, as one of the two epic heroes, Paris received the extremely valuable +5 bonus to gold earned every turn.

Paris's troops are trained primarily for effective long-distance combat. If you decide on playing as Paris of Troy faction, you will get access to some of the best archers available in Total War Saga Troy. Your army will also have fast warriors with axes and great defensive units.

During the course of a Total War Troy campaign, your character will gain experience points, advance to higher levels, and consequently receive skill points, which can be spent on additional skills and specializations. The following is a list of Sarpedon's skills that may come in handy during this character's campaign.

To complete the above Paris build in Total War Troy you will need 26 skill points. Each skill point spent increases the hero's health pool by 2.5%.