This chapter of the guide focuses on Odysseus, one of the epic heroes in Total War Saga Troy. What is the character's specialty, for whom he will be the best choice, what bonuses he has, and what unique faction units he can recruit.

Odysseus (Ruler of Ithaca) is an Epic Archer and unparalleled sailor who leads the Ithaca faction. Odysseus is an extremely clever warrior who uses various tricks and prefers guerrilla tactics over a frontal attack. Odysseus' faction has the ability to build spy hideouts in hostile settlements, allowing them to recruit additional troops in foreign regions. Odysseus is an excellent hero for all players who, instead of direct attack, prefer guerrilla warfare and like to defeat their enemy by being cunning rather than using raw strength. 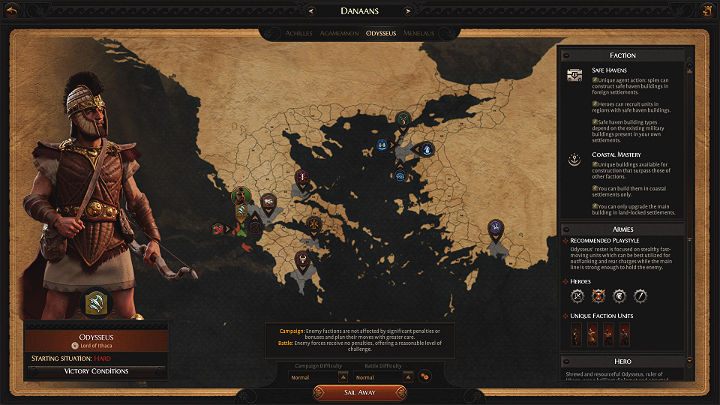 By playing as Odysseus, you will get a +12% bonus to movement range for sea units on the campaign map. Moreover, due to his sailing skills, Odysseus provides his troops with a +5 bonus to morale during sea battles.

Odysseus' troops are largely composed of fast units that are capable of using the terrain to their advantage, carrying out deadly attacks from the flank or the rear. This does not mean, however, that the Ruler of Ithaca does not possess any units that can hold the enemy on the front-line.

During the course of a Total War Troy campaign, your character will gain experience points, advance to higher levels, and consequently receive skill points, which can be spent on additional skills and specializations. The following is a list of Odysseus ' skills that may be useful during the course of this hero's campaign.

To complete the above Odysseus character build in Total War Troy you will need 25 skill points. Each skill point spent increases the hero's health pool by 2.5%.