This chapter of the guide focuses on Menelaus, one of the epic heroes in Total War Saga Troy. What is the character's specialty, for whom he will be the best choice, what bonuses he has, and what unique faction units he can recruit.

Menelaus (King of Sparta) is an Epic Defender who leads the Sparta faction. Menelaus is a powerful commander and has access to a unique Call to Arms skill that allows him to recruit units from a list of defensive or military allies from anywhere on the map. With such a mechanic, you will be able to create a powerful, unique, and custom army. Menelaus is an excellent character for all strategists who, during the course of the game, prefer to use diplomacy to forge alliances that will expand the boundaries of their empire. 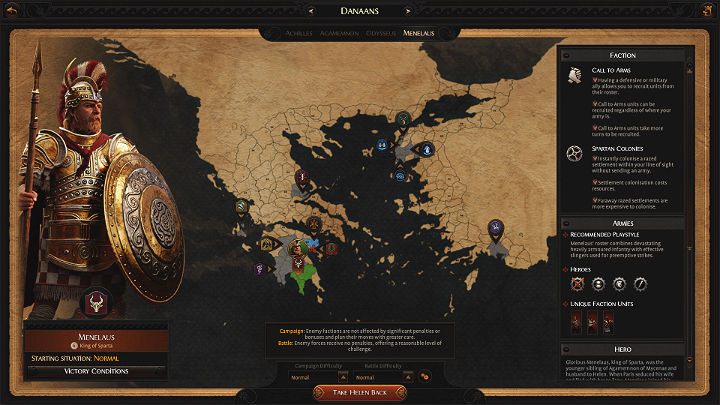 As Menelaus, you get a +2 bonus to newly recruited Heroes' morale. Moreover, because of his leadership abilities, Menelaus has a +4 bonus to influence in his region.

Menelaus' army consists largely of a combination of heavy-armed infantry capable of carrying out devastating attacks and deadly slingers who specialize in ranged combat.

During the course of a Total War Troy campaign, your character will gain experience points, advance to higher levels, and consequently receive skill points, which can be spent on additional skills and specializations. The following is a list of Menelaus ' skills that may be useful during the course of this hero's campaign.

To complete the above Menalos build in Total War Troy you will need 26 skill points. Each skill point spent increases the hero's health pool by 2.5%.