This chapter of the guide focuses on Hector, one of the epic heroes in Total War Saga Troy. What is the character's specialty, for whom he will be the best choice, what bonuses he has, and what unique faction units he can recruit.

Hector (Prince of Troy, brother of Paris) is an Epic Defender who leads the Hector of Troy faction. He is a noble warrior and an unparalleled diplomat who was trained from birth to lead his father's troops. Hector sows fear in the hearts of his opponents, and thanks to his cunning and bravado, he is able to change the fate of many fights. Hector has access to some of the best bronze units in the game so he may prove to be a really challenging opponent at a later stage of the game. He is the perfect hero for all war strategists, who prefer to focus on the defensive, weakening the opponent, and then finish them off. 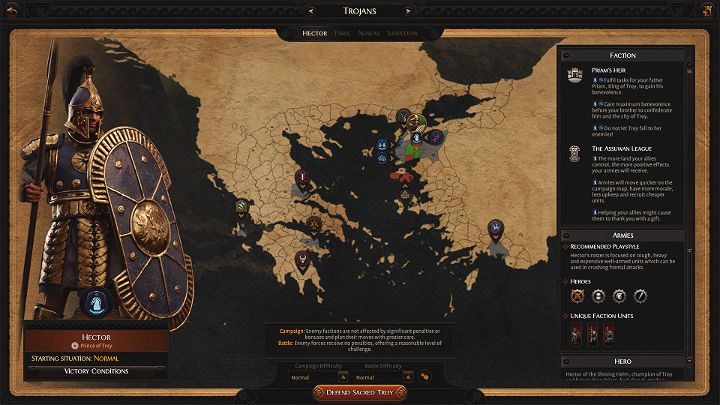 As Hector, you gain a +10% bonus to the morale of all units in your own territory. Moreover, Hector is one of the two Epic Heroes with a +5 bonus to gold earned every turn.

During the course of a Total War Troy campaign, your character will gain experience points, advance to higher levels, and consequently receive skill points, which can be spent on additional skills and specializations. The following is a list of Hector's skills that may be useful during the course of the character's campaign.

To complete the above Hector character build in Total War Troy you will need 24 skill points. Each skill point spent increases the hero's health pool by 2.5%.