This chapter of the guide focuses on Agamemnon, one of the epic heroes in Total War Saga Troy. What is the character's specialty, for whom he will be the best choice, what bonuses he has, and what unique faction units he can recruit.

Agamemnon (King of Mycenae) is an Epic Warlord who leads the Mycenae faction. He is an excellent strategist and one of the best commanders - Agamemnon can assist his troops with additional support skills during combat. Because of his obsession with power, Agamemnon does not care about others' opinions. Instead, he tries to force everyone into obedience. Thanks to this he receives extra resources from his vassals. Agamemnon is the perfect hero for all who want to conquest other territories, increase their influence, and impose their will. 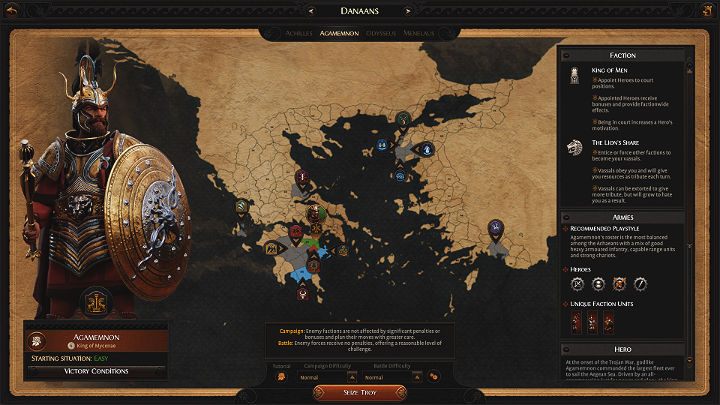 As Agamemnon, you get a +12% bonus to efficiency for the royal decrees which will help your economy. Moreover, because of his status and power, Agamemnon gains a +4 bonus to influence in his regions.

Agamemnon's troops can be considered extremely balanced, able to cope under any conditions. King of Mycenae has at his disposal armored infantry, great ranged units, and chariots.

During the course of a Total War Troy campaign, your character will gain experience points, advance to higher levels, and consequently receive skill points, which can be spent on additional skills and specializations. The following is a list of Agamemnon's abilities that may be useful during the course of this hero's campaign.

To complete the above Agamemnon character build in Total War Troy you will need 22 skill points. Each skill point spent increases the hero's health pool by 2.5%.