This chapter of the guide focuses on Aeneas, one of the epic heroes in Total War Saga Troy. What is the character's specialty, for whom he will be the best choice, what bonuses he has, and what unique faction units he can recruit.

Aeneas (Ruler of Dardania) is an Epic Fighter who leads the Dardania faction. Aeneas is the only epic hero available in Total War Saga Troy able to interpret divine will - he can use their support during battles. Furthermore, Aeneas can ask the souls of dead warriors for advice and thus receive various effects. Aeneas is the perfect hero for all who want to be as close to the Olympic gods as possible and win the battles thanks to their graces. 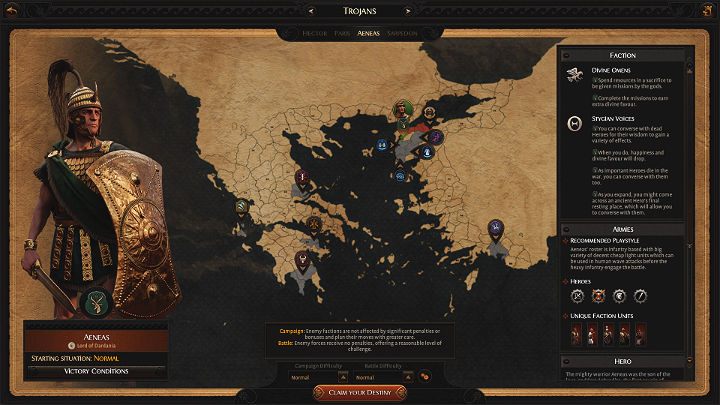 By playing as Aeneas, you will get a +1 bonus to Aphrodite's favor every turn (the Goddess improves diplomatic relations and contributes to population growth). His second bonus is -10% to the cost of living for all light infantry units.

Aeneas' army is mainly composed of a large number of infantry units. Since light troops do not cost much, Aeneas has countless units at his service, which can even flood the enemy with sheer numbers, tie them up in battle, and pave the way for heavier units.

During the course of a Total War Troy campaign, your character will gain experience points, advance to higher levels, and consequently receive skill points, which can be spent on additional skills and specializations. Below is a list of Aeneas ' skills that you'll use during the course of this hero's campaign.

To complete the above Aeneas character build in Total War Troy you will need 26 skill points. Each skill point spent increases the hero's health pool by 2.5%.