This chapter of the guide focuses on Achilles, one of the epic heroes in Total War Saga Troy. What is the character's specialty, for whom he will be the best choice, what bonuses he has, and what unique faction units he can recruit.

Achilles (Leader of Myrmidons) is an Epic Fighter who leads the Phthia faction. Achilles is an offensive warrior who is always in the center of the fight. However, he is plagued by conflicting emotions. He often switches between feelings of rage (increases the strength of the army at the expense of reducing the efficiency of the economy), grief (a bonus to divine will and experience at the expense of faction satisfaction) and outrage (increased efficiency of the economy, a bonus to the faction's satisfaction, but at the expense of the chances of concluding diplomatic agreements). Achilles' emotions that affect the entire faction. Because of his temperament and unpredictability, Achilles is the perfect hero for those who like to take a risk. 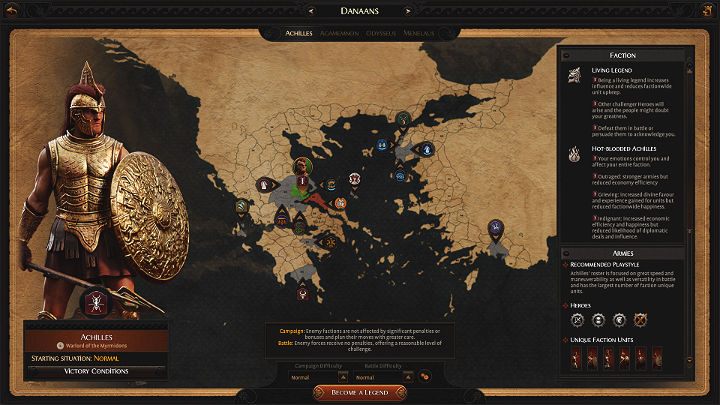 Achilles has a melee bonus - all units under your command will receive a +4 during the attack. Moreover, when fighting in the local province, enemy armies will receive a -5% morale debuff, making them slightly easier to defeat.

The units led by Achilles are extremely fast, efficient, and versatile - this helps them adapt to the current situation on the battlefield. It is also worth noting that Achilles' faction can recruit far more unique troops than other factions.

During the course of a Total War Troy campaign, your character will gain experience points, advance to higher levels, and consequently receive skill points, which can be spent on additional skills and specializations. The following is a list of Achilles ' skills that may be useful during the course of this hero's campaign.

To complete the above Achilles character build in Total War Troy you will need 25 skill points. Each skill point spent increases the hero's health pool by 2.5%.