In this chapter of our guide you can learn how to make alliances in the Total War Saga Troy and what types of alliances there are available in the game.

During your adventure in Total War Saga, from time to time you will have to form alliances with other factions to increase your military power and authority in a particular region. This is especially important at the beginning of the story campaign. For example, when you will not be able to conquer a well-defended settlement alone or you need additional resources to develop your faction. Making alliances is obviously related to diplomacy. Below we suggest how to negotiate with potential allies.

Alliances - how to form?

In order to form an alliance with the leader of another faction you will need to develop a positive relationship with them. It's rather obvious that enemies won't be interested in making any agreements with you. After you open the diplomacy window (7 key by default), you will notice which factions have friendly relations towards you (green helmet icon) and which remain hostile (red helmet icon). 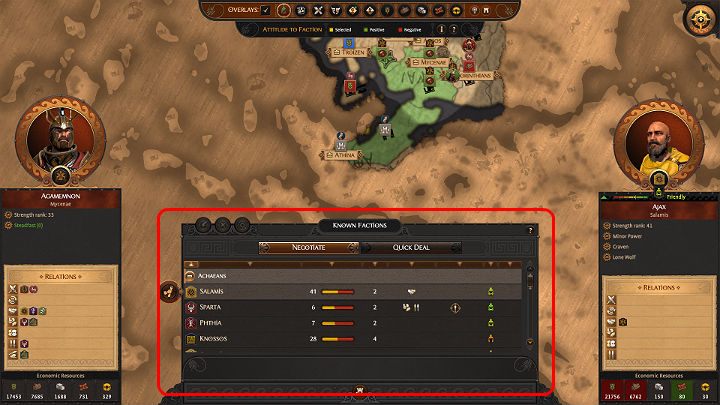 In the diplomacy window you can also check how the power of your army is shaping up in comparison to other factions. This is useful, for example, when you want to threaten particular leaders and factions - you may try to declare a war against them. You may offer various types and forms of alliances to other leaders or threaten them with military actions, namely: 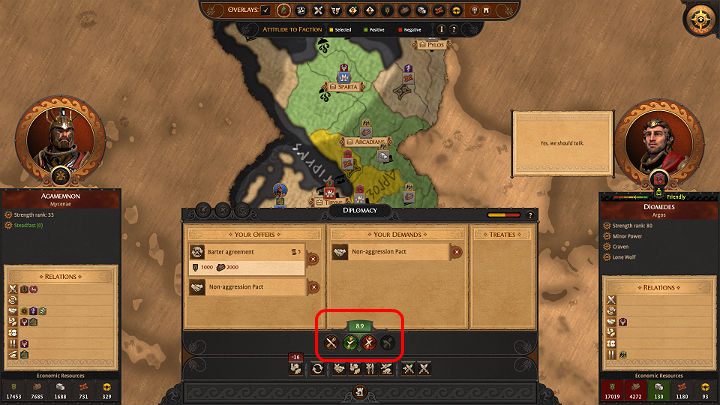 When you want to offer another leader an alliance or come forward with a proposal for another deal, you have to be aware that they won't always be willing to accept its terms without additional negotiations. Every leader wants to save as much for his people as possible so you have to be prepared for tough negotiations and sometimes even serious threats. When you propose a specific type of contract to a particular faction, you will immediately notice the chance of contract's approval - green values above 0 mean that the faction is more likely to accept your offer.

You can improve your relations with other factions, for example, by signing favorable trade agreements or accepting other types of cooperation: supporting their allies, declaring war on enemies, etc.