On this page of our game guide to Total War Saga Troy you can find a set of starting tips. These tips should help you start your adventure with the game, improve your military operations, improve the expansion of your settlements, and explain some key mechanics of the game.

In Total War Saga Troy there are 5 types of resources: food, wood, stone, bronze, and gold. Because some of them are more difficult to obtain than others, such as stone or bronze, you will not be able to constantly recruit units of one type. For example, if you want to recruit a lot of heavy armored warriors you need a lot of bronze. On the top resource bar, which is located in the top left corner of the screen, you can find the current state of your vault and also additional data representing the growth rate of a particular resource per round - look there before you start recruiting or before you start planning to expand your settlements. If you already need a certain amount of raw materials to upgrade an important building to the next level you can always try to make a trade offer to another hero. 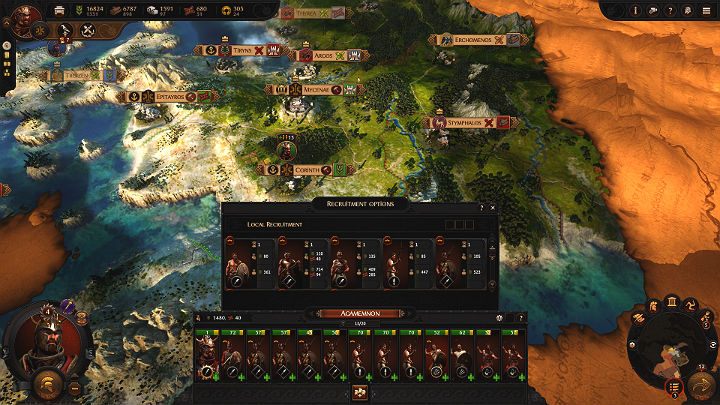 Decrees are an additional way to improve the economy of your province, because you can increase the amount of resources that flow into your treasury with each turn. Moreover, the relevant decrees also affect the satisfaction of the residents and increase the combat capabilities of your troops. The decree takes several rounds, but it's worth checking them in every now and then to strengthen your faction. 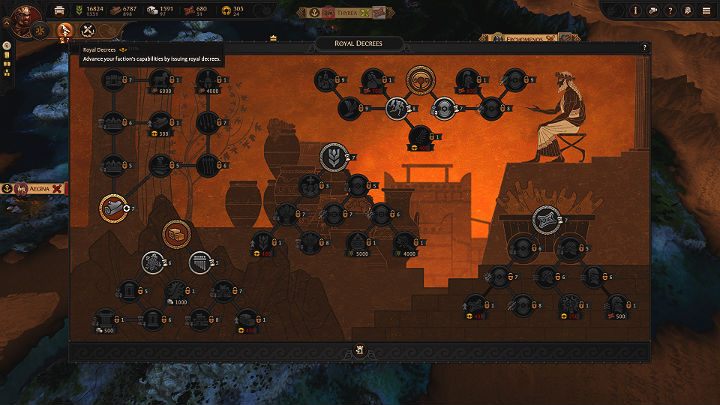 Weather conditions in the Total War Saga Troy affect how your units will cope on the battlefield. You won't always have an opportunity to fight in perfect conditions, so you have to be prepared for possible impediments, such as rain. During combat in the rain, exhausted units need more time to recover from fatigue when they remain in idle state. As the aggressor who starts the battle, you can try to draw better weather conditions and increase your chances of winning.

Before starting a battle, make a quick reconnaissance of the battlefield and check the terrain. If possible, set up your ranged units on hills to use the advantage of height, haunt your opponents with flank attacks and hide key light-type units in the woods. Also, watch out for some inconveniences, such as mud, which may severely slow down armored units. However, light infantry can pass through it without any problem. The tall grass, on the other hand, is a great hiding place for units specialized in sneaking. 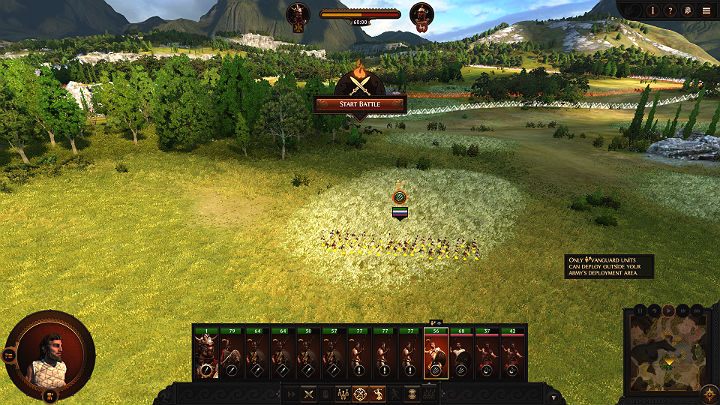 When you increase your influence in a particular province and make alliances, you will often get suggestions from other characters controlled by AI. Among the messages you will receive are - requests to sign a non-aggression pact or a trading proposals. It is worth pointing out here that you do not have to agree to every offer presented to you, because you can always negotiate some better conditions. Before you make a non-aggression pact with someone, consider whether you want to attack a particular character. Remember that sometimes turning down a diplomatic offer comes with discontent, and other characters can declare open war on you. 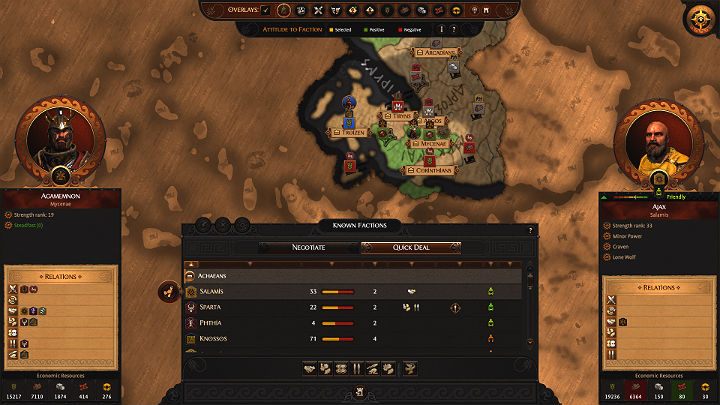 Each type of unit in Total Watt Saga Troy has a specific icon attached to it so you can quickly figure out where specific units are fighting. For example, light troops like archers or swordsmen have a circle-shaped icon, while those more armored ones have a rhombus icon. In these icons there is also an image of the weapons that the unit uses, such as spears, swords, axes. Heroes on the battlefield are very well visible because they are distinguished by a very large circle-shaped icon with their picture. 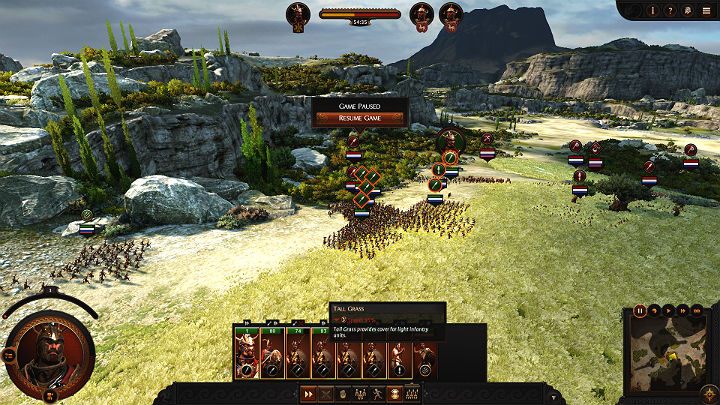 Ranged units, such as spear-men, have limited number of projectiles. Once the ammo gets exhausted, they will have to engage in melee combat. The best targets for ranged units are other ranged units or light infantry. Shooting at units with a shield is unfortunately a loss of time and ammo - the enemy troops will be able to protect themselves from receiving damage.

Total War Saga Troy offers players to play quick battles without having to manually deploy troops, issue orders, etc. If you are fighting against a very weak opponent you can choose to do so and save some time. In the case of major battles, when the overall strength of the armies is similar, it is better to take the matters into your own hands. 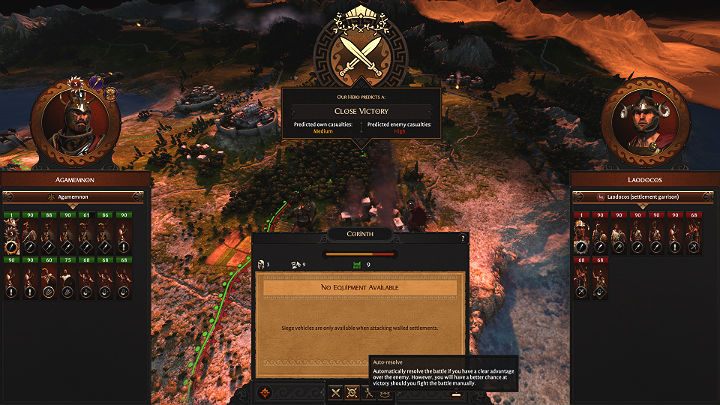 Time management during the battle

During the course of the battle, you can use a pause, analyze the current situation and issue appropriate orders to your troops. As the troops move around the map, you can also speed up that movement to save some time.

Each hero has additional skills that can affect your soldiers or your opponent's troops. After the hero has advanced to the next level, you will also be able to choose another skill for him. Some of them boost army morale and can heal units, while others can force a chosen target (standard units, not applicable to other heroes) to attack, for example, your hero. The special abilities of heroes have to charge up during combat and have a specific cooldown, so they cannot be used many times in a row. 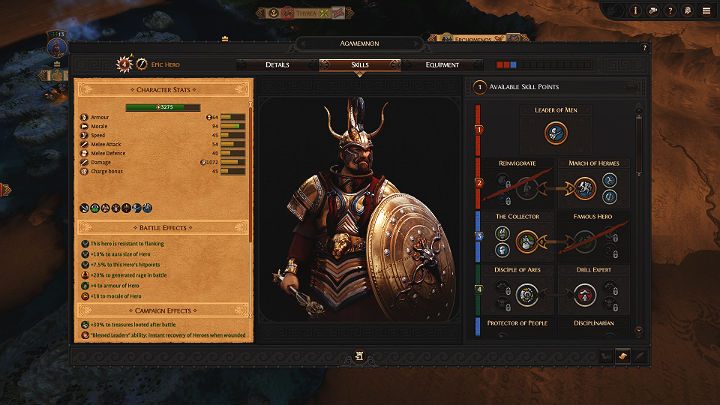 Try to capture the settlements you encounter on your way to acquire additional resources and train additional military units. Uncolonized settlements can be acquired for the right amount of raw materials, usually food, wood, and stone. Previously occupied settlements will defend themselves - you can fight them or start a siege. If the chances of victory seem even for both sides, then you may have to take part in two battles in order to conquer a specific territory. After winning the battle, you can choose the occupation option and start managing the settlement. 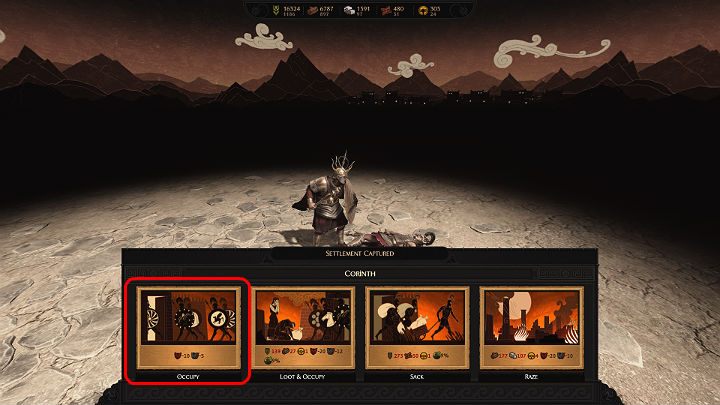 There are several battle scenarios in the Total War Saga Troy. Combat can be won by eliminating enemy troops or by forcing them to flee. Interestingly, the fleeing opponent can be chased and finished off - you will get extra experience points for it. When the fleeing units manage to get out of the battlefield, you will not be able to catch them. However, they also cannot re-enter the ongoing battle.