Merecasters are unique items found in the world of Torment: Tides of Numenera, enabling us to take part in meres - interactive visions that include dialogues and allow us to choose how we want to behave (sometimes utilizing one of our exploration skills). Some of the meres offer a reward once completed (most frequently, experience points) or their completion is a pre-requisite for certain quests. This chapter contains the list of all merecasters and their locations, as well as further details. 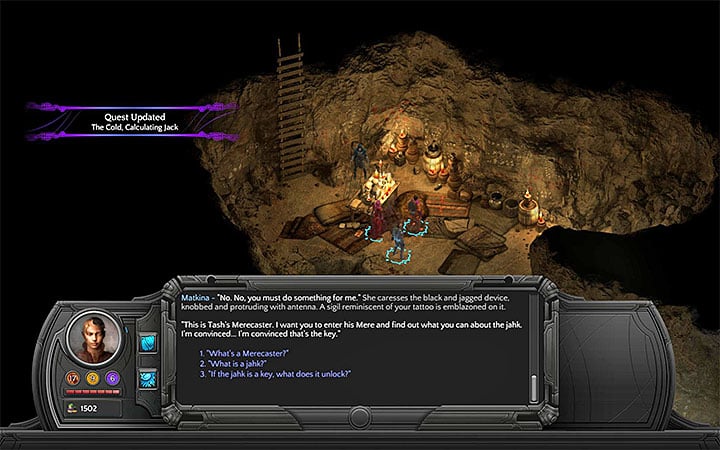 Using Tash's Merecaster is a mandatory part of The Cold, Calculating Jack

Tash's Merecaster is one of those merecasters that are encountered in the course of the main quest. Taking part in the mere is one of the objectives of The Cold, Calculating Jack in Sagus Cliffs. Proceed with the quest up to the point where you've found Matkina hiding in Cave of Last Words (M7.6). Talk to her to retrieve the device and complete the mandatory mere. 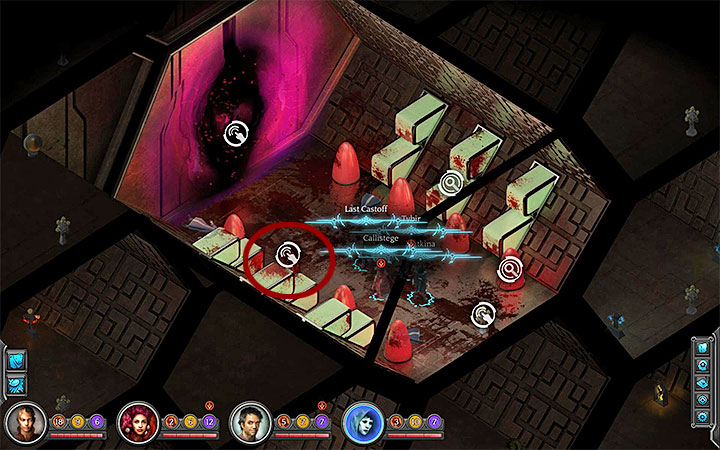 Twisted Metal Merecaster can be found in Marcysa's Tomb, one of the tombs stored in the Necropolis (M13.3.) You'll visit the tomb during Severed Child and Endless Horror. To access the room, input 1254 on the Necropolis' terminal. The merecaster can be found in the container marked on the screenshot above - you'll need to investigate the container, read the inscription found on it, and touch the symbol. 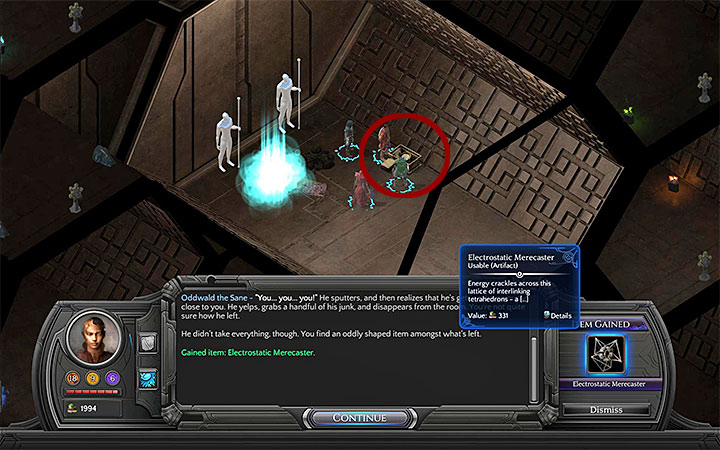 Electrostatic Merecaster can be found in Oddwald's Tomb, a part of the Necropolis visited during Severed Child, a side quest began by investigating a crystal found in Valley of Dead Heroes (M12.14). To access the tomb, input 5143. To retrieve the merecaster, open the container marked on the screenshot above. 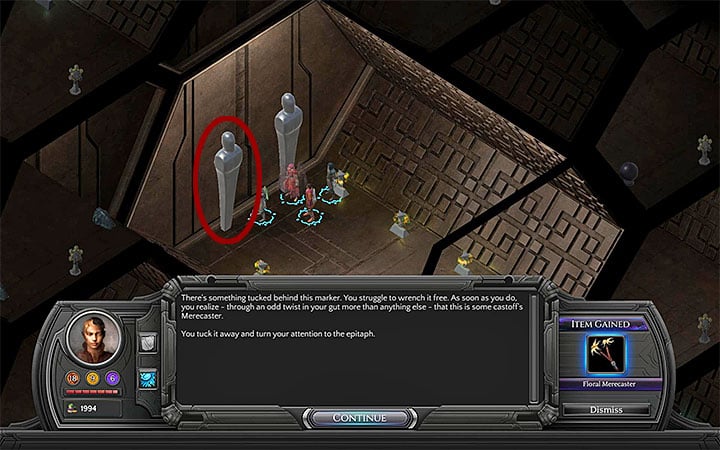 Floral Merecaster can be found in one of the graves underneath the Necropolis. To find the grave, input 4135 on the Necropolis' terminal. Once you've accessed the room, take a look at two strange objects located by the outer wall - one of them will yield the item. 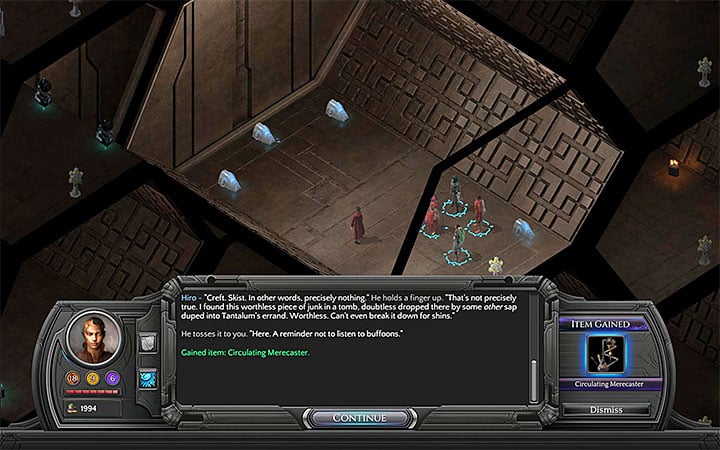 Circulating Merecaster can be found in one of the tombs found in Necropolis. By default, finding the merecaster involves visiting tomb 4443. You should encounter Hiro, a tomb raider who've found a seemingly worthless item. In case the man isn't there, it means that you have to continue searching the tombs (random ones will do) until you come across him. Talk to him and ask about his current finds, and he will hand over the merecaster. 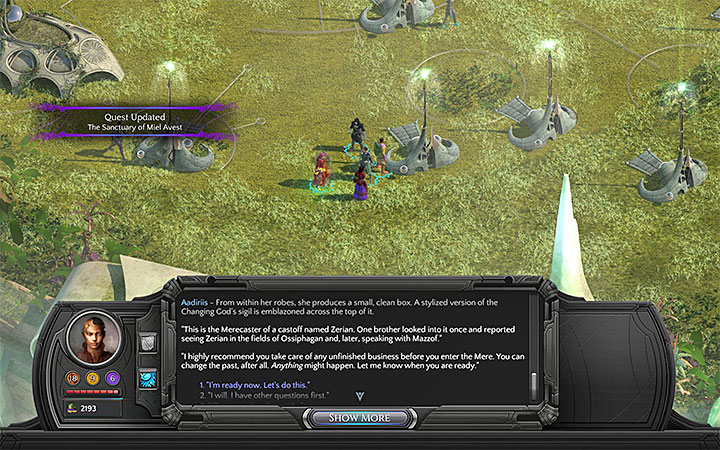 Zerian's Merecaster is one of those merecasters that are encountered in the course of the main quest. The first part of The Sanctuary of Miel Avest sees you take part in a mere. Talk to Aadiriis in Miel Avest (M14.5) to acquire the merecaster. 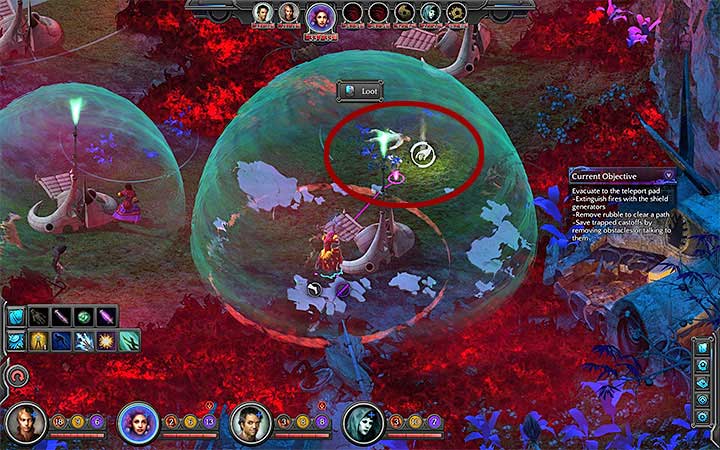 Kaleidoscopic Merecaster can be found during the second part of The Sanctuary of Miel Avest (during which Sanctuary is besieged by Sorrow's forces). The merecaster can be easily missed, as there is only a small window of opportunity to acquire it. To get the item, send one of the party members east to find the corpse (M14.12) that can be seen on the screenshot above. Look the corpse to receive the merecaster 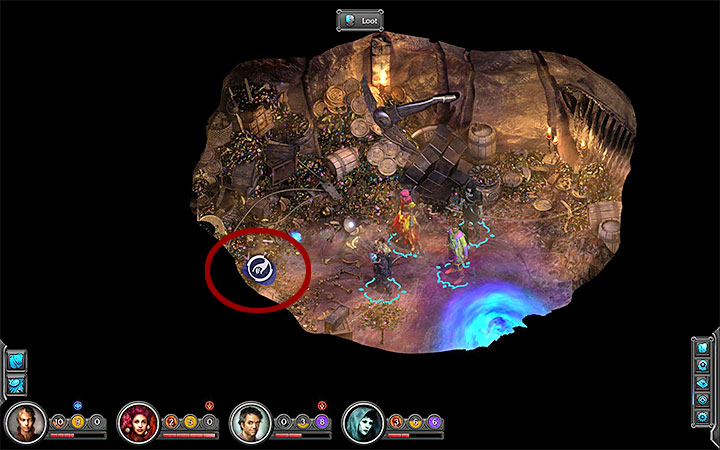 Astronomic Merecaster can be found through simple exploration of one of the locations - the item can be found in Murden Lair, a part of the Old Slave Block in Bloom (M17.8) (to get more details, visit Where Do I Find the Murden Treasure Room and How Do I Get Inside? in Puzzles and Additional Activities section. The merecaster is stored in the container shown on the screenshot above. 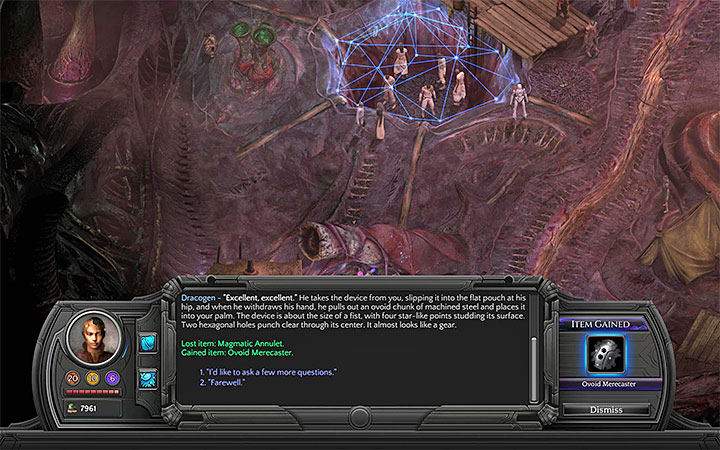 Exchange one of the items for the Ovoid Merecaster

Ovoid Merecaster is a one of possible rewards of Dracogen's Price, a quest began in Memowira's Courtyard in Bloom (M15.1). Dracogen will ask you to retrieve one of two artifacts - Magmatic Annulet or the Navigative Cortex. The main quest asks the player to bring one of the artifacts. To get the merecaster, you'll need to find both items - the second one can be exchanged for the merecaster (alternatively, sell the item to acquire some shins) 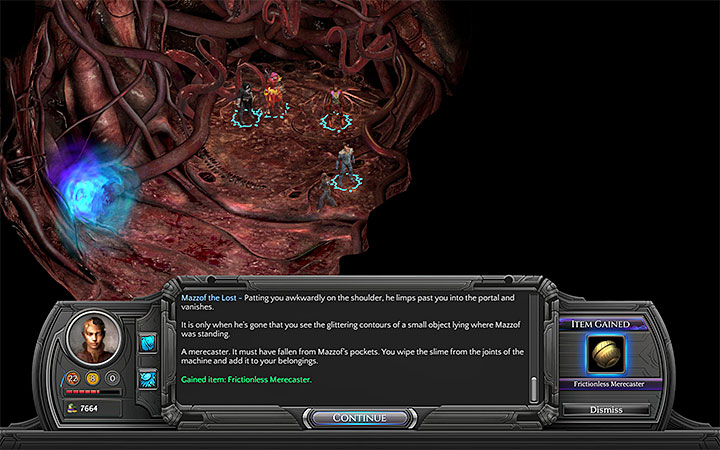 Frictionless Merecaster can be found during the course of the main quest. You'll receive it during Into the Depths, regardless of your choices made during its course. The item will be given (or left) to you by Mazzof the Lost once you free him in Bloom's Heart (M24.5). 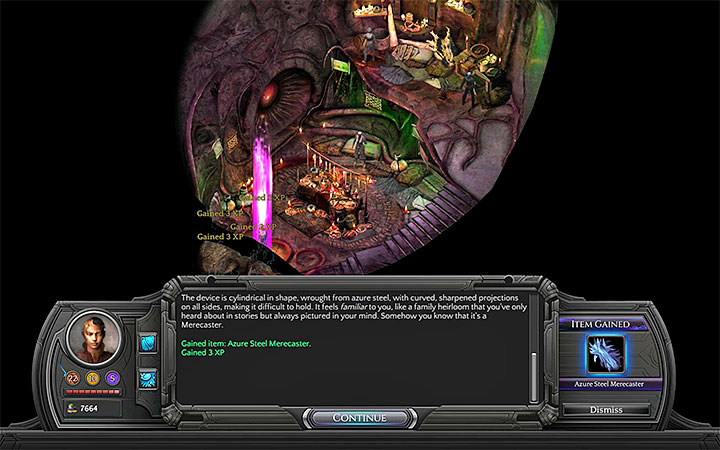 Check the altar and find the merecaster

Azure Steel Merecaster can be found in Shrine of Chilla, one of the points of interest in Vast Interior (M16.2). To find it, you'll need to investigate the altar covered with offerings (one of the available actions involves taking a look at the said device). Sometimes, the first attempt can end up with nothing instead of the expected item. In such case, try to return to the shrine when you've advanced a bit in game, e.g. after the end of Into the Depths.